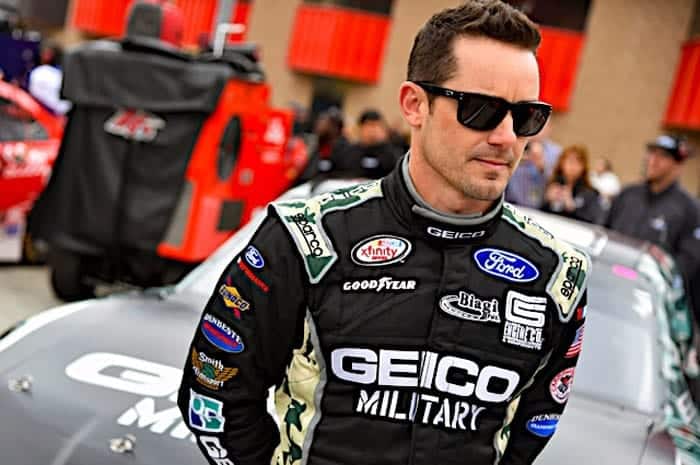 Aric Almirola piloted the No. 98 Ford for the team, winning the opening stage, as well as claiming the trophy at the end of the afternoon. The Florida native was out front for 13 laps, picking up his second win on a restrictor plate track in the last three XFINITY Series plate races.

The victory was huge for both Fred Biagi, owner of Biagi DenBeste Racing, and the entire organization. There are 13 employees total that work on the No. 98 car, but Mears was left out as he did not have the opportunity to race at Talladega.

Just prior to the 2017 season began at Daytona International Speedway, Mears inked a deal to compete in 12 events for BDBR, beginning at Auto Club Speedway in March. Thus far, the NASCAR veteran has run in three races, finishing a season-high ninth in his last outing at Richmond International Raceway.

Mears, 39, has competed with some of the top owners in NASCAR — Rick Hendrick, Richard Childress, and Chip Ganassi. Now, with his Cup career sidelined he’s taking on a role of helping an XFINITY Series team grow.

“At first, it was just to get here,” Mears told Frontstretch regarding goals for the season. “We’ve only been together a couple weekends, and I’ve gotten to know these guys a little better. I don’t know what realistic goals are until we run more races and find out where we stand.”

The first two races for Mears didn’t go as planned, finishing 14th at Auto Club Speedway, but more notably a 38th-place finish at Texas Motor Speedway after having problems with the rear gear.

Forgive him a bit for encountering a learning curve. Prior to his race in Fontana, Mears hadn’t been in an XFINITY Series car since 2010 at Phoenix International Raceway, competing for Braun Racing. After being full-time in the Cup Series for the better part of six seasons, running with Germain Racing, there was an adjustment period to get back in the lower horsepower machine.

“It was about understanding how they are supposed to feel again,” Mears said. “I expected the car to turn a bit better from the Cup side, and here we have been pretty tight. I don’t know if that’s what we’re doing, this particular car, or if it’s the nature of the XFINITY car in general. I’m just trying to adjust to some of that and understand it better.

“The biggest adjustment was the power. I found myself at the bigger tracks feeding the throttle and you don’t have to do that here because there is less power. I’m working with little nuances like that. After that, it’s just a racecar and you’re just trying to find a balance and be faster than the next guy.”

Mears helped build Germain Racing before getting let go in November and replaced by Ty Dillon. In 2010, the beginning of his tenure with Bob Germain at Bristol Motor Speedway, the No. 13 car was a start-and-park machine, finishing 39th. It’s a trend that continued in 2011, start-and-parking eight times throughout the season before more sponsorship money shored up a full-time schedule.

By the end of his time at Germain Racing, Mears turned the program into a competitive organization, finishing as high as 23rd in points in 2015.

“When we first started doing the start-and-park stuff, I had never in my life heard someone come over the radio in the middle of the race sand say ‘oh, alright, come on in,'” Mears said. “I think I ran like an extra 10 laps because I couldn’t get myself to pull in. That type of stuff was difficult. It was rewarding to see that it built to what it is today and have a [hand in] getting it to that point. I enjoyed that part, but I can’t see myself wanting to do that again.”

For 14 years, Mears competed at NASCAR’s highest level. His best spurt of seasons were from 2004-06 with Chip Ganassi Racing. When he jumped over to Hendrick Motorsports in 2007, he won his first and only career Cup race at Charlotte Motor Speedway.

As the sport is beginning to cycle through drivers, seeing younger talent rise to the occasion, Mears would like to still compete in NASCAR’s top level. But there’s a realization he’s been in the sport a long time, and the best opportunities of his career have likely come and gone. There’s also an added benefit to cutting back for an athlete entering middle age. In his additional downtime thus far in 2017, Mears has taken a couple of family vacations, getting to spend more time with his wife and kids.

“I would love to be back [in Cup] one day, but it’s all going to be based on opportunity,” he said. “If I got a real good opportunity again with a top program. But the reality is there are a lot of young guys coming in, a lot of new stuff going on and there are people cycling out. If I can get back to something that is fun and enjoyable to go race, then absolutely. Outside of that, I don’t think I would have a whole lot of interest in it.”

The XFINITY Series has the next two weekends off before returning to competition Memorial Day weekend in Charlotte. Mears will pilot the No. 98 car once again at the site of his first career Cup Series victory 10 years ago. Can he make it two wins in a row for this small-time outfit?

Either way, Mears is content to be competing for a smaller race team. He doesn’t feel he has to prove anything to anybody going forward.

“I’ve been in this sport a  long time and I know I can run well, it’s just a matter of going and doing it,” he said. “In racing, you’ve always got to kind of prove yourself. You’re only as good as your last race. That’s how it always is. I don’t think from my standpoint I have to prove myself. I need to go out and get everything out of it every week and finish well every weekend. That’s the only way you’re going to build a program.”