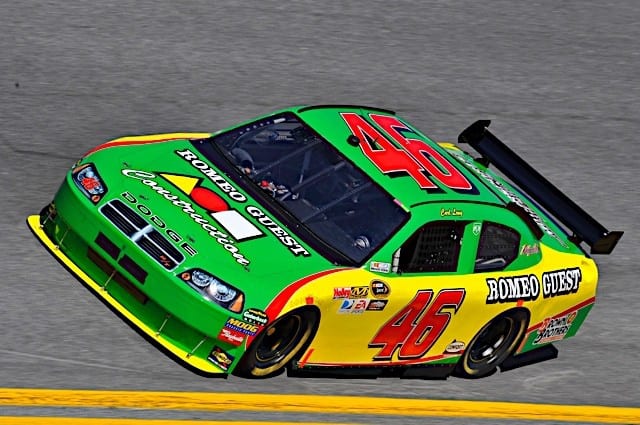 The last time a Carl Long-owned team ran a race in the Monster Energy NASCAR Cup Series was 2009.

Back then, Long, then 41, was on a part-time schedule in the series and in NASCAR as a whole, making intermittent starts in the XFINITY Series in addition to his Cup program. That year, he had attempted and failed to make the Daytona 500 at Daytona International Speedway with his No. 46, and then brought a car to the All-Star Race-preceding Sprint Showdown, as part-time teams of his caliber often did.

The rest is history and has been covered often: the No. 46, which finished last in the event after blowing an engine three laps in, was found to have an illegal engine that brought about a 12-race suspension for Long plus the loss of 200 driver and owner points and a whopping $200,000 fine. The engine was .17 cubic inches over the size deemed appropriate by NASCAR’s rulebook. Long was unable to pay the fine and was banned from the Cup Series garage until the matter had been sorted out, since running an XFINITY team for the past few seasons.

In that way, Long might have gone the way of Delma Cowart, himself a journeyman, DIY-type racer who attempted two races in 1997 — the Daytona 500 and, again, the pre-All-Star Race qualifier. Cowart was pulled off the track in the latter for not going through inspection before the race and promptly never returned to the series.

Except unlike Cowart, Long’s team, now called Motorsports Business Management, returns this weekend at Kansas Speedway with the No. 66 after the driver reportedly reached an agreement with NASCAR to allow him back in the Cup garage.

Had that 2009 Sprint Showdown been Long’s final appearance in a Cup race, it wouldn’t have been short of its share of stories aside from the obvious in Long’s illegal engine. In all, 35 cars started the race (with a 36th, to be driven by Boris Said, withdrawn after Said suffered second- and third-degree burns in a race in Long Beach, California), which was the largest field since 1996 when Jimmy Spencer won in a 36-car field.

It’s interesting to note the field size because Long’s 2017 return is such a throwback to the time when making a Cup race was not guaranteed, when more than 30 drivers might show up to try to make the All-Star Race without being locked into it. This weekend, Long’s team is assured a spot in the field as long as NASCAR deems the car able to start, and he would have been in a majority of the other races this season as well, save for just the two superspeedway races at Daytona and Talladega Superspeedway and then the April date at Texas Motor Speedway.

Not a decade removed from a 35-car Sprint Showdown entry list that went along with 18 more drivers who were already locked into the All-Star Race, now NASCAR’s premier series can’t even snag a full 40-car field on most weekends, and that’s even after the car limit was lowered to 40 from 43 beginning in 2016.

That’s not to call Long a field filler, a denotation that was bandied about in the early- to mid-2000s about drivers like Long, Kirk Shelmerdine and others who topped off the Cup field but either start-and-parked before the end of the race or ran with little prayer of even sniffing the lead lap, let alone a finish most major teams would find remotely acceptable. That practice has all but disappeared in the Cup Series these days, and given what Long and co. have been able to accomplish on the XFINITY side these last few years, there’s no indication they’ll change on the Cup stage. There may be growing pains, but Carl Long is and has always been a racer, and the No. 66 is sure to do just that every opportunity it gets.

But it is a bit of a blast from the past to see a team from 2009-era Cup back in the sport (though with different backers and owners this time around, like occasional driver Derek White). Shoot, a good chunk of the cars entered in the Sprint Showdown that year aren’t even around anymore, and haven’t been for some time.

Though there are exceptions. Richard Petty Motorsports’ No. 43, for instance, then driven by Reed Sorenson. Or even Joe Gibbs Racing’s No. 20, in the event since Joey Logano, a rookie, had not qualified his way in (he ended up garnering the fan vote to get into the big show). The Wood Brothers Racing team, then with Bill Elliott. A fledgling Germain Racing with Max Papis. Roush Fenway Racing’s No. 6 and David Ragan. The Front Row Motorsports cars. A few more, too, some with lineages that trace their way to existing Cup programs today.

And then there are the instances like Long’s No. 46. The aforementioned Shelmerdine was still trucking along with his self-owned No. 27, an effort that, too, disappeared after 2009. There’s Jeremy Mayfield’s No. 41, driven in the Showdown and in qualifying at Charlotte the next weekend by JJ Yeley following Mayfield’s positive test for methamphetamine; the team dissolved shortly thereafter. Norm Benning ran with his own team, a feat he hasn’t tried on the Cup level since 2010.

It goes on and on. You’ve got the Trevor Boys-owned No. 06 that showed up a few times in 2009 and never again. Derrike Cope and Larry Gunselman were still attempting Cup races with their own teams. The Barry Haefele-owned H&S Motorsports, driven here by Mike Garvey, ran 29th. Dexter Bean’s family was fielding the No. 51 here and there. TRG Motorsports was in its first of a three-season jaunt in the Cup Series with the No. 71.

That’s not even including some of the bigger-budget operations in the race that have since gone kaput, like the Michael Waltrip Racing operation, Yates Racing, extra teams for Team Penske and Richard Petty Motorsports.

All of which is to say that the NASCAR of then and now is in many ways vastly different. Sometimes there’s a tendency to group the Chase-era NASCAR together, even though, say, 2017 and 2009 have some extreme differences in car count, team makeup and even driver lineup. It may be better to look at current NASCAR as part of an era that begins with the implementation of the charter system, which has curtailed not only the starting field but also the amount of teams willing to show up for a one-off event. If you only have four open spots, and there’s a very good chance that whatever you make from the race purse-wise isn’t going to be a whole hell of a lot, why try outside of the major events like Daytona?

Kansas this weekend is, suddenly, an exception, thanks to someone who was just another face in a stacked crowd on May 16, 2009, at Charlotte Motor Speedway. Will it lead to something more? Doubtful. In fact, don’t be surprised if next weekend’s roster for All-Star Race festivities is a little anemic in comparison, kind of like last year’s 25-car Showdown field.

But in an era when teams seem to be cutting back or closing altogether rather than showing up for the first time, it’s nice to see an exception to the rule this weekend. A good throwback.