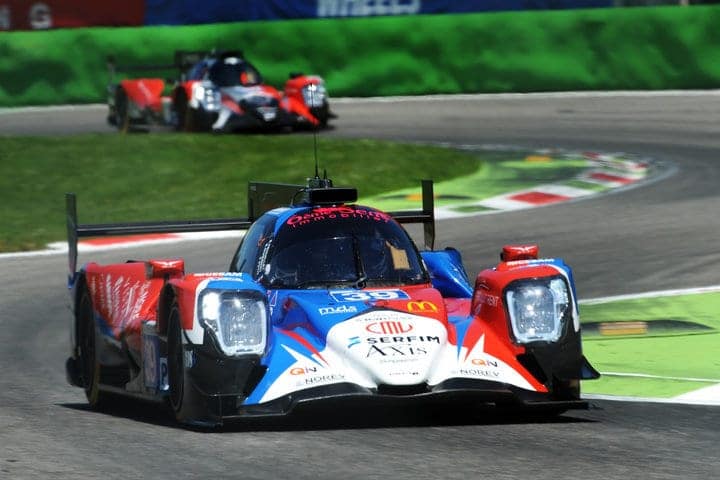 On Saturday, GRAFF Racing’s Enzo Guibbert won the pole for Sunday’s European Le Mans Series 4 Hours of Monza in his ORECA 07-Gibson.  Guibbert’s lap of 96.526 seconds (134.264 mph) around the 3.6-mile Autodromo Nazionale Monza was a little more than a tenth of a second faster than DragonSpeed’s Nicolas Lapierre in a similar ORECA 07.

Another tenth of a second further back was G-Drive Racing’s Ryo Hirakawa.  United Autosports’ No. 32 Ligier JS P217-Gibson of Filipe Albuquerque will start fourth overall while Algarve Pro Racing’s Antonio Pizzitola will start fifth.  Cetilar Villorba Corse’s Andrea Belicchi was the fastest Dallara in sixth.  The top seven cars in qualifying were within one second of the pole.

Ultimate’s Mathieu Lahaye qualified third in LMP3, followed by Silverstone winner Sean Rayhall in United Autosports’ No. 2.  Alexandre Cougnard in the No. 18 entry for M. Racing-YMR rounded out the top five.

Griffin’s lap was a quarter of a second faster than Fernando Rees in the secondhand Chevrolet Corvette C7.R from Larbre Competition.  Nicki Thiim in the Silverstone-winning TF Sport Aston Martin was third fastest.

The ELMS 4 Hours of Monza is scheduled for a 7:30 a.m. ET start on Sunday morning.  The whole race will be streamed live at europeanlemansseries.com.

Results of Qualifying for the ELMS 4 Hours of Monza