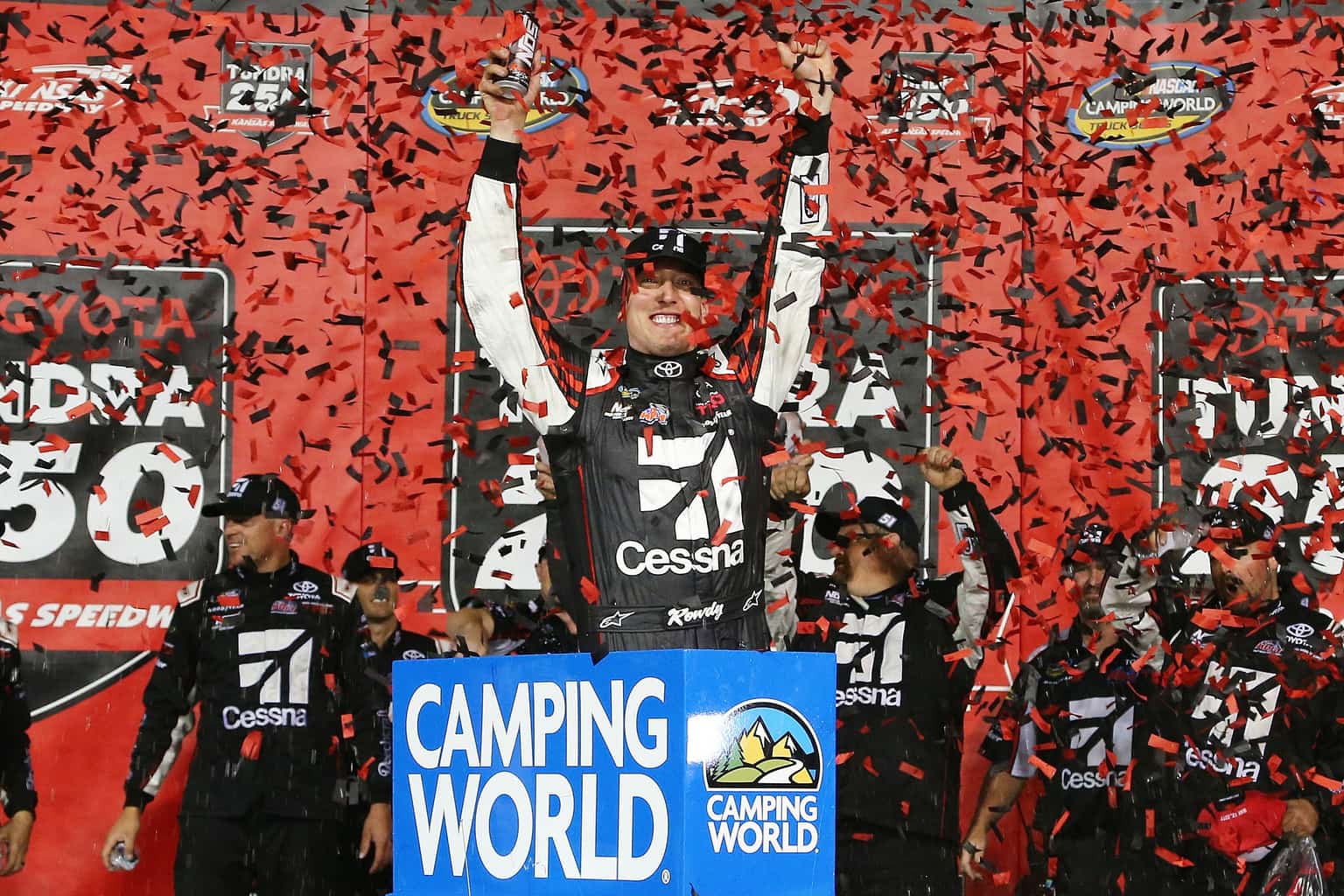 Rhodes’ expiring engine, giving up with eight laps left gift-wrapped Kyle Busch a much-needed NASCAR victory. Breezing by the wounded No. 27 Toyota, Busch scored his 47th career Camping World Truck Series win Friday night at Kansas Speedway. The driver of the No. 51 led 91 laps and pulled away from all competition after Rhodes cleared the way for Victory Lane.

Busch knew how lucky he was, refusing to do a burnout in deference to the dominant performance from a still-winless Rhodes. It was the second straight year the young driver came so close at Kansas only to fall short; last year, he spun out while battling side-by-side for the lead with Johnny Sauter.

“This was a great win for us, but really it’s a terrible loss for Ben Rhodes,” Busch said in Victory Lane. “He had this race won. I was trying everything I could to catch him and run him back down. I could gain a little bit on him and then I’d lose a little bit on him and just kind of went back and forth a little bit. He did a phenomenal job. It’s a tough one to lose that way, I know, because I’ve lost them that way as well.

“But for him to be racing against us and to be doing an awesome job, man, he raced me clean. He did a great job. He got by me. No issues there with lapped traffic and stuff like that. It’s cool to see young guys like that have great opportunities and to be fast and to make the most of it.”

Rhodes was despondent, needing hugs from his family and crew after the race and slamming his fist against the truck before composing himself. Winless in 31 career starts, the sophomore’s post-race interview was so heartbreaking it earned sympathy from some of NASCAR’s best.

Man, that's a heart breaker. @benrhodes run one of the best in the business down, passed him, and had that thing won.

“I think we should have been fifth, honestly. We had a fast truck like I thought we would,” Truex said about the new truck after the race. “We were good in traffic, really good on restarts. I made a mistake on pit road – I stalled the truck – and got us behind.

“There were just a few times I made mistakes, but it was a really good race. I kind of wish we would have had another restart there because I was so good the first two laps I could make a lot of track position. It wasn’t like last year where we lucked into a sixth; we deserved this one.”

The race was slowed by 11 cautions, five of which flew during the first stage alone. Wendell Chavous got the worst of it during that stretch. He managed to spin twice on his own in Turn 4, and the second incident did in the No. 49 Chevrolet. Chavous finished 31st after completing just 21 laps.

Leaving Kansas, Sauter saw his point lead shrink to just two over Bell. Matt Crafton remains third but dropped to 44 markers behind the leader after struggling with handling all night. Briscoe, who jumped three spots on the strength of a fifth-place finish, and Timothy Peters round out the top five.

The Truck Series heads to Charlotte Motor Speedway next Friday night for the NextEra Energy Resources 250.

How about winning a “real” race Kyle?