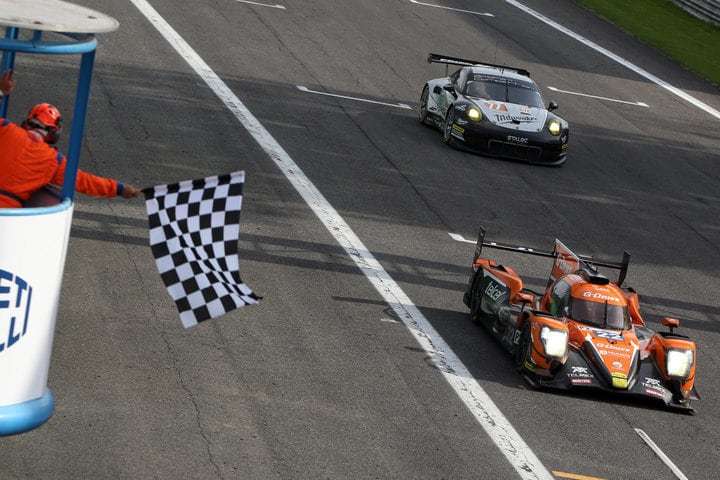 The margin of victory was a scant 2.245 seconds over the No. 21 DragonSpeed entry of Ben Hanley, Henrik Hedman, Nicolas Lapierre, but it really wasn’t that close.  Hirakawa had a 50 second lead with 18 minutes to go when he was forced to serve a drive-through penalty.  Earlier in the race, there was a Full Course Yellow due to an incident.  When that happens, competitors must slow to 80 kph and not exceed that speed.  Think of it as a modern equivalent to the Yellow Lights system that USAC used at the Indianapolis Motor Speedway until 1978.

The No. 22 was judged to have exceeded the speed limit.  Afterwards, Hirakawa was very confused about that.

“I can’t understand why I had a drive-through,” Hirakawa stated prior to the podium ceremony.  “I’m really happy to get the result, though.”

Hirakawa had every right to be confused.  The infraction apparently occurred during the second hour, while the penalty was assessed in the final 20 minutes.

In addition, teams were right up against the fuel window at the end of the race.  Hirakawa backed off substantially over the last couple of laps in order to guarantee the win.  For Algarve Pro Racing, driver Antonio Pizzitola didn’t back off enough.  Pizzitola’s No. 25 Ligier JS P217-Gibson came to a halt exiting Lesmo No. 2 on the final lap.  Pizzitola was running fifth at the time, but was not classified as a finisher as a result.

For the No. 21 DragonSpeed entry, they inherited second in the last couple of minutes.  Hanley was pressuring High Speed Racing’s Anders Fjordbach for second when the two encountered the GRAFF Racing No. 40 ORECA 07-Gibson.  Fjordbach was unable to turn into the Rettifilio and was forced straight through the styrofoam runoff chicane.  Upon rejoining the track, Fjordbach still had second, but was much slower than Hanley.  Hanley was easily able to take second at the Variante Della Roggia.

The pole sitting GRAFF Racing No. 39 of Enzo Guibbert, Paul Petit and Eric Trouillet was fourth, while the No. 47 Cetilar Villorba Corse Dallara of Andrea Belicchi, Roberto Lacorte and Giorgio Sernagiotto finished fifth.  Seven cars finished on the lead lap, aided substantially by Hirakawa backing off in the final laps.

In LMP3, it was a 1-2 for M. Racing – YMR.  The No. 19 of Ricky Capo and Erwin Creed claimed class victory by a full lap.  It is the first-ever victory for the new Norma M30.  M. Racing – YMR’s No. 18 Ligier of Alexandre Cougnard, Antoine Jung and Romano Ricci was not really a lap down to their team car, but ended up as such due to the placement of the overall winner.

Much like in Silverstone, United Autosports’ Ligiers dominated the class earlier on.  Wayne Owen led from the pole in the No. 3 and Sean Rayhall led briefly in the No. 2.

However, Rayhall came together with AT Racing’s Alexander Talkanitsa Jr. in Lesmo No. 1.  The resulting incident saw Talkanitsa end up in the trap while Rayhall spun, then had to avoid the Larbre Competition Chevrolet Corvette spinning out when he tried to rejoin.  Rayhall was judged to be responsible for the incident and was given a penalty.

Behind the two M. Racing – YMR entries was the No. 17 Ultimate Ligier for François Heriau and the Lahaye brothers (Mathieu and Jean-Baptiste), 26 seconds out of second.  United Autosports’ No. 3 for Christian England, Mark Patterson and Boyd ended up fourth, while the No. 11 Eurointernational Ligier for Giorgio Mondini and Davide Uboldi.

In GTE, the battle was between the Ferrari 488 GTE No. 55 from Spirit of Race and the No. 77 Proton Competition Porsche 911.  However, the Ferrari suffered a blown engine in the second hour.  That allowed the No. 66 JMW Motorsport Ferrari F458 Italia to come to the front.  For JMW Motorsport, Sunday was the final race for their Ferrari.  The reasoning given on Twitter was a bit of a joke, though.

The only reason she is being retired is because there is no more room for scrutineering stickers.

In reality, 2017 is actually the seventh season for JMW Motorsport’s 458.  A partial picture history for the car can be found here.  By any standards, that is a long run for a race car.  For Le Mans, the team will debut a 2016-spec Ferrari 488 GTE.

For the rest of the race, JMW Motorsport’s primary competition were the Aston Martins from Beechdean AMR and TF Sport.  However, the trio of Jonny Cocker, Jody Fannin and Robert Smith held on to win by just under eight seconds.

The No. 90 TF Sport Aston Martin of Euan Hankey, Nicki Thiim and Salih Yoluc was second, followed by the Beechdean AMR entry of Ross Gunn, Andrew Howard and Darren Turner.

For the ELMS, the series is now off until late July, when the series takes on the Red Bull Ring in Austria.  However, all of the LMP2 teams with the exception of High Speed Racing will compete next month in the 24 Hours of Le Mans at the Circuit de la Sarthe in France.

Unofficial Results of the ELMS 4 Hours of Monza

Disappointed that the Aston wasn’t able to take the GTE win, but they still put up a good effort.
And I imagine that the Ferrari of JMW will continue to race as soon as it qualifies for the vintage circuit.