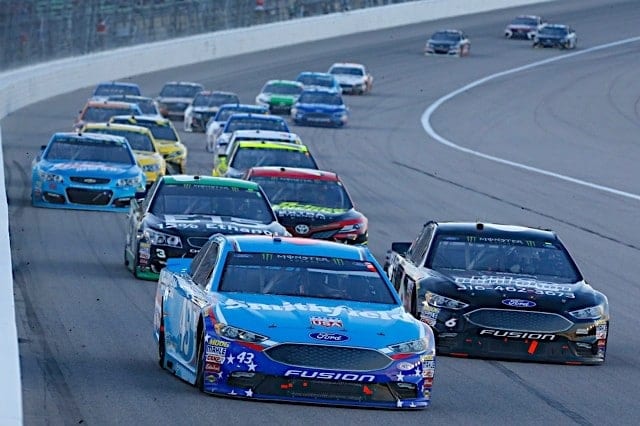 It’s something no one in NASCAR – fans, drivers or media – ever want to think about.

But in Saturday night’s Go Bowling 400, we were all given the harsh reminder that the sport is inherently dangerous.

Right before the 200-lap mark, Joey Logano suffered a brake rotor failure that snapped his No. 22 Ford into Danica Patrick, who was turned almost head-on into the outside wall. With nowhere to go, sliding in fluid on the track, Aric Almirola piled into the pair of wrecked cars, creating a fireball and making his car go airborne.

After the No. 43 came to a rest, all three drivers had their window nets down, and it appeared to be just another wreck that looked worse than it really was. Then reality set in.

Both Logano and Patrick exited their cars under their own power.

When it came to Almirola though, a nearly 30-minute red flag was required so safety workers could cut open and peel back the roof of the car to remove him. He was placed on a back board with a neck brace, both of which made perfect sense given the impact and the chatter through the teams that he was complaining of back pain. The grimace on his face told the story more than anyone else ever could.

The mood around the infield care center was somber and concerned, and you could have heard a pin drop through the stands at the speedway until he was finally extricated and cleanup began. Finally, after what seemed like forever, safety officials secured Almirola to a stretcher and carted him off to the infield care center, where he was evaluated briefly prior to being airlifted to a local hospital.

It was more than two hours later that any updates were available, and the update from Richard Petty Motorsports was that he had been transported but was awake and alert. No further details were available until Sunday morning, when the team released a statement saying he was mobile but had a compression fracture to his T5 vertebra and would be evaluated by doctors in Charlotte after flying home.

And the rest of the NASCAR world breathed a collective sigh of relief.

The specific wording in the team release that Almirola was mobile eased fears of paralysis, and that he was able to board a plane and fly back to Charlotte was encouraging since he wouldn’t be allowed to travel in the injuries weren’t too severe.

That’s not to say he doesn’t have a long road to recovery ahead. In fact, both Denny Hamlin and Tony Stewart spent multiple weeks sidelined in the recent past due to back injuries. And compression fractures can be difficult to treat, especially since most non-surgical options include

Despite the optimism in seeing Almirola able to travel home, the wreck was also a harsh reminder that NASCAR is a dangerous sport.

It’s undoubtedly much safer than it was even 10 years ago. Between innovations to the cars, the equipment drivers and crew members are required to wear and even the expansion of SAFER barriers at nearly every track on the surface, the sport has made many changes and adjustments to increase safety to the point where it’s easy to almost get complacent and not think about what could happen in the wrong circumstance on track.

But it’s never going to be fool proof.

“One of these times someone is not going to be OK,” Patrick said outside the care center after being evaluated and released. “Aric (Almirola) is not OK and his car looked the best of everybody. You never know when it is going to be the wrong hit.”

Though Patrick has been widely criticized for showing her intense frustration at scoring another DNF this season, she’s 100 percent correct that one of these times, something will change. In fact, it already did at Kansas on Saturday night.

It’s not the first time the mile-and-a-half track has seen some incredible wrecks. Kyle Busch and Joey Logano hit a ton in 2013, destroying both cars, but each drivers was fine, albeit sore and a bit shaken. The same happened when David Gilliland and Justin Allgaier slammed together in 2014. Again, both drivers were fine and walked out of the care center after being evaluated and released.

Thankfully, it’s been quite a long time since the sport has seen a fatality or even a driver permanently sidelined due to injuries, though several have had to take extended breaks to heal from various problems. But the fact of the matter is that every time the field straps in, there’s always that chance that something life-changing will happen, whether it’s a severe injury… or worse.

Prayers to Aric and his entire family and friends and I hope he has a full recovery quickly. After Danica’s self centered “Why Me” rant; I hope she is completely sponserless for next year and is out of a ride. She had to know Aric was hurt badly after coming out of the infield care center but her only concern was cry about her poor performances and how she can’t catch a break. It just proves how much of a B***h she really is.

Yeah, that solidified what most of us already knew about her and her true colors!! It sure as hell seemed to have awoke some to her nasty, disgusting personality. She is getting a lot of push back, and rightfully so. I pray she is not in a car next year….