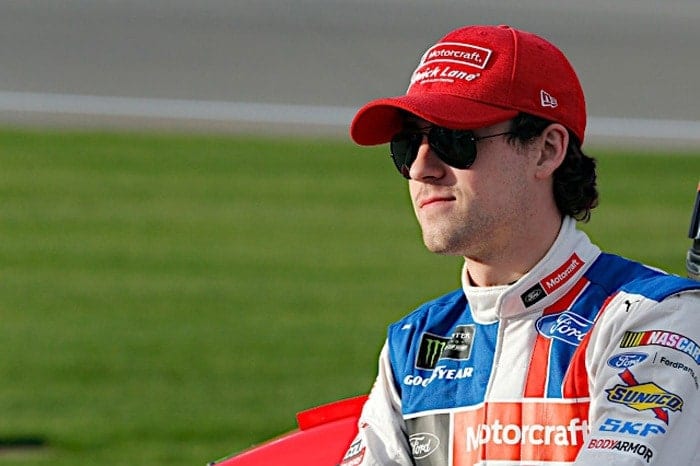 Ryan Blaney finally got a chance to race for his first career win on Saturday night at Kansas Speedway… and he almost got it too.

After running inside the top five in both practice sessions on Friday, Blaney put the rest of the field on notice that he had speed in his No. 21 Ford when he scored his first career pole.

Fast forward to Saturday night and Blaney entered with high hopes for a strong run. He led the first nine laps before relinquishing the top spot to eventual winner Martin Truex Jr. By the time the checkered flag flew, the 23-year-old eight times for a total of 83 laps en route to a fourth-place finish.

“It happens I guess. We weren’t very good on the long run. I felt that we had a great short run car tonight and I thought that was going to play right into our hands at the end. The 78 got us on that restart somehow. I don’t know. I was super loose there on the last restarts and the 78 got me spinning my tires a little bit. It kind of stinks. I think that it says a lot about this team to go out and lead some laps and go have a shot and win races.”

Blaney put an end to three consecutive finishes outside the top 30 with his fourth-place run. For the first seven races this season, he finished outside the top 20 just twice, but that was followed by a 33rd at Bristol, 36th at Richmond and a 39th at Talladega.

“It’s really just nice to be back on track to be honest with you,” Blaney explained during his post-race availability. “The last three races have been really, really bad, and it’s just an extra kind of slap to the face that we’ve had really fast cars in all those races we had troubles in, and we shouldn’t have finished 35th. We should have had top 10s in all of them.

“It was nice to show our muscle this weekend and prove that, like I said, this is where the 21 team deserves to be, so it’s just nice to get back on track. Of course we wanted to win, but at the same time, you look at the gains we made all weekend and really being fast all weekend, that puts us back to where we need to be for sure.”

His second top-five finish of the season helped moved Blaney up to 11th in points ahead of the All-Star Race next weekend.