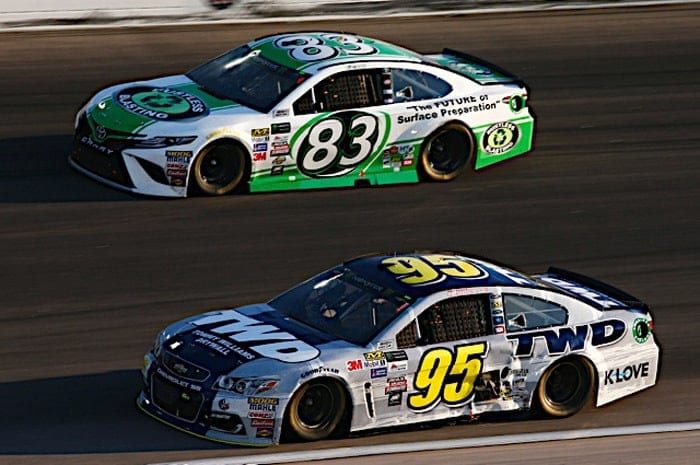 Race fans don’t always agree on things like favorite drivers or the state of the sport, but they do, and always have, shown remarkable solidarity in the face of a bad situation.  There’s nothing more eerie than a silent racetrack, and it almost always signals that something really bad has happened.  When the only sound is the Hurst tool used to cut a driver out of the car and the stands go terribly, ominously quiet, it’s scary…but it also shows the racing community at its best.

The three-car crash that ended with Aric Almirola being cut form his car and airlifted to a hospital was a reminder that racing is never a sure thing.  It’s become much safer over the years, but it will never be foolproof.  Maybe on some level, that’s part of the reason it ignites such passion and excitement. Those long minutes waiting for Almirola to be extricated from his car and then the hours of waiting for more word are something that every race fan dreads.  In that moment, it doesn’t matter who the driver is or whether he’s popular or a popular villain. Fans are at their best when the sport is in its darkest hours, and that’s when they need to be.

While it was good to see Carl Long finally make it back to the Cup Series after an absence of several years following a penalty with a very high fine that Long, as an independent owner, could not pay, I don’t agree with the assessment that NASCAR was unfair.  The sanctioning body has always taken a hard line with engines, and while it’s true that Long’s engine that was found illegal was very old (and wear likely contributed to the problem) and underpowered, NASCAR enforced the rule in the same manner they would have with any team.

If it had been a team like Hendrick Motorsports or Joe Gibbs Racing with an engine failing technical inspection, the cries for a massive penalty would be deafening.  At the end of the day, NASCAR can’t have different penalties for teams based on the teams’ income level.

While the argument that the race was a non-points event holds a little more water, it’s still hard to say that anything goes, because there was a lot of money on the line as well as integrity.  IF NASCAR were to let one team slide on the rules, they’d have to let them all slide, so all in all, the call was the right one, it’s just sad that it was a team that couldn’t afford it better.

Top of the Class: Kansas I

After three straight weeks of finishing in the back five, Ryan Blaney found his mojo, wining the second stage and leading 83 laps en route to a fourth-place finish.  It looked as though Blaney might take home his first Cup win Saturday, but a couple of late cautions set up restarts where Blaney just couldn’t take advantage despite great track position. Blaney left Kansas disappointed, but overall, the race was a much-needed rebound for the Wood Brothers team.

Starting at the back of the field after an engine change can be quite a handicap.  So can being spun on pit road and losing valuable time and track position in the pits.  Michael McDowell and the No. 95 Leavine Family Racing team had to overcome both of those obstacles on Saturday, bouncing back to finish 13th.  Jimmie Johnson got a lot of airtime for climbing through the field twice, but Johnson wasn’t the only one to make that climb more than once.
Ty Dillon also had a strong finish Saturday night, taking 14th place, but a run-in with fellow rookie Erik Jones sent Jones spinning late in the race.  Jones had had a dismal night already when contact from Dillon resulted in his third spin.  Dillon’s probably not on Jones’ Christmas card list at the moment, but he suffered no damage in the incident and went on for a top-15 finish.

Also scoring top-20 finishes in Kansas were David Ragan and Chris Buescher, who finished 17th and 18th Saturday night.  Intermediate tracks can be especially difficult for the smaller teams with the emphasis on aerodynamics.  These teams rarely get wind tunnel time and don’t have much if any manufacturer backing, so a top 20 is a very good showing at a 1.5-miler.

Landon Cassill had a couple of brushes with the wall thanks to some tire problems, but he bounced back to finish 21st to complete a strong showing for Front Row Motorsports.  The team has definitely shown promise at times.

Reed Sorenson had a very good day for Premium Motorsports, finishing on the lead lap in 25th.  Sure, he got a couple of free passes to help with that effort, but he had to be in position to capitalize, so no shame there.  Sorenson hasn’t set the world on fire, but he has been a steady presence for his team this season.

Also with top-30 efforts this week were Cole Whitt with yet another surprisingly solid day in 26th, Corey Lajoie in 27th despite a couple of on-track incidents, Timmy Hill with a 28th-place run and AJ Allmendinger in 30th.

Also give Carl Long a passing grade for making the long trek back to the Cup Series with his self-owned team. He finished 31st and went for a spin, but give him credit for perseverance.

Matt DiBenedetto had one of his more disappointing runs this year in 32nd.  He had to start in the rear due to a pre-race tire change, but what really derailed his run was a mechanical failure that cost the team several laps.  DiBenedetto has had some much better runs this season, so there’s no reason to think it’s anything more than a bad day at the track.

On the other hand, ten races into the season, it’s hard to argue that some teams aren’t showing much growth.  Jeffrey Earnhardt and Circle Sport (33rd), Gray Gaulding and BK Racing (really as a whole) and Premium Motorsports’ Derrike Cope (39th; engine failure) haven’t shown that there’s a lot of room for improvement.

Aric Almirola suffered a frature of his fifth thoracic vertebra (T5) in a three-car crash Saturday night at Kansas.  Richard Petty Motorsports has not yet said how many races Almirola will likely miss, but Denny Hamlin was out for four weeks with a lumbar fracture in 2013 and Tony Stewart missed eight races last year for a back fracture.  As of this writing, no replacement driver has been named.  Possibilities include Greg Biffle, who drove a Ford in the Cup Series last season, and Casey Mears, who shares an Xfinity Series ride with Amiola for Biagi-DenBeste Racing, which has ties to RPM, but there are several drivers who could fill in.  NASCAR has taken the No. 43 car to its R&D center for further investigation.

NASCAR announced Monday that there will be four stages in the Coca-Cola 600.  That could actually play into the hands of a smaller team willing to gamble for bragging rights as tams will play different strategies in the four 100-lap stages of the race.

The All-Star Race will feature three opportunities to race into the main event on Saturday. Currently, the small team contingent is represented in the All-Star Race by Chris Buescher, who won at Pocono last August.

And the Understatement of the Race Award goes to…

Got caught in that one. #nascar

On the other hand, simple and right to the point…

A summary of how we all felt Saturday night:

Thinking of @aric_almirola tonight. Hope his back is ok.

How all teams want their nights to end up:

All smiles over at the No. 95 TWD @TeamChevy. #NASCAR #GB400 pic.twitter.com/tjoCps1Ydj

.@AJDinger absolutely roasted @LandonCassill before the #NASCAR race, because that's what friends do. ?