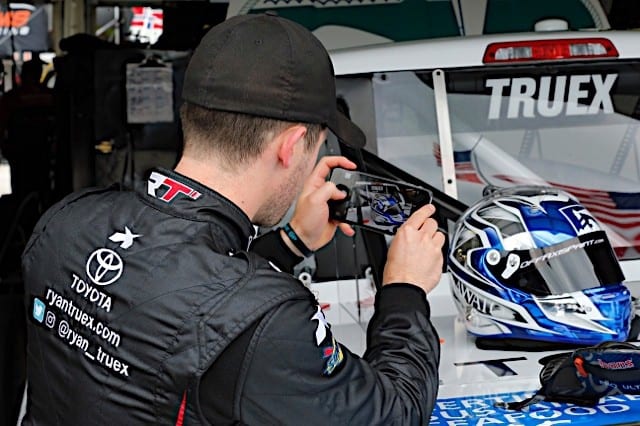 So far, it’s going pretty well. His No. 16 Toyota is hot off a sixth-place finish last weekend at Kansas Speedway, his second top-10 result in the opening four rounds in the series.

Frontstretch sat down with Truex to see how the year is going. Among the topics: his level of appreciation for this opportunity, how other youngsters can follow in his footsteps, and why the Truck Series needs experienced talent in a time of hot up-and-comers.

Zach Catanzareti, Frontstretch.com: What was the offseason like for you sealing up this deal with Hattori?

Ryan Truex: It came together a little late. Around January. So, the November-December area, I wasn’t really sure what I had in store for this year. It’s been that way for the past few years; I’ve been floating around a little bit. I’ve never gone into the offseason really knowing what I was doing the next year.

So, to be able to come back with the same team — it’s essentially a new team as far as the new shop, new crew chief. A lot of the guys have changed but we were able to end the year with a few of the mechanics, we were able to bring in my crew chief from the K&N days (Scott Zipadelli) who is a close family friend we’ve known for a long time. Everywhere he has been they have won championships. We felt like he was a really good addition.

We just revamped everything basically; building new trucks, re-tooling the ones we had. It’s a tough start to the new year because we got started late. As I said, we didn’t have everything done until January. So, it kind of showed more at Atlanta than Daytona, where we were a little off. Having the break [after Martinsville] has given us time to catch up.

Catanzareti: You ran most of the season last year but before that, you didn’t have much time in the trucks. How much did last year prep you for this full-time year?

Truex: I think a lot. The biggest thing was that I learned how these guys race and how important it is to stay out of trouble and stay in front of them. These races are short so you can’t make mistakes because it’s hard to come back from them. You have to be flawless on restarts and on pit road. Basically, keep all the mistakes to a minimum.

Catanzareti: Last year started with a great run but a heartbreak at Daytona. What would be different if you won that race?

Catanzareti: Would you have gone full-time to make the playoffs?

Truex: I think we would have, yeah. It would’ve been hard not to having that in our back pocket. Even when we had to start missing races, we were still top eight in points. And I think we were ahead of [Daniel] Hemric, who ended up making it in on points. I think we would have been right there. I think the biggest thing is that it gives us confidence heading into this year. Now that we know we’re full-time and we don’t have to worry about that week-to-week deal, we can really focus on building and preparing for the playoffs like we know we’re going to be in it.

Now, with the stages and the playoff points, it’s even more important to run well every weekend and to run well throughout the race. There were times last year where we were far off starting the race and we would end well. This year, that won’t pay off, you won’t be able to make the playoffs running like that.

We have to make sure we keep doing our prep work. If you’re not getting better, you’re getting worse, especially in the Truck Series because these big teams are constantly innovating, so you have to be striving to be better. I think all of our team, from the crew chief to the tire guys, mechanics, everyone has that same mentality.

Catanzareti: Go back to your K&N championships for a bit, back-to-back championships. You had seven straight top-three finishes at one point. How did you handle yourself? A lot of kids, it can affect them the wrong way. How was it for you?

Truex: I think I had the right people around me. Obviously, my brother helps a lot. To see all the success he had and all the struggle he went through to get back to the top, things like that have grounded me. Coming from a family who came up from racing, I’ve been around it my whole life. I’ve always been able to bank off that to keep myself in check.

Especially in the last few years when I moved up from K&N, bounced around between teams. I’ve been close to winning races and close to running full-time and had deals fall through. All this stuff humbles you and makes you more appreciative when you do finally get a full-time ride like I do this year. It makes you really want to take advantage of it.

Catanzareti: You think some kids lack that?

Truex: There’s a lot of different mentalities throughout the field. That’s the best way to put it. There are people who you know you want to race with and there are people you know you don’t. You have that at the back of your mind all the time. Aside from that, I don’t know. I’m not very close with most of the guys, I keep to myself and really just focus on staying away from them on the track… staying in front of them.

Catanzareti: People like you, Parker Kligerman, you’ve been drivers who struggled to make it. Why does the Truck Series need drivers like you?

Truex: We are always looking for the next big thing, the next young, big driver. The next superstar. But there are plenty of them here already who just haven’t gotten their shot. Brett Moffitt is a good example. For the past few years, he’s been in the same boat as me, bouncing around a lot. Running for different teams, part-time, and he finally got a good ride for a good team last year and was able to win. Now, he’s full-time, which he deserves to be.

Myself and Parker last year, both with underfunded teams, we don’t have the greatest equipment in the garage, and we were both able to put together strong runs to prove ourselves. The biggest thing is… you’re only as good as your last race it feels like in NASCAR. People forget quick. So, you’re constantly proving yourself and constantly striving to be better.

You can never sit back and say, ‘Ah well, I’ve won all these races.’ Parker can’t say he’s won 10 ARCA races, I can’t say I’m a K&N champion. It doesn’t matter. It’s ‘what have you done lately?’ That is the question that will come up.

Catanzareti: How different is it racing in the Truck Series compared to Cup? The drivers are a lot less experienced, of course.

Truex: Well, that’s the biggest thing, experience. You see it at Martinsville a lot, guys sometimes drive over their heads a little bit. Sometimes, they’re a little too aggressive. When there is nowhere to go, sometimes you get caught up in someone else’s mess. I think that’s the biggest thing I’ve seen in the Truck Series, there is a lack of respect for the equipment more than anything. That translates into a lot of wrecked trucks.

Catanzareti: You, Brett, Parker, you all have that Cup experience. When you look back on that time, was it more fun or stressful? You were with a small team and you struggled.

Truex: It is never fun to run poorly. It was great to be a Cup driver and it was great to get that experience, but it was frustrating. When you come up through the ranks and you win a lot of races, you think, ‘Ah man, I’m great’ … I think it really humbles you. But at the same time, it’s really frustrating.

But you learn a lot. I lean on that experience all the time. You can’t replace the experience you get racing against Kyle Busch and Jimmie Johnson and Jeff Gordon. There are so many little things you can pick up — even when they’re lapping you, there’s still stuff you can see out there that you can’t see from the grandstands, on TV or in-car footage. Yeah, it was frustrating, but at the same time I’m glad I got that experience. I wish it could’ve gone better. Obviously, I wish I was still in Cup. But now, I feel like I’m in a spot where I can win races. I just have to prove again why I belong there.

Catanzareti: Your brother Martin has been in Cup for a long time. How did your appreciation change when you were in Cup? You saw how difficult it was. When you look at what he has done, what are the feelings like?

Truex: Well, it shows how hard it is. He came up through the ranks, when he got to DEI he won his second year out and everything started to crumble around him. And it was a struggle to get back to the top. That makes you appreciate it a lot more and it shows how hard you have to work.

Like I said, it’s just that never-give-up mentality. You always have to strive to be better and he always does.