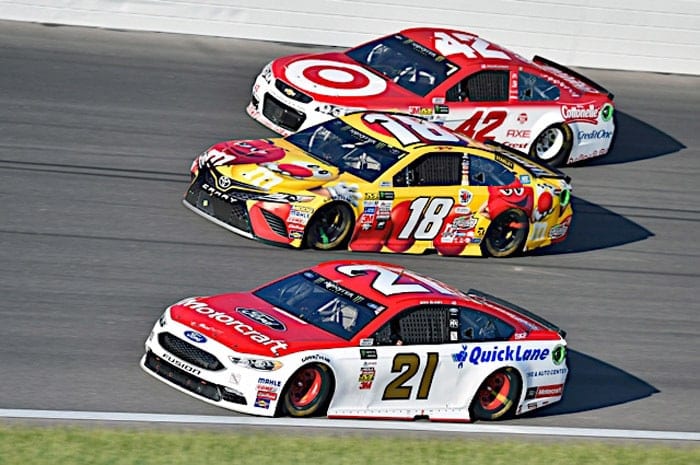 1. Kudos to the AMR medical team that extricated Almirola.

First and foremost, I want to send well wishes to Aric Almirola for a speedy recovery. A T5 compression fracture is no joke, and he’ll need some time to get better, even if it’s revealed through follow-up doctor visits there is no further damage to his back.

With that said, we should all stand up and recognize the AMR medical team that extricated him from the No. 43 Ford Saturday night. When his car came to a rest and he immediately dropped the window net, no one imagined Almirola was severely injured. But then reality set in as a nearly half-hour red flag was required to get him out. That gave safety workers time to cut back the roof and get him set up on a backboard before transporting him to the infield care center.

What struck me the most while re-watching on the DVR when I got home was how methodical the extrication was. You could see a sense of urgency in their moves. However, there was never a point when anyone looked chaotic or like they weren’t sure what to do next. Every person present around the No. 43 car appeared to have a role and executed it beautifully.

We still don’t know the full extent of Almirola’s injuries or just how long he may be out of the race car. But you can rest assured the safety crews responsible for removing him didn’t compound the problems he’ll face in the coming weeks.

Friday afternoon’s qualifying inspection presented yet another large group of cars sitting on the sidelines. They failed to make it through the LIS inspection station prior to qualifying. Their punishment? Starting in the rear of the field.

The first visit to a mile-and-a-half track since nine drivers didn’t make it through at Texas Motor Speedway last month highlighted the very real problem NASCAR is facing with these failures. There are no winners when drivers don’t get to qualify. Certainly, it’s a black eye to the sport when you have a quarter of the field sitting in the garage instead of out on track. Fans also get cheated from seeing their favorite drivers out there trying to score the pole.

But the real problem lies with teams. After all, NASCAR has specific rules in place for proper specifications. There’s even a tolerance amount given within reason. Yet you have cars that still can’t make the proper measurements and push the envelope a little too far.

Many have pointed the finger at the sanctioning body and its equipment. They claim that if so many cars aren’t making it through, it has to be a problem on NASCAR’s end. But the fact of the matter is teams have always pushed the envelope as far as they possibly can. Clearly, 11 of those teams pushed it too far in Kansas otherwise how did the other 28 get out on track?

What NASCAR really needs to do is revisit procedures when it comes to how it handles failures ahead of qualifying. Sure, losing practice time or pit selection can hurt. But starting in the back of the field is usually countered by sticker tires those who don’t qualify get to start the race on.

Instead, maybe what the sanctioning body needs to do is to issue a penalty that hits crew chiefs where it hurts. I don’t claim to have the perfect answer, but I’d imagine docking points would get them to pay attention. Or perhaps taking away a set of tires for the race?

The bottom line is that something needs to be done to deter teams from pushing their cars so close to the edge of the tolerance line each week. Having 25 percent of the field in the garage instead of on track for qualifying is unacceptable.

Blaney nearly snagged his first career win Saturday night; he may have had a better shot if his car wasn’t so loose in the closing laps. After running top five in both practice sessions Friday, Blaney put his No. 21 Ford on the pole for Saturday night’s Go Bowling 400. He then led eight times for 83 laps at Kansas en route to a fourth-place finish.

“The last three races have been really, really bad, and it’s just an extra kind of slap to the face that we’ve had really fast cars in all those races we had troubles in, and we shouldn’t have finished 35th,” Blaney said during his post-race media availability. “It was nice to show our muscle this weekend and prove that, like I said, this is where the No. 21 team deserves to be, so it’s just nice to get back on track.

“Yeah, of course we wanted to win. But at the same time, you look at the gains we made all weekend and really being fast all weekend, that puts us back to where we need to be for sure.”

The good news for Blaney is he was finally able to show what the team’s been capable of. After three straight finishes outside the top 30, it’s got to be gratifying for him and the entire Wood Brothers organization to know that they’re able to run with the best of the best, rather than trailing behind.

I figure it’s only a matter of time before Blaney gets that first career win monkey off his back. When he does… watch out!

By now, everyone has seen or heard Patrick’s post-wreck interview outside the infield care center following Almirola’s horrific crash. Many have come out criticizing the driver of the No. 10 Ford for her reactions. People think she should have mentioned Almirola a lot sooner and shouldn’t have been so focused on her poor luck.

But she shouldn’t be facing this much of a pushback. It’s likely Patrick had already been told that Almirola had immediately dropped his window net. That’s the signal to mean he was awake and alert, communicating with safety workers extricating him from the car.

For just a moment, put yourself in her shoes. Patrick had just crashed, nearly head-on into the wall at over 200 mph, causing her car to burst into flames. I don’t know about you, but I imagine that alone is enough to get the adrenaline pumping at a pretty high rate, something that’s going to take more than a few minutes in the care center to come back down.

Add that to the way her season has gone thus far and you can see where the frustration comes in. After all, the DNF marks her fifth of the season and the fourth from a crash, all but one of which (Bristol) weren’t her fault.

Also consider this race in particular, one where Patrick was likely on her way to her first top 10 since Bristol in early 2015. She has exactly two top-20 finishes all year and sits a dismal 33rd in points. In fact, there was a point during Patrick’s interview where it seemed like she wanted to just throw her hands up in the air and walk away from the sport, a move which would likely make many fans quite happy.

Was there a better time for expressing that frustration? Given the ongoing situation at the track, absolutely. But I guarantee if you put those same words into a different driver’s mouth, there wouldn’t be nearly the backlash Patrick has seen.

Lacking speed to make it to the final round of qualifying Friday, Keselowski started 17th but wasted little time moving inside the top 10. It was clear the car had speed.

Sadly, Lady Luck had other ideas. After getting caught midpack through varying pit strategies, the driver of the No. 2 Ford suffered a loose wheel that forced him down pit road for an unscheduled pit stop. To add insult to injury, Keselowski was busted for driving through too many pit stalls. That caused a pass-through penalty – also under green – which put him two laps back.

While many counted him out, Keselowski kept his head down and worked hard, taking two wave-arounds to rejoin the lead lap. He then wheeled his way to second and may have had a shot at the win with more time. But, when all was said and done, Keselowski still lost points to leader Kyle Larson in the championship standings.

“We finished second here two or three weeks, and last week we finished seventh and lost points all three weeks because of the stages,” Keselowski said after the race.  “You have to run up front.  You have to get through the early and middle part of the race without having issues or you lose points. So that’s one of the beauties of this format is you can’t just kind of buzzard‑pick at the end.

“We still lost points today, which is a bummer, considering that we finished second, and I think fifth or sixth in one of those stages.  That just shows how tough the competition is and how important the stages are.”

Keselowski’s second-place finish is the perfect example to show that stages implemented this season are incredibly important. While it used to work for a driver to lay back and come on strong at the end, the bottom line is you have to run well the whole day to truly get the most out of a solid finish.

Danica is like a fart in the wind, gone in a second of thought, or maybe never. She has been a forgotten PIA for some time, the only one with a hard on is DW!

You people just don’t get the what the hell transpired with her. SHE DID NOT CARE, SHE DOES NOT CARE. Her near insane rant was just bad, plain bad..I don’t understand how anybody can remotely defend that shocking behavior. Everything was just wrong about it, wrong. And this just shows her true personality, and it was notched up to 11 not 10 on Saturday night. She is the architect of this criticism, and it is deserved. Nobody is saying she needed a half hour talking about Aric but there would not have been the 5 seconds if Jamie Little did not mention it.

She has a history of being difficult, a PIA to work with, a whiner, a non team player, a princess. All stated by people who actually worked with her, not some sports writer praying access to her not be cut off if something bad is said. We fans see it as well. Saturday was just so damn shockingly bad, most everybody was shocked. I am sticking with the shocked people. No excuses for her maniacal, diva behavior.

Joey was in the same wreck. He handled it somewhat differently.

She got the ride because of the money she brought in. Now that it’s drying up the writing is on the wall. Money talks and a more deserving driver walks.