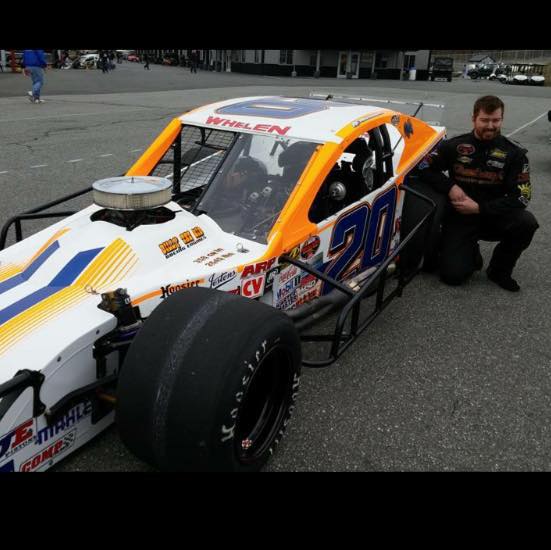 The NASCAR Whelen Modified Tour season is in full force. For Max Zachem, the regular grind of putting together his Troyer racecar gives him a chance to spend valuable time with his father, Ken Zachem.

This year is different for the Zachem family, though. After acquiring a new spec engine, the team is excelling. Through four races, the No. 20 car sits fifth in the standings, earning three top fives already, equating his total entering 2017

We spoke with Zachem, discussing his season, what it is like to be a part of a family-run organization, along with hopes of competing in the K&N Pro Series East and more.

Joseph Wolkin, Frontstretch.com: How would you evaluate your season thus far?

Max Zachem: It is a great way to start the year off and we need to continue to have momentum. I’m very fortunate to be in the position that I’m in. I believe we’re going to be a contender for the rest of the year, and hopefully, we can get a few wins.

Wolkin: Last year, you had a pair of runner-up finishes. You already have three top fives this year. What is the biggest difference?

Zachem: We upgraded our whole program, from the car to the engine with the new spec series engine from NASCAR, a new crew chief in Steve Lemay, who has been a huge influence. Basically, our whole program has stepped up to the next level. We also signed a new sponsor with Anytime Realty out of Rhode Island. There is a whole package of reasons. In order to compete in the NASCAR Whelen Modified Tour, you need to have the best of the best. I believe now that we have everything to be one of the best guys at the racetrack week-in and week-out.

Wolkin: What are some of the changes you’ve noticed with your new crew chief?

Zachem: He took a lot more pressure off me in the sense that he is so detail-oriented that I can focus more on driving the racecar than trying to do the set-ups and make changes. Your Doug Coby’s and Timmy Solomito’s have higher crew chiefs, which gives them the 110 percent they need to drive the racecar, and that’s all they have to focus on. I had to do a little more of that. But with Steve involved, I don’t need to concentrate on as much stuff anymore, and it takes the pressure off me and it’s showing on the racetrack.

Wolkin: Your dad is heavily involved in your program. What is it like to work with your father?

Zachem: There is nothing better. We’re not like father and son. We’re like older brother and younger brother. Like any father-son duo, there is nothing better. I couldn’t be happier to share the ownership role with my dad. We’ve made a lot of memories. We’ve been racing for a total of 17 years from quarter midgets to Legend cars to the Modifieds.

Wolkin: Since you’ve been racing for so long, how does racing bring you guys closer together?

Zachem: It’s all we do in the essence that we don’t go on vacations. We don’t do anything else but work and go racing. Even during the winter months, we’re going down to the indoor races at Boardwalk Hall [Atlantic City], Trenton and Allentown. It’s basically 24-7 that we’re either working or racing in one way or another. Me and my father just travel the country with racing.

Wolkin: What does it mean to both of you to finally begin to see success after so many years?

Zachem: It’s really humbling in the sense of you know you put the time and effort into. You just want situations to work out perfect, and now the results are starting to show the effort that is being put in. It gives you a sense of pride when you go to the racetrack. It makes you realize how the effort is put in, how hard you work to not have the results and to now have the results is really gratifying.

Wolkin: Now that your team is starting to become more successful, what are your goals for the rest of this year?

Zachem: I want to pop off wins and I want to be at Thompson as one of the championship contenders. The only way we’re going to have a successful season in my eyes is if we win at least one race and finish better than the top five in points. I believe we have the caliber, the crew and the team to do it. I really think if we do anything less than that, it’s going to be a disappointment for me, where many others wouldn’t think that way. I’m putting a lot of pressure on myself because I know we can do it. This year is our year.

Wolkin: What is the biggest challenge you’ve faced while trying to make a name for yourself?

Zachem: It’s harder for me in the sense that I was trying to learn and do everything at the same time. The caliber of drivers and teams you are competing against – you don’t realize how tough it is. My biggest example of that is the [No.] 2 car with Phil Moran, the crew chief, and his full-time job is taking care of that racecar.

I’m always 40 hours a week behind him with my normal job, getting the car ready and having the notebook and so on. We always had an uphill challenge going to races each week and trying to compete against the full-time teams. It gives you a sense of pride to be able to compete with them.

Wolkin: What is it that you do outside of racing?

Zachem: I paint and sandblast military helicopters. I’m a sub-contractor for the military. It’s a pretty cool gig.

Wolkin: What makes you want to continue racing in the NWMT?

Zachem: Being from New England, I grew up with the Modifieds and I believe they are the best cars in the country. People don’t realize how lucky we have it in New England with all the different racetracks and different series of Modifieds that we run. I believe they’re the coolest cars. They’re like a rocket ship with four wheels. It’s a lot like an IndyCar in that sense. I believe the Modifieds put on the best races on asphalt. We can go anywhere with our cars, and that’s what makes them truly special.

Wolkin: Some Modified drivers, like Ryan Preece, have tried to move up through the NASCAR rankings. Do you plan on following that path?

Zachem: If we had the right backing, I would have. The problem is that it’s such a marketing and money-driven sport that finding the value is just so hard. I had an opportunity about six or seven years ago where I could have moved up to the K&N Pro Series East for a team. I had a contract and everything, but it came down to three-quarters of a million dollars to go racing.

In my eyes, I rather go race a Modified for 10 years and continue my life up here rather than taking the risk of putting my family in debt three-quarters of a million dollars just so I can live out my dream. Economically, it didn’t make sense. I was a young man at the time and I could have begged and pleaded, but it didn’t make sense in my eyes.

Wolkin: Yeah and there are plenty of guys who have tried to move up and went bankrupt from spending their life savings.

Zachem: That’s exactly it. I’ve tried to get a few opportunities here and there. I’m trying to get one for Thompson when the K&N Series goes up there just to say I did it. The theory is I’m not getting any younger. I say that at 24 and everyone laughs at me, but it’s true. I believe this is my best opportunity to do it, and I want to give it a shot. Down the road – I know you know Teddy Christopher – I don’t want to be racing like him at that age. I’m trying to live all my opportunities out now. Nothing against Teddy! We’re good friend!