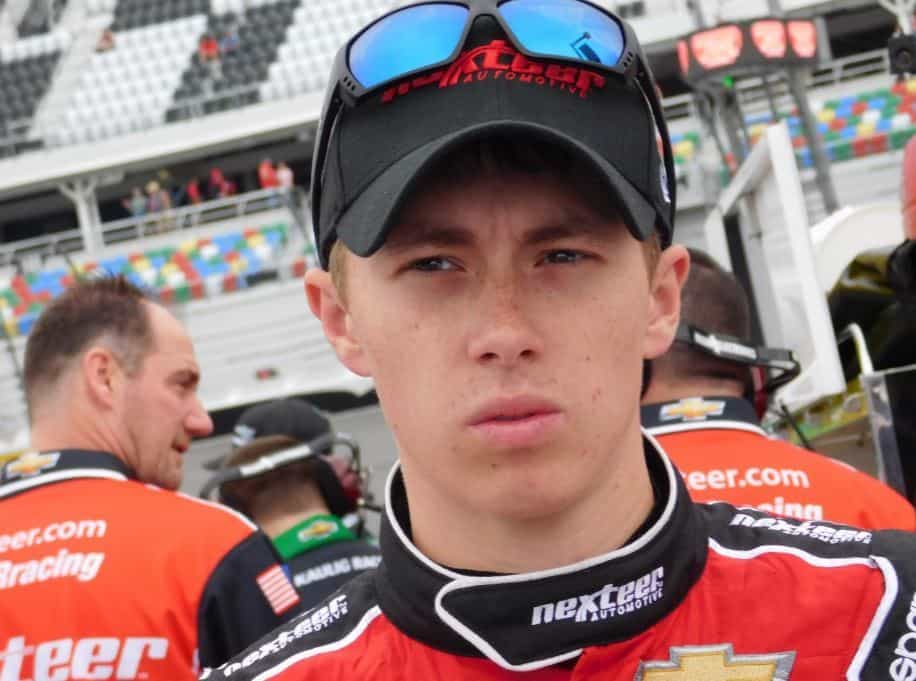 Brandon Jones kicked off his 2017, sophomore season with a bang, by winning the pole for the season-opening race at Daytona International Speedway, something that may have been a surprise to some.

Crashing out on Lap 28 in one of the race’s three vicious wrecks, Jones finished the race 29th. In the eight races since Daytona, it hasn’t got much better.

Heading into the second consecutive off week for the XFINITY Series, Jones sits 15th in the championship standings, 32 points behind the playoff cutoff, currently held down by Cole Custer.

The No. 33 team is still looking for its first top-10 finish, when at this point in his rookie season (2016), Jones had posted four top 10s and sat sixth in the standings.

“We’ve been running pretty decent, but we don’t have the finishes to show for it,” Jones told Frontstretch. “A couple of those guys are pretty adamant to get the stage points, and we haven’t picked up too many of those, and I think that’s hurting us a little bit. Sometimes, guys are getting top 10s every single stage and getting some points, may not finish well at the end, but they’ve got so many points throughout the race that it’s helped them out.”

Justin Allgaier leads the XFINITY Series with 75 stage points, including seven playoff points by winning at Phoenix International Raceway combined with a pair of stages at Richmond International Raceway and Talladega Superspeedway. Through nine races, Jones is averaging one stage point per race, accumulating nine additional points this season. The No. 33 team ranks 14th in terms of stage points with XFINITY Series regulars, and even Kyle Benjamin, who has made just one start sits ahead of the Richard Childress Racing team in terms of stage points.

However, Jones believes that having a case of the bad luck has a lot to do with the team’s performance thus far this season.

“I felt like last year, we started out with all the breaks we could possibly get,” Jones said. “Some guys would wreck out in front of us or something, and we would move up a couple spots at the end. At the very end of the year last year, I felt like we picked up a bit, and I think I got better as a driver. I think we’ve started up where we left off last year, we just haven’t gotten the finishes like we did last year to start off the year.”

However, RCR is the only XFINITY Series team to be running five full-time cars this season. Daniel Hemric and Brendan Gaughan join Jones as XFINITY Series regulars, currently sitting fifth and 17th in point’s, respectively. Ty Dillon is competing in 27 events in the No. 3 car, while Austin Dillon, Paul Menard and Ben Kennedy fill out the No. 2 machine.

JR Motorsports is the only other team to run five team cars in events this season, but it’s only a partial schedule.

“I don’t know if it has hurt us, but it’s definitely a lot,” Jones said of RCR having five teams. “You try to go back to the shop and we have our meetings and everything, and there is so much to talk about and so many teams to debrief and everything.

“It may have helped us out a little bit. When you get some guys in there that have raced Cup and everything, I think that helps out our team a lot. I think it supplies more knowledge at some of these tracks that I haven’t been to a lot, that they have to kind of teach me a bit and show me some different lines that they run in the Cup race.”

Clearly, RCR has a full staff in the Cup Series with Dillon, Menard and Ryan Newman, with the younger Dillon competing for Germain Racing, an affiliation to RCR. Hemric has been on the upswing, posting four top 10 finishes in his first nine career XFINITY Series races. Gaughan will likely never compete full-time in the Cup Series, though he does have a pair of starts in the premier series this season, posting a season-best 11th at Daytona for Beard Motorsports.

Where does all of this leave Jones?

“I haven’t been racing that long in NASCAR,” he said. “I’ve only been racing seven years total, in my life. I don’t have a ton of car knowledge, but I’ve been with some great teams in the past with the Truck Series and now with RCR. I’ve been with some really good teams, and if I can take a bit from each one of those, I think I will be alright.

“I don’t want to jump up to early if I’m not ready. The time will come when I start figuring out this series a little bit. I want to at least get a couple wins in this and at least battle for the championship. It may not be getting the championship, but at least be in the Final Four and have a shot at it.”

After returning to action at Charlotte Motor Speedway, the XFINITY Series will see a stretch of 20 consecutive weeks of competition, going all the way through the fall Charlotte race on October 7. For Jones, his goal is to compete for victories and of course, make the playoffs.

Jones, 20, is looking to improve on those numbers, as well as solidifying his name next to other drivers that have made a name in the XFINITY Series over the past handful of seasons.

“From the truck to XFINITY, it’s a big step and then from XFINITY to Cup it’s like twice that,” he said. “I don’t know if it hurt us too much, but it’s hard to be competitive. Some of those Cup guys dominate, but I think that’s from having so much knowledge from the Cup side. It takes a couple years to get it.”