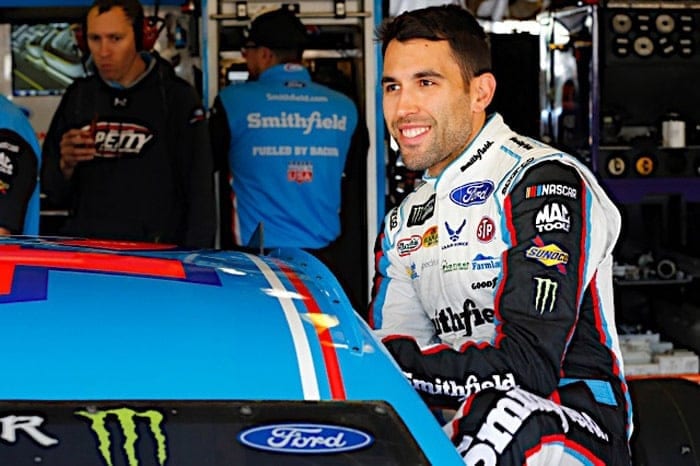 The wreck that overshadowed the Monster Energy NASCAR Cup Series race at Kansas Speedway highlighted a topic this column addressed the previous week regarding safety.  As Aric Almirola is still with us and able to walk should not be ignored by any stretch – and his appearance at the Martin Truex Jr. Charity function on Wednesday night showed that he may be hobbled but he’s not going to be kept still.

In conjunction, any criticism leveled at Danica Patrick should be tempered by the fact that she too absorbed a vicious hit.  When her car finally made its way back to the garage, there simply wasn’t much left of it, yet she was still able to give an interview and walk away in good shape.

This incident is just a reminder of how good they, and we, have it.  With that in mind,

Happiness Is…Testing.  Sure the school year may be coming to a close for most people and it’s time to forget about exams, essays and grades.  Hooray.  And a nod to all the recent graduates, whatever your level of schooling.  In contrast, however, NASCAR recently announced that they will be adding a tire test to the calendar, coming July 18 at Darlington.  Such an announcement seems rather paltry, a blip on the news heartbeat monitor, barely registering and signifying little.  In some ways, it is.

Some drivers abhor testing, seeing it as a waste of time, as the data gathered is mitigated by the conditions, while also taking time away from other commitments.  Even for the team, the value of the information is difficult to parse as the costs associated with the tests can be exorbitant.  Wasn’t the seven-post shaker rig developed to be able to test in-house and get the skinny on what’s going on?  To that matter, haven’t driver simulators taken over for on-track time?

That’s just it, though.  It wasn’t so many years ago that drivers had a number of more opportunities to test and practice their craft – and there’s something to be said for being on track and not driving by computer.  These testing sessions served to help younger drivers acclimate themselves to the sport by getting valuable track time, something that was taken away in the interest of keeping costs down.  The addition of this test is what makes for better competition and is something that would be great to see more of – even more so for drivers with less than a year’s experience in Cup.  They may not mean much to fans and press on the days of testing but the results eventually show up on race days.

Happiness Is…Trucks.  Blah blah blah, the All-Star race, do be do be do, yadda yadda.  Whatevers.  While the Cup stars will be doing their thing trying to earn even more money than the rest of the general population, the Truck drivers will be doing that most peculiar and irregular thing: holding another race.  Making fun of the Trucks schedule is about as easy as finding an offensive Twitter posting, but at least they’re racing again, and surprisingly, for the second consecutive week!

Kyle Busch brought outrage by doing what Kyle Busch does in Truck and XFINITY, namely winning, at the last race at Kansas.  The entry list shows his name again, so he could bring the wrath down again but it should be noted that he was stuck in second until his teammate blew an engine with a few laps to go last time out.  Perhaps Busch being on track will bring a paradoxical effect, something that one might consider: spite viewing.  Or maybe everyone will turn in for the series which still puts on some of the best racing.

Happiness Is…Bricks.  The thrum of engines that has been reverberating through the Midwest has been emanating from the Indianapolis Motor Speedway.  A day after Will Power’s win at the IndyCar Grand Prix, the drivers, teams, and track, ditched the road course to start getting ready for the big show at the end of the month.  While Fernando Alonso continues to grab the international headlines, with continual updates about his progress both in terms of speed and experience, the top of the leaderboard has been home to no driver consistently.

Some parts of this week are merely to suss out different things and gather information, while Wednesday provided a unique challenge with ripping winds, a considerable obstacle when hitting 200 MPH.  This weekend is when the teams truly let loose during the two days of qualifying.  These two days will be a chance to see if and who may have been sandbagging thus far while also giving a glimpse as to who has the advantage in horsepower between Chevrolet and Honda.  There’s still a sense that Honda has been coy and hasn’t shown everything that they have.

Whether you believe the stories or not, the two days of qualifying are the prologue to the 500.  The first nine spot on the grid will be established on Saturday with the rest of the field being filled out on Sunday.  The one disappointment is that there are only 33 cars entered, which means no one will miss the race and that once again the concept of Bump Day is removed.  Oh well, enjoy the start of the show, qualifying has been rather entertaining the past couple years.

Joey Logano took a vicious hit too, and still had the maturity and compassion to be an adult about it! AND SHE IS OLDER!

I don’t recall him posting on Instagram a plush time with a drink watching a sunset. SHE WAS NOT THE ONLY ONE IMPACTED! DESPITE WHAT PEOPLE WANT TO SPIN! Her interview was almost insane, the other part was pure narcissism. We all have enough wrecks to reference too post race interviews and all, I gotta say me and mine ain’t never seen anything like it. Hopefully never again. Spin it, but she was wrong.

“any criticism leveled at Danica Patrick should be tempered by the fact that she too absorbed a vicious hit”.

“everyone will turn in for the series which still puts on some of the best racing.”

Maybe you mean “tune in.” “Turn in” implies going to sleep, which is what the Cup “product” makes one want to do.