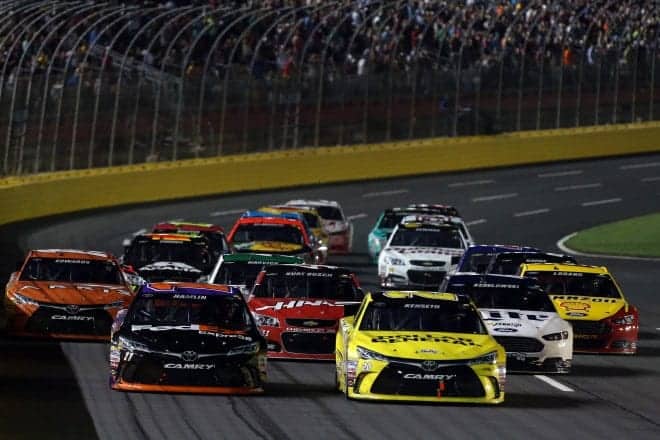 The 43rd edition of NASCAR’s annual All-Star Race at Charlotte Motor Speedway takes place this Saturday, May 20, and the event has come a long way since it first debuted as The Winston in 1985.

The event has been run at Charlotte every year since it began, except in 1986, when it was run at Atlanta Motor Speedway. It’s also been accompanied by the Open, a race to qualify for the All-Star Race, every year except for the inaugural event.

In nearly every other way, though, the event has changed numerous times.

This season’s format will be the event’s 14th different one, ranging from one to four segments and from 70 to 135 laps. And really, the event has had a rules change more often than not. In fact, the longest the race has gone without a format change was six years, between 1992 and 1997. Those races featured 70 laps divided into two 30-lap segments (all laps count) and one 10-lap segment (only green flag laps count).

The following format lasted from 1998 to 2001 and featured the same segments, except that only green flag laps counted for every segment, not just the final one. No other format has lasted for more than four years.

This year, however, will be the third different format in as many years. This season’s 70-lap format is a nod to the 25th anniversary of the spectacular 1992 edition of the Winston. The race, which featured an intense finish between Davey Allison and Kyle Petty, is commonly known as One Hot Night. The 1992 event was the first in a six-year stretch of races featuring the same format.

NASCAR also reintroduces an elimination-style format in 2017. Only 10 cars will qualify for the 10-lap finale: Those who win the first three segments and those with the best average finish in the first three segments. The race will become a 10-lap shootout featuring the best of the best in the sport. It will also force the drivers to race as hard as they can every lap instead of riding in the back until the final segment, similar to what Joe Gibbs Racing did in the Talladega Superspeedway playoff event last year.

The big change in this year’s All-Star Race, though, is NASCAR’s use of soft-compound tires. Teams that qualify for the final segment will be given the option to use softer tires, which provide more grip and, therefore, more speed. However, teams that choose these tires will be required to start behind those with normal Goodyear rubber. So, along with the 10-lap shootout, some drivers will have several tenths of a second per lap on the others.

NASCAR has used its All-Star Race as a proving ground for a number of changes, including segments, which were introduced this season. It has gone through many iterations, each trying to both enhance the entertainment value and mull possible changes for future season’s points races. This year’s expedition may determine the fate of different compounds of tires in NASCAR, and will certainly provide a reason to watch for many.