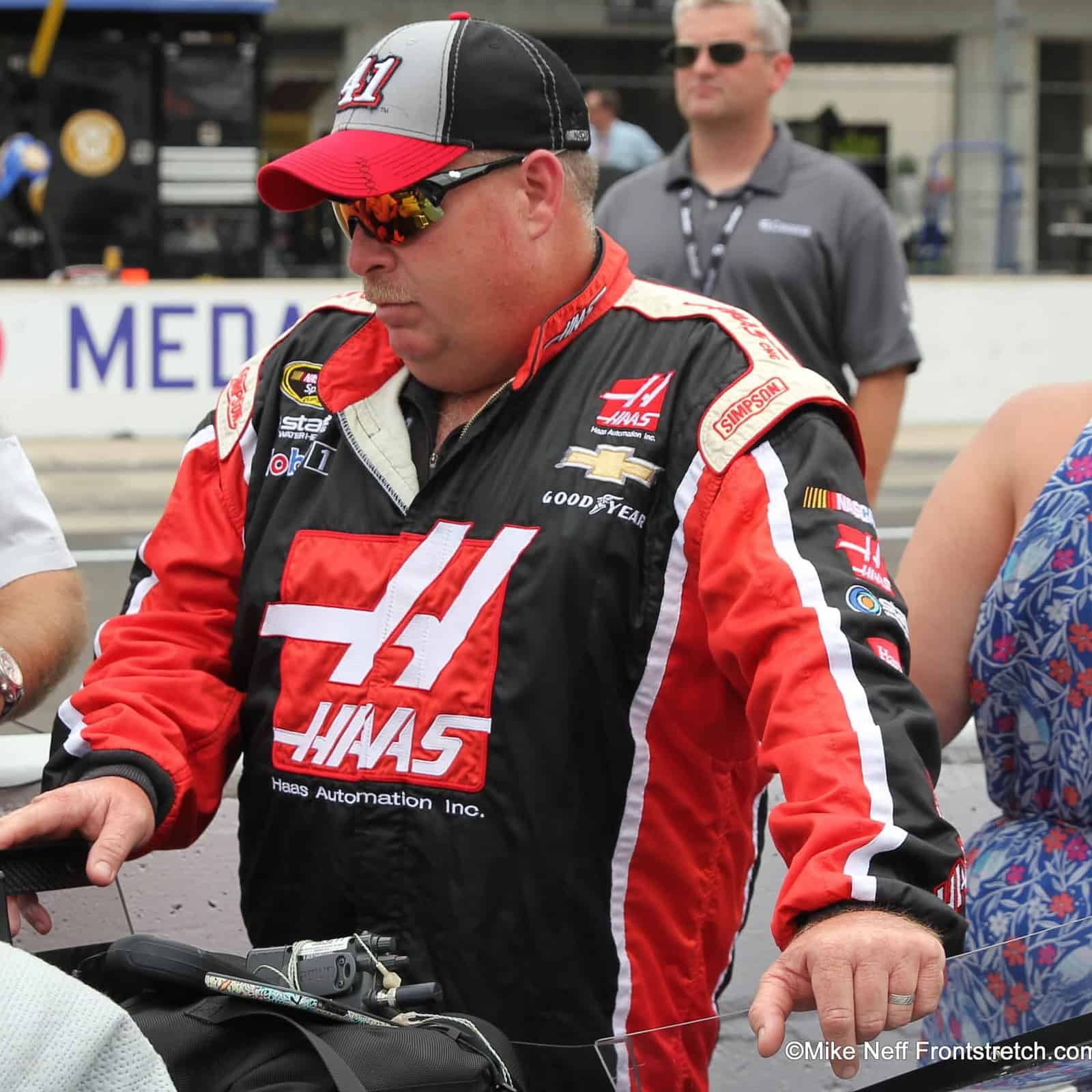 Tony Gibson and the No. 41 crew of Kurt Busch have been trying to find speed in their non-restrictor plate cars since their season-opening victory in the Daytona 500. This past weekend at Kansas Speedway, it appeared as though they, along with the No. 4 car of Kevin Harvick and the No. 10 team of Danica Patrick had really hit on something.

Unfortunately for Gibson, their car was caught up in an incident on the penultimate restart of the race, derailing a very good day.

Gibson looks back at Kansas and that spurs a discussion about the inspection process and how he feels about the Laser Inspection Platform (LIS). As for this week, he speaks about driver comfort, or lack thereof, in order to get maximum speed out of the car, the 10-lap mindset versus the 600-mile mindset, preparing for the new alternate tire compound and the importance of the pit stop in determining the success of your night in the All-Star Race.

Mike Neff – You got to qualify at Kansas so you didn’t have the inspection issues that some of the other teams did. What is your take on the LIS platform and getting it through technical inspection before qualifying and the race?

Gibson – It is very difficult. We failed the first time going through. We didn’t fail LIS, we failed a body deal that we had to go around and fix. It is really, really tough. We actually failed race morning. We didn’t change anything.

It is kind of a crap shoot with that thing, going through. Especially at Kansas, it is really bad there. Where the inspection bay is for the LIS, one part of it is in the FanZone, so the sun blares right in on that side and the other side is shaded with the wall there. That thing … has little beams that measure everything. When the sun is shining in on one side it kind of blinds out/whites out the laser.

We see that a lot of times in places where the inspection is in a position like that where the sun is hitting one side and not the other. When that happens, we always seem to struggle as a group. Chicago[land Speedway] is that way also where we tend to have problems.

It is just tough when you are dealing with two or three thousandths. We buy these rims, and the best we can purchase them is within 20 thousandths each. If you have four of them on there and each one of them is 20 thousandths off, you can do the math. It is a pretty big change; we fight it every week.

Neff – Is there any pressure coming from the Race Team Alliance to get a change on how that thing works so that you aren’t running into this problem on a regular basis?

Gibson – We are frustrated with it, owners are frustrated with it and so are the sponsors. That has to be a NASCAR call on whether they want to try a different approach on a piece of equipment or what. They have a lot invested in these platforms to change that. I haven’t heard any talk about it.

I know I sure would like to see something different. The most stressful thing we do all weekend now is go through inspection. You hold your breath because you never know what that thing is going to read. It doesn’t look like NASCAR is going to do anything with it. NASCAR seems to be happy with it, I guess. As race teams, we’ll just have to go through the stressful part of it and hope we don’t miss qualifying or have an issue and get hit with penalties. It is what it is.

Neff – Speaking of stressful, you are now headed to Charlotte for the All-Star Race to run for $1 million. They have thrown a couple different wrinkles at you for this weekend. Do you bring a throwaway car, is this your Coca-Cola 600 backup or how do you approach this weekend?

Gibson – This is the car we ran Texas [Motor Speedway] with. We don’t have throwaway cars anymore (laughs). It is so hard to turn cars around now with everything that goes on and the inspection process being so close. It is really hard to turn them around so we really can’t afford to wreck a car or get rid of one at all. We don’t want to go over there and wreck, but it is a million bucks.

Neff – Approaching this race you have a mentality of a sprint race, not a marathon. How do you approach it differently with your setup of the car, with that in mind, for this race as opposed to the 600?

Gibson – We want to be as light as we can. We don’t want to carry a bunch of weight. We don’t use the tire blowers and fans to cool the brakes. All of our brakes are as light as we can afford to run there, just for the rotating mass. Anything that we don’t need that we’d normally carry for a 500- or 600-mile race, we just get rid of it.

The driver has to suffer through some things. It may get a little hot in there, but he only has to run a few laps before we can get him something to drink. We get really aggressive on everything with our cambers and our toes. The bodies are what they are, you can’t really do anything with those anymore. We just try to get it as light as you can.

We’ll just focus on running 10 laps at a time. That is really all we care about, how fast it will run for 10 laps. We will get over there and see whatever it takes air pressure-wise. We may go over there and just try a qualifying setup to see what we can get for pure, raw speed out of it for 10 laps.

Neff – Do you make the car even stiffer than you normally will since it only has to survive a few 10-lap sprints rather than enduring the pounding it takes over a 500- or 600-mile race?

Gibson – Yeah, all of our suspension setup will be pretty much what we qualify to try and get max grip and max aero out of the thing. They probably won’t be that fun to drive, but it is a million bucks, so he can hold onto it for a few laps.

Neff – NASCAR is running up this trial balloon over different compound tires. Have you heard more if they’re going to give you some to test with before the race to see what the car will do with them?

Gibson – Yeah, NASCAR is giving us one set of the softer compound tire to run during practice. That way we’ll have some idea of how much faster it is than the control tire and how fast it falls off. When it comes time to race, we need to know how much they lose over the run. We’ll probably run 10 laps on a control set and 10 laps on the soft set so that we know what that split is and the driver will know what that feels like. In case we need to make a chassis adjustment to account for that. Then it is just a matter of when you are going to put those things on during the race.

Neff – From a strategy standpoint, have you tried to run through scenarios to have an idea at what point you’ll throw those tires on?

It will be tough to sit there and lay out a scenario because every time you do it will change. We sat down with Kurt this week and went over different scenarios of what we’d like to do, but it very seldom goes the way you plan.

Neff – Qualifying for this race is always cool, unique and stressful all at the same time. Has your pit crew been putting in a little extra time this week since qualifying and track position are so important for this race?

Gibson – Yeah, they have been working all week and worked last week too, trying to get every little thing ironed out and get everyone warm and fuzzy. Everyone comes up with something neat and crazy for this deal.

The pit stop is everything. You can be two or three tenths quicker on the race track, and if your stop is half a second slow or a second slow it is all for naught. We will just have to stay on top of everything. Getting on pit road and off of pit road is really, really critical on the driver’s side of things. Between that and the pit crew’s stop, that will dictate where we start and greatly impact our night.