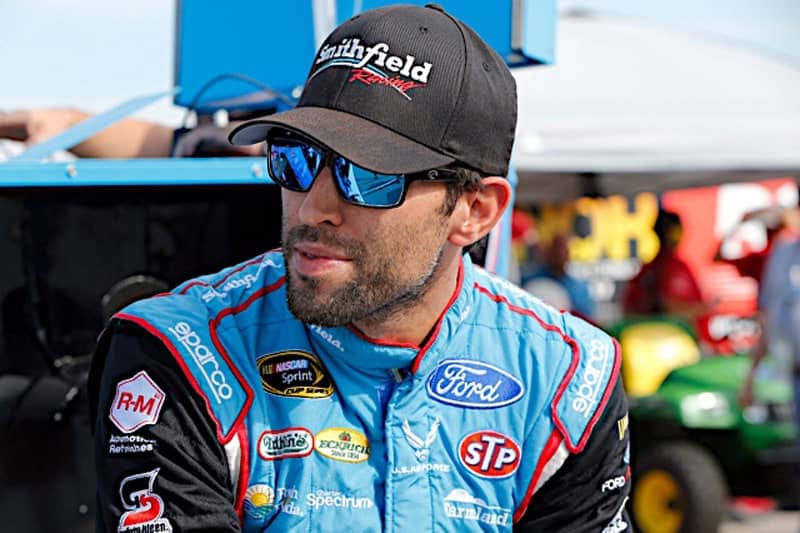 Aric Almirola faces a long recovery after breaking a vertebra in a fiery crash last weekend at Kansas.  Almirola told members of the media that he’s been told that the typical recovery time for an injury of the type and severity that he has is eight to 12 weeks, and one thing the driver of the No. 43 Ford will not do is rush to get back in the seat before the injury has healed completely.

“I’ll come back when the doctors clear me,” Almirola said in his Friday morning press conference. “I won’t rush it.”  He added that another racing impact to his back before it’s fully healed could leave him paralyzed.

After taking one of the hardest hits recorded in NASCAR, Almirola was extricated from his car and airlifted to a local hospital, where the fracture was diagnosed.  Almirola was able to return home to Charlotte on Monday.

Veteran driver Regan Smith will pilot the No. 43 in the Monster Energy Open Saturday, as well as the All-Star Race if he can win a transfer spot.

Almirola said that he saw the initial crash unfold in front of him on Saturday night.  He was nearly two seconds behind Joey Logano as the field headed for Turn 1, but he had committed to the top line, and as he tried to turn to the bottom to avoid Logano and Danica Patrick, he got into fluid from the crash and was unable to turn or slow down from that point.

Almirola says he felt pain in his back on the initial impact with Logano and then the rear end of his car lifted high enough that he could see the pavement below him.  When the car came back to Earth, Almirola took a second hit which he described as “a knife twisting” in his back.

Team officials stated Friday that a longer-term replacement has not been decided upon yet; the team is working with sponsors and drivers to determine the best choice to fill the seat until Almirola can return.