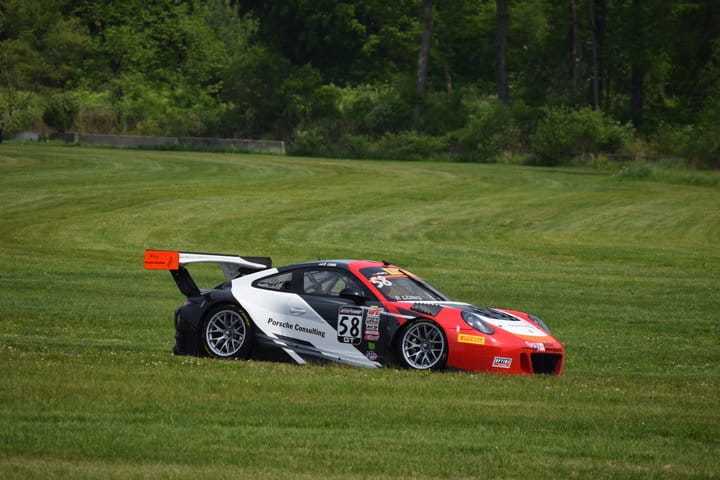 Long turned in a lap of 75.221 seconds (117.685 mph) around the 2.459-mile road course to qualify second fastest for the CTMP Sprint-X Race.  Only R. Ferri Motorsports’ Alex Riberas was faster.  However, Riberas crashed his Ferrari 488 GT3 in turn 3 and brought out the red flag.  In accordance with Pirelli World Challenge rules, Riberas lost his fastest lap.  As a result, Long will start Saturday’s first Sprint-X race of the weekend from the overall pole.

Long’s lap was only five-thousandths of a second faster than the DeVilBiss-sponsored Mercedes driven by Daniel Morad.  Riberas’ second fastest lap was good enough for third on the grid.  However, the No. 61 Ferrari suffered a lot of damage in the crash.  Whether or not the team makes it to the grid depends on how repairs go.

In the Pro-Am/Am-Am session, Always Evolving Racing’s Frankie Montecalvo was quickest with a lap of 75.779 seconds (116.819 mph) in the lone Nissan GT-R.  Montecalvo’s lap was good enough for sixth overall of all Sprint-X teams.

In Am-Am, NGT Motorsport’s Tyler McQuarrie was quickest with a lap of 77.042 seconds (114.904 mph) in his Ferrari 458 GT3.  This lap was fifth quickest in the Pro-Am/Am-Am session and 15th overall.  The lap was 28-thousandths of a second faster than The Racers Group’s Kris Wilson.

Sprint-X Race No. 1 is scheduled for 1:45 p.m. on Saturday afternoon.  It will be streamed live at world-challenge.com for free.  It will also be streamed on Motor Trend OnDemand.