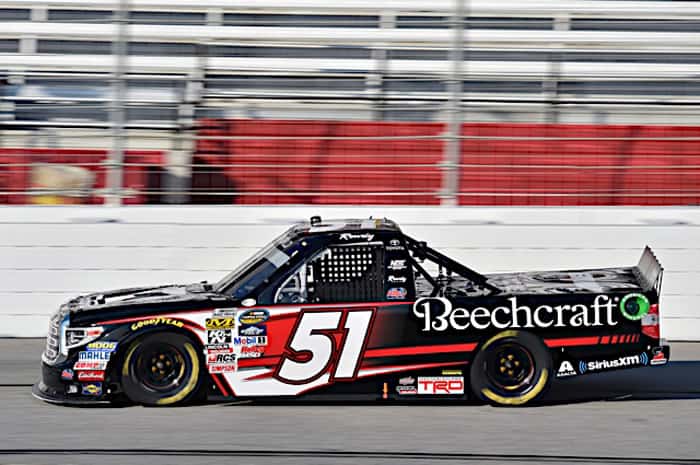 In a Nutshell: Kyle Busch scored his seventh Camping World Truck Series victory at Charlotte Motor Speedway Friday night. Making a bold move to jump from fourth to the lead with less than 20 laps remaining, the driver of the No. 51 Toyota pulled away from the field in a three-lap shootout to the finish. Johnny Sauter and polesitter Christopher Bell finished second and third, respectively, while Ryan Truex and Timothy Peters rounded out the top five.

FINLEY: The Kyle Busch Show On Full Display In Charlotte

Who Should Have Won: Last weekend in Kansas, the fastest truck won the race… to the garage. This week, that wasn’t the case. Kyle Busch had the truck to beat from the drop of the green flag, and he proved it, winning all three stages and leading a race-high 90 laps. The victory marks his 48th career Truck Series win, quickly approaching Ron Hornaday’s career record of 51.

Bell started on the pole for the third time in the last four races, but his run to the front didn’t last long. After just two laps, Bell suffered a punctured left rear tire and was left to limp his truck along the apron to an unscheduled green flag pit stop. After changing left side tires only, the driver of the No. 4 Toyota pulled off pit road ahead of leader Kyle Busch but was already a lap down.

Bell remained stuck there until the end of stage two. That’s when he finally found himself in position to take advantage of the free pass. He became fun to watch after that, as a combination of pit strategy and a fast truck allowed Bell to slice through the field. Moving back up into the top five, he even challenged eventual winner Kyle Busch for the lead in the closing laps before ultimately dropping to third.

“I think we had a flat right rear – or left rear when we fired off,” Bell said after the checkered flag flew. “It was really really loose the first couple laps and then finally went down off of (turn) 4 there. All these guys on this SiriusXM Tundra did a great job of getting me back out there. I had a second-place truck. Ran third with it. That’s what’s frustrating. Glad my boss won, that’s cool. We’ll be back and stronger than ever at Dover.”

When you’re disappointed to finish third, you know you’re doing something right. Perhaps the biggest difference for Bell this season compared to last year isn’t as much that he’s avoiding trouble as it is he’s handling it better. Though I’ve never been in their shoes, I’d imagine one of the biggest obstacles facing young drivers working their way up the NASCAR ladder is how they handle adversity. It can either be a distraction, a hindrance the rest of the race, or it can be something they’re able to put behind them and move forward from.

It appears Bell has learned how to forget whatever adversity befalls him and his team while focusing on what he can do right for the remainder of the race. We’ve already seen it pay off for the driver of the No. 4 and that should be a trend that continues throughout the remainder of the season.

When a driver can pass Kyle Busch cleanly, without the assistance of lapped traffic or a mistake by the 48-time winner, it’s enough to make you sit up and take notice. That’s exactly what Ryan Truex did in the closing laps of stage two. In fact, he even found himself in a three-wide battle for the lead with veterans Matt Crafton and Johnny Sauter.

After getting loose in that battle, Truex ultimately dropped to sixth to end the second stage.

Truex remained in the top 10 for much of the final stage Friday night but was hindered slightly when he had an uncontrolled tire on a late-race pit stop at lap 103 that dropped him all the way back to 16th. Mired at the tail end of the field, a comeback was a daunting proposition but a strong truck didn’t leave the driver of the No. 16 Toyota mired in the pack for long. Truex worked his way forward to a fourth-place effort by the time the checkered flag flew. It was best result since finishing runner-up in the season opener at Daytona last year.

Normally, a fourth-place result would be enough for a casual mention of the top five. However, for a team like HRE that was sidelined last year due to sponsorship, a guarantee that all races are funded throughout the entire 2017 season, coupled with hard work through the six-week break between Martinsville and Kansas has really paid off.

While I’m not quite ready to guarantee a trip to Victory Lane this season, it wouldn’t be at all surprising to see the organization pull off a win at some point soon. For Truex, it would be a bit of redemption after how hard he’s worked to find himself a full-time NASCAR home.

CATANZARETI: Truex One-On-One, On The Road To Redemption Again

No. of rookies to finish in the top 10: 1; Noah Gragson, finished ninth

Rookie of the Race: Noah Gragson

Points Update: Sauter remains atop the standings following a second-place finish Friday night. He expanded his lead to 15 markers over Bell, thanks to bonus points for ending the first and second stages in second. Matt Crafton sits third, followed by Briscoe.

Ben Rhodes and Timothy Peters leave Charlotte tied for fifth, 72 points behind the leader. Grant Enfinger sits seventh, followed by Kaz Grala. Truex and Brett Moffitt round out the top 10.

Up Next: The Truck Series takes a week off before heading to Dover International Speedway Friday, June 2. Coverage for the Bar Harbor 200 begins at 5:30 p.m. ET on FOX Sports 1. The race kicks off a stretch of five straight weekends with the trucks on track.

I love the truck races anymore ! Except when one of the BIGBOYS win ! It’s the best racing going now adays ! What a joke (bad) that All Star race was last nite !PITIFUL !!!!