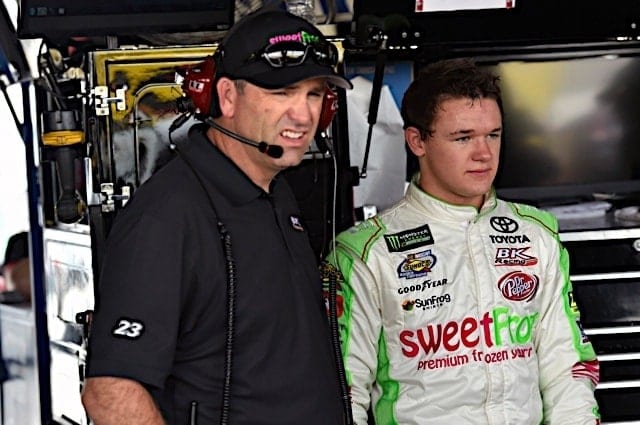 When you’re a crew chief in the Monster Energy NASCAR Cup Series, you must gather knowledge of racetracks, racecars, rules, pit crews and car setups to have a shot at the competition.

But when you’re working with a rookie driver like Patrick Donahue is, a chunk of the crew chief’s attention turns to mentorship.

For Donahue, the 2017 season with BK Racing has him working with 19-year-old driver Gray Gaulding, who comes into the year with only four prior starts in both Cup and XFINITY combined. The pair now has 10 races under their belt in 2017, sitting 36th in points with an average finish of 32.1.

But with three DNFs already, the experienced Donahue, who starts his fifth year with the Toyota team, knows the two-car operation is at a disadvantage against the top teams of the Cup Series.

“For the amount of experience [Gray] has coming into this year, I think he has done exceptionally well,” Donahue said. “He listens and works really hard at it. Has he made some mistakes? Yes, but a lot of rookies make mistakes.”

Unfortunately, the team has seen a few too many of these mistakes, with both Gaulding and fellow rookie teammate Corey Lajoie impacting the wall in nearly every race this season. Together, the duo has nine finishes of 30th or better.

“We are not afforded too many mistakes,” Donahue said. “Sometimes, we have to rein it back a little bit. We don’t have an over-abundance of racecars back at the shop we can go through each week. I have to pull him back a bit knowing we have to have this car for two weeks down the road.”

In terms of technology at BK’s fingertips, it all comes from the inside, as team owner Ron Devine insists they build their own parts.

“There’s maybe 50 people there, building our own chassis, hanging our own bodies, building own parts,” he said. “That’s still a lot of people, but in the group we’re racing in, it’s not. Very few of the smaller teams build their own parts and cars. The Front Row’s, most people don’t take the challenge. We do. That’s something Ron wants us to do.

“Are there better options? There are people who go buy cars and motors from bigger teams and their results are better. That’s their choice and it comes at a cost. It goes hand-and-hand.”

Due to the lack of inventory during a full-time Cup effort, Donahue has had to battle a little harder than the average crew chief.

“We are not rich, a lot of the race teams are,” he said. “We’re not one of the larger funded teams, that’s the reality of it. Yes, the cars are decaled and look nice, we just don’t have a lot of extra people to work on projects, develop new chassis. We just don’t.

“We do struggle and I do see the comments. Last year, we had good finishes and at times had fast racecars but things change.”

In times of struggle, doubt and difficulty, one of the smallest teams in the Cup Series, who have scored only two top-10 finishes in 449 starts, can use an experienced personality in charge.

For the No. 23 team, Donahue has learned from his past from the ‘Rainbow Warriors’ with Jeff Gordon, Ray Evernham and Hendrick Motorsports, to know how to properly build a young driver.

He knows what it’s like to learn from the top at a young age.

“I was very fortunate, I was a teenager and I was extremely fortunate,” he said of winning three Cup titles with the No. 24 team in the late 1990s. “I had good people who looked out for me and made sure I kept my mouth shut and learned. As a young crew chief, I got a lot of experience early because I had people I could lean on.

“Gray, he’s learning at a Cup level to race with some of the greatest drivers in the world. I have seen some who take their opportunity for granted. I always say you have to work on being a racecar driver. To me, the ones who come in and work the hardest, they’re the ones who will go some place.”

Less than two weeks removed from the team’s first top-20 finish at Talladega Superspeedway, Donahue is upbeat feels a respectful driver like Gaulding will go far places in this sport.

“Gray is very respectful of me and my guys,” he concluded. “He appreciates the effort and that goes a long way. He’s a nice young man, he was raised well and from what I’ve seen, he does respect the opportunity he’s been given.

“All in all, we work every day and it’s coming together. We’ve torn up a few racecars early this year and we’re trying to recover from that. If we can get [to finishing] in the 20’s, I would be happy with that.”