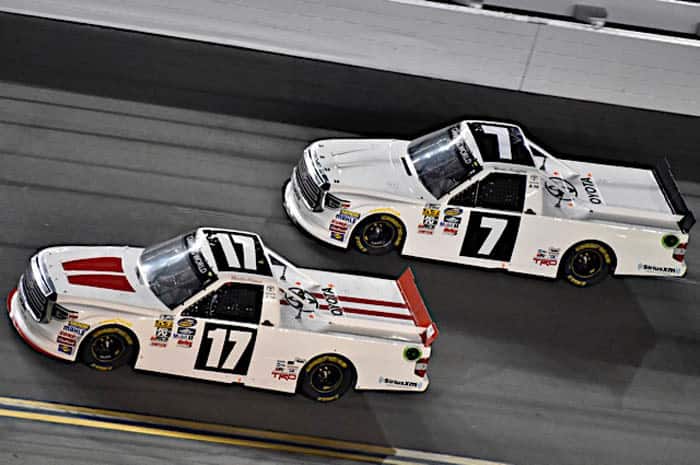 One of the most recognizable teams in the NASCAR Camping World Truck Series is on its way out of the garage altogether.

After 13 years, Red Horse Racing has opted to suspend all operations, effective immediately.

The move comes due to a major lack of funding for their two full-time truck teams, piloted by veteran Timothy Peters and Brett Moffitt.

“I tried as long as I could but I can’t keep funding it out of my own pocket,” team owner Tom DeLoach told Motorsport.com. “We’ve tried as best as we could but I’ve finally decided I may be building a bridge to nowhere.”

DeLoach has fielded full-time teams in the NCWTS for over a decade, beginning in 2005.

He has also told team employees that the organization is still searching for potential partners to keep the team up and running for the time being, but will allow them to look elsewhere for jobs.

Peters earned a season-best fifth place finish in this past weekend’s North Carolina Education Lottery 200 from Charlotte Motor Speedway in the No. 17 Toyota. Moffitt came home 18th in the No. 7 entry and has a season-best finish of sixth at Martinsville Speedway.

Peters, who has finished in the top 10 in the points standings each of the last eight seasons, sits sixth in the overall standings. He was one of four teams to compete for the title in the Championship 4 last season at Homestead-Miami Speedway. Moffitt is currently 10th in the standings.

Seven drivers have visited victory lane for RHR throughout its 13-year run. Peters leads the team, with all of his 10 career victories coming in a Red Horse truck. His last win came in fall 2015 at Phoenix International Raceway.

Should we give a special thanks to the Kyle Busch Show for this?

The caution clock last year didn’t help. I stopped watching the truck races when they announced that and haven’t really started watching them again since.
And, yeah, if I happen to turn on the truck race and Busch is in the field, I immediately find something else to watch.

Take a bow Pouty Schrub! So thankful “caution clocks”, “chases” & “staged dog & pony shows” have attracted hoards of “key investors” to the category. Thank you so much Brian “Danny-Boy” France. Really!
In ’14 the CWT series was the most entertaining racing & integral Nascar offered. Now I don’t even watch anymore!

Maybe they can joint venture with Joe Nemechek, another sponsorless truck who is competitive.