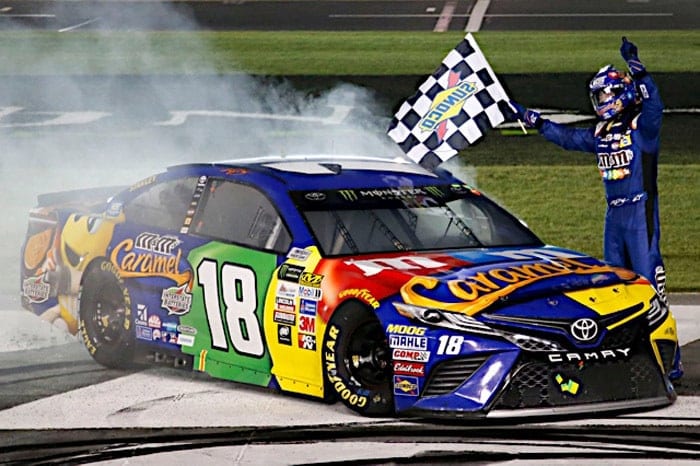 Typically I try not to give the shout-out to the winner of the race, but at the end of the day, that’s really the only thing everybody remembers about the results of this race, right? Points aren’t awarded and it’s not like, say, Matt Kenseth’s season has taken a big step back by finishing last. Nobody is going to remember that Kevin Harvick finished sixth.

With that said, Kyle Busch deserves the shout-out, partially for winning the race and partially for finally getting on the cover of a video game. Busch had to beat Martin Truex Jr. in the second stage to land on the cover of NASCAR Heat 2. Busch beat Truex, finishing third compared to Truex’s 13th, and the game will be gracing store shelves in September.

At this point, it’s pretty obvious that NASCAR needs to just take a sledgehammer to the All-Star Race format and go back to the drawing board. At the very least, it needs to be moved to the daytime and away from night. These cars just have too much grip and horsepower at night for any real passing, especially out front in the clean air. At the very most, it needs to just be moved to a more exciting track.

Another problem I have with the All-Star Race is that there are just too many drivers in the race, with a weird list of criteria compared to other All-Star events. Dale Earnhardt Jr. isn’t even in the top 20 in points, yet he’s an All-Star in 2017 because he won the race nearly 20 years ago. Imagine if Ichiro Suzuki was locked into the baseball All-Star Game this year before the first pitch of the season thanks to being the game’s MVP in 2007.

This may seem like a weird criticism to make, as most seem to be fine with the requirements to make it into the race. But the first step to making the All-Star Race matter again is to make it matter, with only recent accomplishments being used to judge the field.

When Rusty Wallace was nominated for the NASCAR Hall of Fame, not one person listed one of his accomplishments as making 19 straight All-Star Race appearances. Meanwhile, in every other sport, 19 straight years of being an All-Star would be an automatic lock for their respective Hall of Fames. Why should anybody care about the All-Star race if it ultimately means nothing in a driver’s career? Right now, it’s ultimately a race where the winning millionaire makes another million dollars.

Kyle Larson won the first two stages of the race handily, but never really regained the lead after losing it in the round of pit stops between the second and third stages. He lost the final race off pit road and almost wrecked with Brad Keselowski on the final restart. He pulled off an amazing “slide job” move on Jimmie Johnson in the final turn to finish second to Busch.

Joey Logano had a race that really wasn’t that notable. After finishing one-two last year, the Team Penske teammates of Logano and Keselowski finished eighth and ninth, which would have been dead last among drivers in the final stage if not for Denny Hamlin finishing 10th after a late-race tire rub.

A closed loophole ended up costing Keselowski a shot at winning the race. The No. 2 team changed to their set of option tires between the second and third stages, but then Keselowski had to go back down pit road before the restart due to a lug nut issue. While on pit road, Keselowski changed all four tires and planned to use the scuffed options for the final stage, but NASCAR ruled that the options could only be used as sticker, or new, tires. Keselowski had to use the same set of regular tires for the last two stages, and finished ninth after being passed by most of the field. Keselowski took to Twitter to complain:

Correct. I did not know we didn't pit because @Nascar made up a rule.

Apologies to all that it effected. https://t.co/VaN9g84OjV

NASCAR has since clarified it did not change the rule — the loophole was closed on the entry form Keselowski filled out in order to enter the race.

Why… did Kyle Busch win?

He restarted third and took it three wide on the restart to start the final stage. With Keselowski right in front of him and Johnson in second not being allowed to pass Keselowski until after the start-finish line, combined with just how huge advantage clean air was in the lead, it was academic. Whoever restarted third and forced it three wide on the restart would win the race.

How… much more until something changes?

Charlotte really needs a good Coca-Cola 600 this year. There hasn’t been a good race at Charlotte in a while outside of the last couple of open races before the All-Star, and the prestige of the 600 has definitely hurt a bit the past few years. It will always be an important event on the calendar, but to me the Southern 500 on Labor Day weekend has already passed it again as the second biggest race of the season.

Charlotte desperately needs to have a good race, or else it may be liable to lose a date to a track like New Hampshire, Atlanta, or even Kentucky. Don’t believe the track is in danger? Then why has there been so much hoopla about running the infield road course? That’s a move that just reeks of desperation.

Number 7: When will Brian wake up and realize that his changes suck?