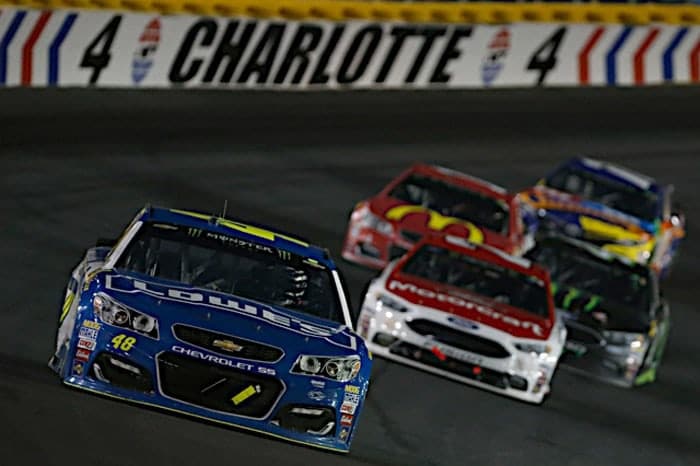 If you were hoping some changes would be made to NASCAR’s national series with regards to its 2018 schedules, you’re in luck.

Today (May 23), the sanctioning body announced the schedules for the Monster Energy NASCAR Cup Series as well as the XFINITY and Camping World Truck series for the 2018 season.

One of the biggest changes: the final regular season event in the Cup Series will be held Sept. 9 at Indianapolis Motor Speedway, followed by the 10-race playoffs that will include a race on the road course at Charlotte Motor Speedway.

Additionally, Richmond International Raceway will now host a race within the playoffs on Sept. 22 after traditionally holding the final regular season race before the playoffs began. It replaces New Hampshire Motor Speedway, which scales back to one event in 2018.

The season will conclude for all three series, as with the past few seasons, at Homestead-Miami Speedway.

There are no major track additions for 2018, aside from the shift from Charlotte’s usual speedway to its road course for the September Cup event.

“Fan feedback was a major driver in developing these schedules, and we worked very closely with the industry to set the stage for an exciting 2018 season,” Steve O’Donnell, NASCAR executive vp and chief racing development officer, said in a release. “This season has delivered more dramatic moments to fans, and with the adjustments to the 2018 schedules we’re in a great position to build upon that success.”

See below for a full rundown of the Cup, XFINITY & Truck schedules for 2018.

Just when you thought it couldn’t get any worse! Richmond is replaced with Indy as the finally? Why Brian said it was fan based; any NASCAR fan I know absolutely hates this track and absolutely produces a terrible on track product. Well expect the ratings to plummet even more next year. Big Bill would whoop Brian’s A$$ if he were still alive!!! I don’t have all the answers to fix the problems as they are stuck with all these cookie cutter race tracks now; however I would suggest opening the rule book, get rid of the splitters, get the cars offf the bumpstops, eliminate the shark fin, and let the crew chiefs be able to experiment a little bit. I’m all for safety but ever since the gen 5 car was released it has been all down hill. I know the good ole days are long gone but I still hold out that someday Brian will be releived of his duties and someone else will take over and right the sinking ship. I still love the sport but it is getting harder to watch every year.
Now with this absurd schedule coming out for next year I cringe even more. To top it off Indy will most likely be a restrictor plate race for next year so it’s either going to be a Jeff Burton at Louden and lead the whole race or it will be missing the big one and lucking into the playoffs.

Take the “race” at Kentucky before Mother’s Day and move it to a second real race at Darlington!

Seems like a pretty decent refresher. I will largely go with the flow, & I am anxious to see how it goes. RIR & IMS need the boost that I think this will indeed provide. I’m not sure why it got overlooked it here [Kevin], but LVMS is now the Cup “chase” kick-off race, which seems innocuous, but I think is huge & a foreshadowing of the future. LV is a great town & venue for Nascar! I think it is a great idea to boost LVMS’s post-season stature & that, eventually, it will replace Miami as the season finale (…you heard it here first).
I love an additional road-course on the slate, but Charlotte was anchoring my wish list. Other than being bland & uninspiring, which is very clearly is, is there one other major motorsport category who has used Charlotte’s in-field extensively? “There’s yer sign!”
In recent years, I see only GRC (which uses only part of the full infield, after covering some of it with dirt & installing imbecilic x-game/monster-truck style jumps), a few Pirelli WC events & a few IMSA GT’s events (back in the 70’s & 80’s). So, don’t ask me why, but it seems the incorporated motorsport giant, Nascar’s Cup series, is seemingly attempting to emulate the hair-brained, feeble-minded & blissfully unenlightened practices of GRC’s low-ball low-appeal game. I wish all them the best, but since I don’t know of one “major” category to use it extensively, now or at anytime in the past, it seems like an odd choice & risky decision. And one that will, with little doubt, require extensive investment for re-work (pit road reconfiguration, in-field course repave, huge amounts of safety barrier installations, & flagger, safety worker & control lighting station installations). Lest we forget, fans & event associates will no longer be able to park or use the majority of the infield. Therefore, I think represents a huge & very unnecessary gamble, & throwing investments into the wind.
I’m am still for it, but I would much rather see Watkins Glen (or even the Dega, Tona or Indy in-fields) moved into the “chase”. WGI would be a much more realistic test of Championship wares, since ALL Nascar drivers have experience there. In-field courses at Dega, Tona & Indy at least have major motorsport legacy to lean on. Where-as Charlotte’s in-field is an anomaly that only leans on the twilight zone of the unknown. Nascar seems to delight in injecting every growing proportions of unquantifiable entities & uncontrollable circumstances into it’s driver’s championship scenario, hence GREATLY devaluing them for this life-long motorsports advocate.

I wonder what in blazes made them decide to move the first Dover race to early May? Traditionally that race was run the week after the World 600. Still just three weekends off; August 25th, June 17th and Easter on April 1st. So
A) As usual we face a nightmare of a weather delay that pushes the race not to Monday or Tuesday but has to be postponed until a different weekend. It does happen. It’s just been awhile
B) Look for more big name drivers to exit the sport in their early 40s tired of the demands of the road. Even Dale Junior grinned wistfully when asked if he’d have made the same decision to retire if the schedule was 8 to 10 races shorter.

Good question about Dover. It’s been the week after the World 600 for the last 20 years except for 2016 (May 15th) and now 2018. I guess since that track is not owned by ISC or SMI they pretty much get whatever they’re given and have little power to change it.

I think you mean finale instead of finally.

Brian should have been out a long time ago but it won’t be a quick fix for whoever takes over due to the damage he’s done. If some of the earnings keep going down there’s a chance he’ll get the boot but I think the real test will come when the TV contract comes up and they say “You want how much?????”