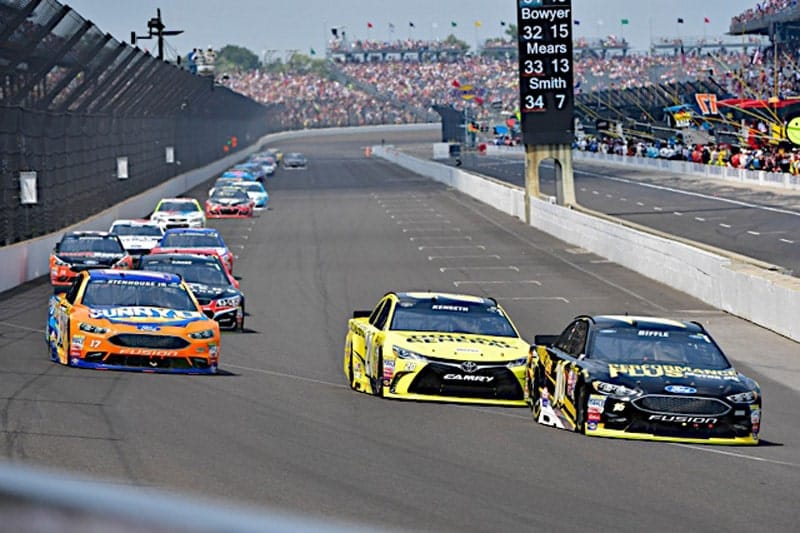 While it may not be enough, a shakeup at the end of the season was needed. The addition of a road course and a short track are absolutely sound moves. Las Vegas?  Meh. It replaces Chicagoland, so it’s pretty much an even trade. Charlotte might not have been the best choice of a road course, and it’s probably not what most fans had in mind—there’s a pretty big difference between a true road course and a roval, but remember, tracks have locked down their deals for the next several years, and Charlotte probably wasn’t going to budge on their playoff race. At least it will be run during the day.

The change leaves the playoffs with one road course (Charlotte), two one-mile ovals (Dover and Phoenix), two ovals shorter than one mile (Richmond and Martinsville), one superspeedway (Talladega) and four intermediate tracks (Las Vegas, Kansas, Texas and Homestead).  That’s still one intermediate too many. The New Hampshire race should have remained a playoff race.  Overall, though, it’s a decent mix, and fairly representative of the full season. I give it a B minus.

Moving Indianapolis to the final regular-season race makes very little sense. It’s the least compelling and least competitive race on the Cup circuit year after year, so why make it so pivotal? There’s very little chance of a last-minute unexpected winner squeezing into the

playoffs, but a great chance of a strung-out field with one team dominating.

Two suggestions here. One, and the easiest, would have been to make Darlington the last regular-season race, giving teams the following week off leading into the final 10. Darlington still races more like an intermediate than anything else, but has produced better racing than Indy has.

The other, and my favorite, would be to move Talladega out of the playoffs altogether and make it the last regular-season event. This accomplishes two things: it gets the craphoot nature of a restrictor-plate race out of the championship picture, and it would make the end of the regular season anything but predictable. Teams already in the playoffs would not have to worry about being tangled in somebody else’s wreck, and there’s an excellent chance for an underdog team to squeeze in under the wire. It would certainly make nothing a foregone conclusion going in, and the drivers at the bottom of the top 16 would really have to sweat it out because another winner could end their title hopes.

What absolutely should not have happened was returning the spring Richmond race to a Saturday night show. The track says it was at the fans request, and I have to wonder what race those fans were watching because the spring race this year, run in the daytime, was one of the best that track has hosted in recent memory. Richmond generally produces a good show, but the daytime races have the potential to be even better. Why on earth would anyone want a race with less competition?

I don’t understand the allure of night races. They rarely produce racing that’s even close to as good as a day race on the same track, let alone better, and that aerodynamic dependence everyone professes to hate? It’s much more prevalent at night, when the track is faster and has more grip. Look at the All-Star Race last weekend: there’s a reason the Open was a more exciting race. The sun hadn’t set. It’s harder to pass and easier for cars to get strung out. Sure, the cars look pretty under the lights, and it’s cooler in the stands, but does that really balance out an inferior on-track show?

There’s no simple fix to the on-track product. Street cars are very aerodynamically stable and therefore aero dependent. But if fans want cars that look more or less like the street versions, this will always be an issue. Yes, there are areas that could be changed, and the cars can be improved to some extent.

But a lot could be done with the schedule. More short tracks and road courses, fewer intermediates and the racing would be better. Jimmie Johnson said after the all star race the intermediates put on a specific type of show.  Knowing that, perhaps the answer lies in working to reduce the number of these tracks. Which brings us to the biggest roadblock of all.

In order for there to be real change in the schedule, NASCAR needs to take the stance that Bill France took in the early days: my way or the highway. That means NASCAR needs to get tough with the track owners, chiefly Speedway Motorsports, Inc. and the France-family-owned International Speedway Corp., when it comes to the schedule. Right now, the track owners are dictating too much of it.

Moving a race shouldn’t be as simple as it seems to be now. NASCAR shouldn’t be allowing track owners to move any races to intermediate tracks from another style of track. SMI should have been made to take the second Las Vegas date from another of it’s 1.5-mile tracks, not the 1-mile flat oval at New Hampshire. No new track should be even considered as an addition to the schedule if it fits in that all-too-familiar 1.5 – 2-mile mold.

The issue here is that taking races from ISC tracks becomes a conflict of interest, and taking dates from anyone else elicits cries of foul from the owners, citing favoritism for ISC. For any meaningful change to happen, NASCAR would have to divorce itself from the interests of ISC and take a harder line with all track owners. This is how and where we race, and if you want a date, this is how it will happen.

A schedule overhaul would be a welcome change in the sport if done right. However, it would ruffle a lot of feathers, and that’s something NASCAR would have to take a tight hold on the reins for.

I wish I had read this before I left my comment on Bowles’ article. I left a comment that pretty much stated the same thing you did in #5 (the sanctioning body’s conflict of interest in owning tracks). Right on! That’s a huge problem with doing what’s best for the sport.

We seem to be in agreement on several points. I replied to your previous article before I read this article. Neat. I guess we both know our stuff

I agree with you about Richmond – it would be better as a day race, the racing overall was just better. I also like your suggestion about Talladega, that makes good sense. Indy? nope that’s just a silly move. The racing there has been terrible for years and making it the race before the playoffs/chase/whatever name they want to give it makes no sense, but whatever, this is NASCAR, they don’t have to make sense.

I agree, too, that it is an obvious problem with track ownership. NASCAR keeps saying they are trying everything – everything except one thing that might actually do the most good – fix the cars – get rid of the splitter and yes, heresy, loosen up the rules.

Put some fun back into it.

With the prevelance of the intermediate tracks what if NASCAR brought back the aero rules from say the mid-late 80’s The cars were up off the ground, had the little air dam to get air to the radiator, and seemed squirrely as hell on the bigger tracks.
The teams would essentially be spending the same money because most every team has specifically built cars for the 1.5-2 mile tracks anyway. Get air flow under the cars and aero push vernacular likely goes away and maybe the racing improves. Challenge would be in keeping many of the same rules for how the car is built but most of the issues now are body related and less chassis so should not be huge deal with all the smart engineers and personnel on these teams.

This also puts a huge percentage of impact back on the drivers where it should be. figure out the mechanical grip, figure out the communication, and the driver can drive the dickens out of the car.

Obviously most of the safety features of today need to stay in place but that might end up being the true answer to the NASCAR competition dilemma long term.

I always thought that they should make the front more boxy to cut a bigger hole in the air and bring back the slingshot. The days of wanting to be second or further back on the last lap are long gone. Like the fronts of the 79 Monte Carlos and T-birds.