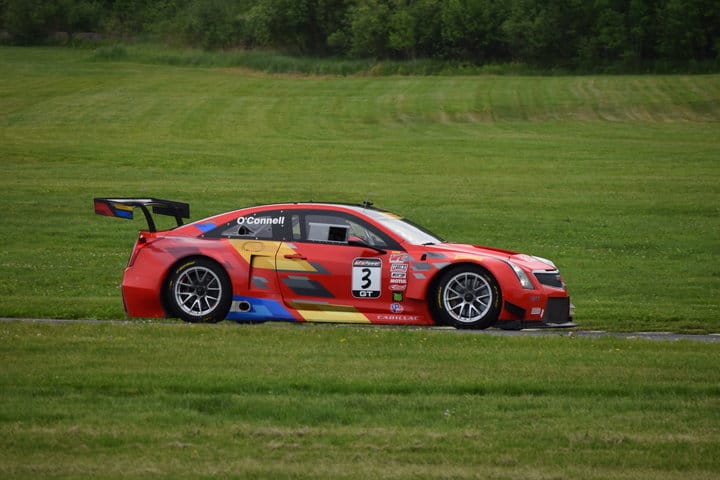 The entry lists are out for this weekend’s Pirelli World Challenge Grand Prix of Lime Rock Park, and it is quite massive.  As of the last update, 109 entries have been submitted.  As is the norm for Sprint-X weekends, some of the teams are competing in both Sprint-X races and the GTS sprint races.

The list originally had the No. 61 Ferrari 488 GT3 of Kyle Marcelli and Alex Riberas on it.  However, Riberas crashed heavily in qualifying last Friday at Canadian Tire Motorsports Park (CTMP).  The crash ended their home race weekend and required a thrash back at the shop.  Unfortunately, the team is not in the position to race this weekend.

Unfortunately our team will not be at Lime Rock due to the qualifying crash at CTMP. Good luck to all @WCRacing teams this weekend.

The GT class has had a number of driver changes for this weekend.  The race weekend runs up against the Zurich 24 Hours Nürburgring in Germany, so a number of the top drivers will not be present.  Magnus Racing signed Pierre Kaffer to drive the No. 4 Audi for the full season with advance knowledge that he could not race at Lime Rock.  As announced Tuesday, Dane Cameron will replace Kaffer alongside Spencer Pumpelly.  Andrew Davis will replace Marco Seefried for Lime Rock only in the No. 44.

Jörg Bergmeister will also in Germany this weekend.  As a result, Wright Motorsports has tapped defending FIA World Endurance Drivers’ co-champion Marc Lieb to share the No. 58 Porsche with Patrick Long.  Porsche factory driver Laurens Vanthoor is also at the Nürburgring and has been replaced by Matthew Halliday.  Finally, SuperGT veteran André Couto has replaced Alexandre Imperatori in the No. 78 Bentley alongside Yufeng Luo.

In GTS, the only change of note is that the PF Racing Ford Mustang GT4 that finished second in the first race in Canada is not entered.  In its place, VOLT Racing has entered their second McLaren 570S GT4.  Chris Hall will drive the black No. 02 while Alan Brynjolfsson will drive the chartreuse No. 077.

Due to Lime Rock Park’s short pit lane, the TC class will run their own races this weekend, separate from the TCA and TCB classes.  Having said that, a full compliment of teams (34) are entered.  Of note, 18 of the 34 cars entered are BMW M235iRs.  That includes a new team returning to the class after years away.

Lime Rock Park is Turner Motorsport’s home track and has been a place in which the team has seen a good amount of success in the past.  The Amesbury, Mass.-based team is using this weekend to debut their new BMW entries in the class.  Team owner Will Turner will drive the No. 95, while the aforementioned Cameron returns to the team for the first time since 2015 to drive the No. 96.

There are a couple of other changes of note.  2012 Continental Tire SportsCar Challenge Street Tuner co-champion Jayson Clunie will drive the No. 2 BMW M235iR for Classic BMW, replacing Gino Carini.  In addition, Randy Pobst will replace Chetan Puranik in Zima Motorsports’ No. 36 BMW.

Finally, there are not a lot of changes in the TCA and TCB classes.  S.A.C. Racing has entered a fourth TCA car for Richard Astacio that will carry the No. 080.  Also, Copeland Motorsports has two Mazda Global MX-5 Cup Cars entered this week.  The No. 97 of Brian Henderson returns after missing Canadian Tire Motorsports Park.  The TCB entries are effectively the same group that was at CTMP last weekend, minus the Believeland Motorsport No. 02 Mazda of Ted Sahley.