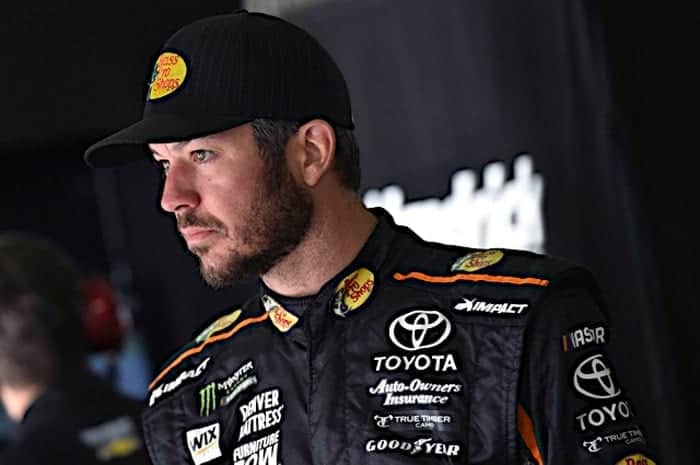 This week’s daily fantasy tackles the Monster Energy NASCAR Cup Series as they head to Charlotte Motor Speedway. One of the sport’s crown jewels, the Coca-Cola 600, will run Sunday night at 6 p.m. Cars hit the track on Thursday at 2 p.m. for first practice; Coors Light Pole Qualifying begins at 7:15.

This week’s fantasy forecast is backed by DraftKings, the No. 1 platform for Daily Fantasy Sports. You can jump in on all of the daily fantasy NASCAR action at Charlotte this weekend by signing up here for a free entry into one of this weekend’s contests. All you have to do is make a $5 deposit to get started!

Truex put on a show last Spring at Charlotte. In one of the most dominating victories in series history, he started from the pole, led all but eight laps (392 of 400), and pulled off his first win of the season.

The expectations to replicate that Sunday are at an all-time high this weekend, highlighted by his pricey salary. Truex is rock solid at 1.5-mile tracks, topping all drivers in laps led at intermediates this season. Martin has three top-five finishes in the last four Charlotte races and should run up there again despite a rocky performance in the All-Star Race.

Before losing his engine in the Charlotte playoff race last fall, Harvick was riding a nice seven race top-10 streak. That included two wins and three second-place finishes. If you dig even deeper, Harvick has only two finishes outside the top 15 here since 2010.

A 2017 win has eluded the 2014 series champion to this point in the season. But he has four top-five finishes in the last five races on the schedule, most recently a third-place finish at Kansas. Harvick is hitting his stride heading into the middle part of the season and his salary here is justified.

A 24th-place finish at Kansas ended Johnson’s four-race hot streak, one where he averaged a fifth-place finish. That included back-to-back wins at Bristol and Texas to clinch a spot in the playoffs.

It seems as though every week we talk about how Johnson is the all-time leader at a track and Charlotte is no different. The seven-time champion has the most wins in Cup history at this place with eight, once called Lowe’s Motor Speedway and nicknamed “Jimmie’s House.” He led 155 laps en route to the win last fall and is looking to do the same Sunday night.

Busch has yet to win a points-paying race at Charlotte, one of the few tracks left where he has not scored an official victory. (Remember, last weekend’s All-Star Race was technically an exhibition).

But Busch has raced well here. He has 10 top-five finishes at the track, including a sixth-place result last fall while leading laps in 18 of his 26 career starts.

He then took the broom to the track last weekend, winning both the Camping World Truck Series race and NASCAR’s All-Star main event. It’s only a matter of time before he breaks through in a race like the 600.

Logano is averaging just shy of an 11th-place finish in 16 races at Charlotte, a series best. He checked off his first win here in the 2015 playoff race in which he led 227 laps. Last season, Logano finished ninth in the spring race, and then in the fall he wrecked and finished 36th after spending half his time inside the top 10.

Since winning at Richmond three races ago, Logano has crashed out of two consecutive shows, making Charlotte the ideal spot to bounce back. The Team Penske Fords have been fast all season on 1.5-mile tracks, making Logano a legitimate threat to win Sunday.

McMurray found success at Charlotte early in his career. He won in his first ever Cup start at the track back in 2002, subbing for an injured Sterling Marlin. Since then, he has gone on to win another race (2010) and been a threat for victory several more times.

McMurray is quietly sitting fifth in the Cup point standings through 11 races. He has been the definition of consistency, notching seven top 10s, four of which came in the last five races. He was the runner-up at Talladega and has been running well. His salary is getting a little higher, but at this point this driver is still a great value play.

Dillon will head into Charlotte with a new crew chief, as Slugger Labbe left Richard Childress Racing altogether this week. A new face atop the pit box could be a welcome sign for Dillon. His 2017 campaign has not lived up to the hype following a great finish to the 2016 season. He only has one top-10 finish in 11 races and hasn’t led a lap since the Daytona 500.

A 12-car pile up ended Dillon’s fall Charlotte race last season, dropping his average finish from what would be 12.8 down to 16.0. Dillon’s average start at the track is the focus of this weekend. If this driver starts outside the top 20, he’ll be one to watch. In the three races here in which Dillon started 20th or worse, he finished 16th or better. Those are some valuable position differential points to have.

Stenhouse is here because of consistency: the No. 17 Ford has not finished outside the top 15 since week five at Fontana. The Mississippi native has been tremendous this season both on the track and on DraftKings. He has two top-five finishes in the past three races, which includes the win at Talladega that likely landed him inside the playoffs.

The two-driver crew at Roush Fenway Racing have been a bright spot in the series during the young season. Stenhouse will look to continue his hot run at Charlotte.

Suarez will be making his first MENCS start at Charlotte Sunday night. His exciting stage win to seal his spot in the All-Star Race last weekend also was a reminder of how well he ran at Charlotte in the XFINITY Series. In four XFINITY career starts at CMS, his worst finish was 12th place.

Suarez finished third in his last XFINITY start here in a race ultimately dominated by Cup peers: Kyle Larson, and winner Logano. He should finish behind those veterans again Sunday but remains a solid darkhorse pick for a top-10 finish. 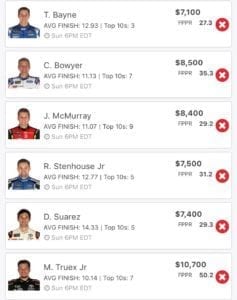