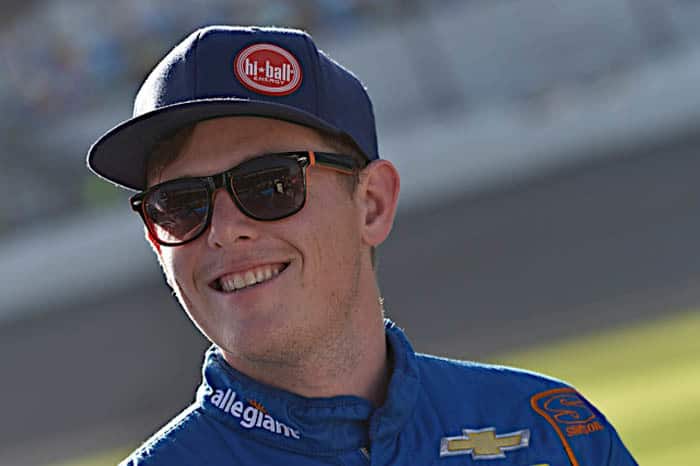 The beginning of 2017 marked a couple of firsts in the XFINITY Series for a new Chevrolet team. Spencer Gallagher entered his first full-time campaign in the top preliminary series in NASCAR, as did GMS Racing, owned by his father Maury Gallagher.

Gallagher competed in seven XFINITY Series events in 2016, placing a season-best eighth in July at Daytona International Speedway. The other six events were learning experiences for the 27-year-old.

Now, nine races into his rookie season, Gallagher is heading back to some tracks for the second time in the XFINITY Series, and other tracks where he has previous experience in the Camping World Truck Series, where he drove full-time in 2015 and ’16.

Heading into the 10th race of the season at Charlotte Motor Speedway, the No. 23 team sits 16th in the championship standings, 34 points below the playoff bubble currently nailed down by another rookie Cole Custer. For Gallagher, it is all about getting better throughout the season.

“We are kind of starting up from scratch, and obviously every time you do that and step into a series like this there are going to be a lot of challenges,” Gallagher told Frontstretch. “That’s the strength of this GMS team. We’ve met and we’re rising to and we’re getting better and better every week. I look back at the history of our truck program and we started off struggling to make races and now we’re champions. In that vein, we’re pretty far ahead from where we started.”

Coming into the season, Gallagher knew the competition would be elevated from the Truck Series. Arguably, he was hitting his stride at the tail end of his truck stint, winning two poles in the final eight events.

But moving up to the XFINITY Series is new to him and his team, so growing pains were expected.

“My expectations have not been disappointed,” he said. “This is a hard-ass series. This is big-time auto racing. You’re out here against some of the very best of the best. This is one step away from the Sunday show, so it better be hard.”

In the first nine races, Gallagher has one top-10 finish, placing 10th at Richmond International Raceway. Before finishing 39th at Talladega Superspeedway in his most recent outing, getting caught up in the Big One, the No. 23 car had a five-race streak of top-20 finishes.

However, not having the experience as some of the other XFINITY regulars, as well as an established XFINITY team, has not helped the rookie driver in his quest of a victory and making the playoffs.

“I would like to think we’ve done really well with digesting new information,” he said. “That’s something my crew chief Joey [Cohen] is fantastic at. He’s a data guy. He can draw upon every piece of data that you give him and find a plan to get a couple extra tenths out of the car.”

Not having another driver to rely upon has also hurt Gallagher. In the Truck Series, he had reigning champion Johnny Sauter, as well as Ben Kennedy and a fourth part-time truck, which was victorious with Kyle Larson and Grant Enfinger last season.

Starting this weekend at Charlotte, Kenendy will begin a 12-race schedule in a second GMS Racing car that will give Gallagher more information to debrief with a fellow driver.

“That’s something that I’m really looking forward to, precisely so that we can have two cars out there and try different stuff and bounce that stuff off each other as teammates,” Gallagher said of Kennedy. “‘I’m doing this and that and the car is doing this and that, well what about you?’ Having another person to be your sounding board, especially when you’re stuck with a tricky problem is so valuable.”

Compared to some of the bigger teams in the XFINITY Series — Joe Gibbs Racing, JR Motorsports, Team Penske, Richard Childress Racing and Roush Fenway Racing — GMS does not have the amount of people those teams have, at least at the XFINITY level. Overall, Gallagher is working with 10-15 dedicated crew members to help elevate their program.

“I like to think of our XFINITY program as an establishment,” Gallagher said. “Would it be better to have more [crew members] and be a Hendrick Motorsports or JRM in the XFINITY Series? Absolutely. You take what you got, and we’ve got great guys and you build on that.”

Not being under the same banner as a Cup Series team, nor having an affiliation with a Cup team put GMS Racing at a bit of a disadvantage. But Gallagher and his crew knew that coming in.

“It’s not the Kyle Busch Motorsports driven by Christopher Bell, no, no no, that’s the Joe Gibbs No. 18 Camry piloted by Kyle Busch over there,” Gallagher said of his competition. “That’s the Joe Gibbs Racing machine right over there. It came out of the same shop as the Cup car did. I talked with a couple people too, and apparently these XFINITY teams that are affiliated with Cup, they don’t have to necessarily do a ton of their own R&D. Apparently, a lot of the Cup stuff is carrying over pretty simply these days. That’s a huge advantage, obviously to have that R&D and lean on.”

Gallagher and GMS Racing might not have the alliance that some of the other XFINITY Series teams do, but 2017 is all about getting the growing pains out of the way, so come 2018 it’s hammer down beginning at Daytona. This season is all about building a foundation for the rookie team, as GMS continues to climb the ranks of NASCAR.