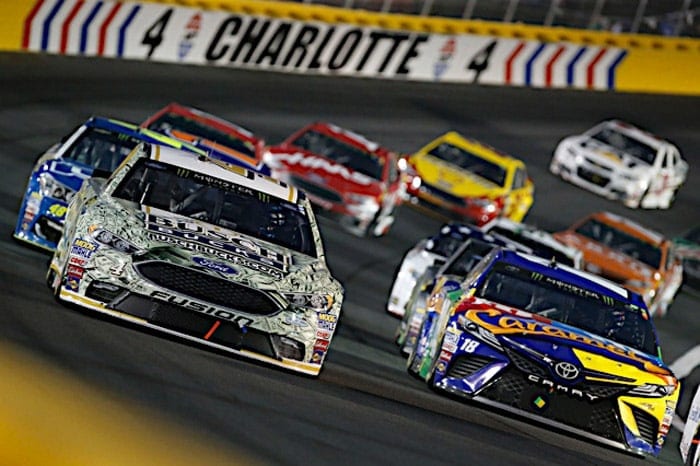 This weekend marks the annual best day in motorsports.  Sunday features three crown jewel events, beginning with the Monaco Grand Prix, followed by the Indianapolis 500 and capped by the Coca-Cola 600.  That’s a full, long and storied day of racing, yet according to people at Nielsen, only two percent of U.S. viewers will bother with all three.

In some ways that’s not surprising, as it seems like racing overkill.  It also feels like one of the two American races might be leaving something on the table by not holding their race on Monday, but that’s neither here nor there.  What Sunday should be is a time for everyone to take a moment and just enjoy some cars going fast, no matter your preference for which style.

Happiness Is… Changes.  This past weekend’s All Star activities were a reminder that while there may be a bunch of hype surrounding the events that once the green flag waves, the races often become just a typical race.  Or to use more plainspeak, the racing is nothing special and frequently boring.  Aside from watching Trevor Bayne perform a remarkable save or Erik Jones push desperation into the grass, there was little in the way of excitement.  In fact, it looked like things were going to play out as they usually do at Charlotte Motor Speedway – with Chad Knaus snookering the field and Jimmie Johnson celebrating.

So let’s give Charlotte a bit of credit for the big race this weekend.  Rather than letting their super smooth surface provide another yawner, they’ve treated the track with the same stuff applied to Bristol to give another lane more grip.  This time it’s the top lane getting the treatment in hopes that those taking the high side might be able to keep up with their counterparts on the inside.  The idea may be a good one but does seem a bit of a rushed or panic move – then again, when the attendance continues to be an issue why not give something a go.  And that’s a reason to be pleased.

And sure, some may be disappointed that Charlotte will continue to hold a spot in next year’s chase with their ‘roval’ it still represents a change from what has been status quo thinking.  So Charlotte, more than any other track, is displaying a willingness to change in the hopes of reinvigorating interest in the track and its racing.  The hope here is that other tracks follow their lead, seeking every way possible to improve the racing.

Happiness Is…Safety.  This column continues to harp on the improvements in safety regarding motorsports.  The whole adage of celebrating someone dying while driving for our entertainment with the adage that they died ‘doing what they love’ is hogwash.  These drivers love living and driving is part of it – and they’re doing it for our entertainment!  Part of that entertainment is watching them push the limits of speed and control all with the hope that they return to pit lane safely.

After the Joey Logano-Danica Patrick-Aric Almirola wreck at Kansas a few weeks ago, we were all reminded how far safety advances have come.  The importance of safety was reinforced during Indy 500 qualifying, when Sebastien Bourdais was ripping through his laps and drove his car straight into the wall in an effort to correct a spin.  The crash looked horrific upon first watch, one that would have claimed lives just ten years ago, maybe even five.  And yet, as the car settled, Bourdais could be seen raising his arm attempting to raise his visor.

Bourdais walked out of the hospital this week, on crutches, and will now work his way through pelvic and hip fractures.  But he’s walking out.  And that is wonderful.  So as these drivers get set to strap themselves this weekend, it’s good to remember the dangers, recognize the advances, and appreciate the nuttiness.

Happiness Is…Sunday.  As long as the Monaco-Indy-600 trifecta continues to exist, this feeling of joy will remain.  This Sunday is racing at its finest.  Sure, Formula 1 features better tracks in regard to what could be considered competitive racing, but it’s hard to argue against the scenery.  There’s nothing like watching the drivers stream by the pool or past the yachts in the harbor, it’s just such a intriguing backdrop.  Then there’s the 500, with its history, its presence, its draw.  Fernando Alonso may be grabbing headlines for the race, but one of the bigger storylines is that speeds are up this year at Indy – because lapping in the mid 220s should be commonplace.  The continued battle between Honda and Chevrolet will also feature prominently.  And then there’s the question of the resin applied to the track in Charlotte will have any influence, or the stages, or can the aero issues plaguing the series be mitigated.  Whatever the storylines may be, enjoy whatever racing you can, it’s all fun in the end.

Its definitely a day where a fan can get his fill of motorsports. To me Monaco is the perfect way to start. Beautiful scenery, pagentry, the best announcers in the business, and of course the most advanced race cars on earth. All as you sip your coffee. The perfect start to the day. After that it becomes a bit more workmanlike. But to each their own.

Finally I’m a 2%er. If your in a biker gang it means your leathal. If your talking wealth, you help run (destroy) the country. But if it’s racing, you pledge to try and grow roots into your couch by watching over 1200 miles of racing. Confession though, i normally fall asleep during the end of the Coke 600. Better than the wave machine my wife has.

Two of the three will be real races with real “race” cars!

Yes Huston, characterizing the Monster Energy NASCAR Cup Series Coca-Cola 600 as a Crown Jewel of racing seems a bit of a stretch to me. Count me in for the real races with real race cars. It’s shaping up to be a great race day. Go Vettell and Alonso!!

how about two Crown Jewels and one Brown Stool