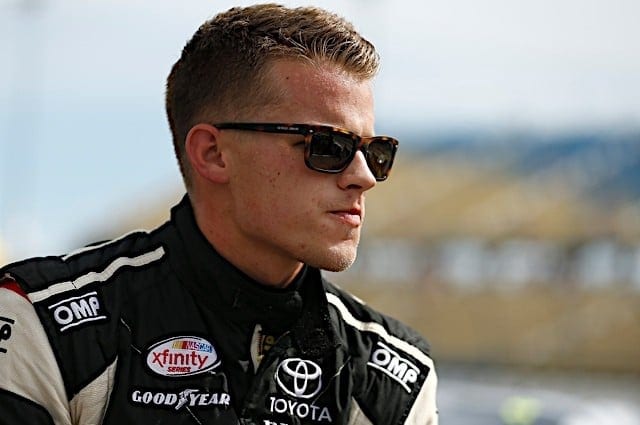 Well, this sure hasn’t happened lately.

For the first time since toward the beginning point of the 2017 NASCAR XFINITY Series season, there are quite a few new faces filling out the entry list for this weekend’s race at Charlotte Motor Speedway.

Not that the series has been hurting for different blood. In each race since the season-opening event at Daytona International Speedway, at least one new driver has joined the series’ ranks for 2017. Most recently, that included Ben Kennedy, who made his season debut at Talladega Superspeedway in the No. 2 and looks to race again on Saturday, this time for GMS Racing.

But as the series heads home to Charlotte this weekend, four different drivers plan to make their season debuts — and two of them take it a step further as complete XFINITY newbies, having never started a race in the series. At least one of them has a guaranteed spot in the show.

That’s a fairly hefty group to keep track of if you’re a casual observer of the XFINITY Series, but don’t worry, we’ve got you covered. And it’s not like anyone listed below is new to NASCAR as a whole, anyway.

You’ll be fine. But use this cheat sheet anyway.

If one driver makes his XFINITY debut Saturday night, it’s Christopher Bell. Why? Check out the number: No. 18, one of Joe Gibbs Racing’s elite automobiles that is often piloted by a Monster Energy NASCAR Cup Series regular. This time around, Bell gets the nod; think shades of Kyle Benjamin, who debuted with JGR earlier this season and will continue to pop up intermittently in 2017.

Bell is no stranger to you if you’ve been following the Camping World Truck Series the last two seasons. He made quite the splash at Eldora Speedway in 2015, winning in just his third start for Kyle Busch Motorsports. He’s since rattled off a victory in each of the three seasons in which he has participated and concluded the 2016 season third in points.

As it stands, Bell is second in the 2017 Truck Series standings in his second season in the No. 4 that Erik Jones drove to a title in 2015. He also hasn’t finished outside the top 10 all year and only ranked outside the top five once. Not that that’ll most definitely, without a shadow of a doubt translate to a great run in his XFINITY debut, of course.

But… KBM star driving for Gibbs? I like the odds.

Blast from the past… sort of. If you’re completely new to NASCAR or even started watching in 2016, Cale Conley’s name is likely unfamiliar. But the 25-year-old has 41 career starts in the XFINITY Series, so Charlotte is far from his first rodeo.

Here’s the haps: in 2014, Conley rose to the series as a part-time pilot of Richard Childress Racing’s No. 33. It mostly did not go amazingly, with just one top-10 finish in 11 races — and in prime equipment, no less. That underwhelming performance still led to a full-time ride for 2015, except this time it was with TriStar Motorsports and its No. 14 machine. That lasted 30 races before Conley was replaced for the final three events, having recorded no top 10s all year and just a 25.3 average finish.

He hadn’t been seen in NASCAR’s national series until now, stepping into JGL Racing’s No. 24 for the race this weekend. He’s the latest in JGL’s Young Guns program, and though no further races have been announced, the team revealed in the press release confirming Conley’s addition that it’s working on more events for the West Virginia native.

Like Bell, Austin Wayne Self is a graduate of the Truck Series. Unlike Bell, he may not have a guaranteed spot in the show.

Still, this weekend marks Self’s maiden voyage into the XFINITY garage, having competed in the Truck Series since 2016. The Texan finished 15th in the standings last year, scoring one top-10 finish. That’s the same amount of top 10s as he has through 2017 so far, even though he’s had to cut back his schedule, neglecting to run the second event of the season at Atlanta Motor Speedway. Regardless, he does have a runner-up finish to his name this year at Daytona.

Self’s series debut attempt comes with MBM Motorsports and its No. 40, which has shown up to each race so far in 2017 and has made every race — no small feat for the Carl Long-owned operation. Assuming Self qualifies the car in or at least attains a provisional, he’ll join Bell as a driver making their XFINITY debut in 2017, along with the likes of Benjamin.

Aha, there’s the name you recognize. Todd Bodine has been around the NASCAR garage for a few decades at this point, first starting an XFINITY event way back in 1986. He’s racked up 241 starts in the Cup Series, 332 in XFINITY and 220 in Trucks, with 15 XFINITY wins and 22 Truck wins to his resume, along with a pair of Truck titles.

Since 2013, Bodine has been less of a fixture on either circuit, often appearing in the broadcast booth or as part of NASCAR-related TV shows. But he’ll still show up on occasion in XFINITY especially, having started one race in 2016: the No. 90 at Watkins Glen International, finishing 34th.

This time around, Bodine links up with SS-Green Light Racing, driving the team’s No. 07 that’s been occupied by Ray Black Jr. since the beginning of 2016. Black steps out of the ride due to lack of sponsorship, though he is expected to return to the seat pending new sponsorship in the future.