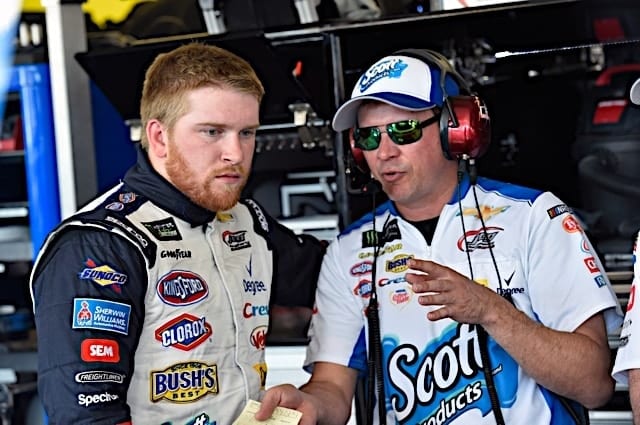 Trent Owens, crew chief for Chris Buescher, had the opportunity to take a second driver to the All-Star Race last weekend. Similar to his last experience, running a JTG Daugherty Racing entry limited his opportunities since the small organization does not have a fleet of cars and therefore risks destroying one while going for the victory in the All-Star Race.

It ended up being a much-needed test session for the team that afforded it the option to test some things it normally would not have the time to experiment with on the Coca-Cola 600 race weekend.

In this week’s Tech Talk, Owens touches base on the option tire, pit stops during qualifying for the All-Star Race and driver comfort for the 600 versus the sprint race last weekend. He also analyzes why the transition from day to night isn’t what it used to be, the greater strength and durability of modern bump stops and shims, along with how they will attack the VHT that has been applied to the high line.

Mike Neff – You got to experience the All-Star Race as a crew chief for the second time in your career. What was it like going through it with Chris Buescher this time?

Trent Owens – It was OK. For one, it is fun to be a part of that event. When you have to run then Open and you don’t advance, you feel bad. To be in the All-Star event is fun and the energy of the event is great.

[But] for a team like ours, it is tough. We don’t really have the racecars to waste in a non-points race. We kind of used it more to get some laps and get some items in the car that we may not have time to do during the 600 event this weekend. And really to test. We don’t get to test a lot. Other than the excitement of being in the event itself, it is really is more about getting laps and trying some things that we normally wouldn’t be able to do.

Neff – What was it like calling the race with that new option tire?

Owens – I am a big fan of having a softer compound to use as you choose. It wasn’t a huge difference. I think they need to look at tweaking that some to make the speed difference a little bigger than it was. It did give you grip for about 10 laps and then fell off a little harder than the other tire. We ran practice by ourselves and it was a good four or five tenths faster on the stopwatch, but in traffic it kind of evened itself out, and it didn’t really lend itself to being able to pass with ease.

Neff – How was the pit stop experience for the No. 37 team?

Owens – It is very much different from our normal weekends. The driver can run as fast as they want down pit road with no speed limit. Chris was probably a lot more nervous than the pit crew and myself; they can’t go over the wall until he comes to a complete stop. It is just a little added feature of that event that I think is great. It makes qualifying fun to watch, not only for the fans but for the race teams as well. It gets the pit crews involved and just makes it fun.

I thought Chris did really well, especially for his first time. As young as he is, he’s always had a speed limit. I think it is fun and I think they need to keep that format for qualifying.

Neff – You grew up around this sport when no speed limit on pit road was the norm. Can you fathom that they used to let those guys come down pit lane as fast as they used to?

Owens – I can remember being in the pits and stuff when I was young. I didn’t really think twice about it. Now the crews have to wear firesuits and helmets. We’ve seen a couple accidents over the years, and we’ve now gotten used to seeing the speed limit. What a great thing that is.

I can’t believe, in reality, that it was ever the other way. While me and the rest of the garage were right on pit road in those days, you didn’t think anything about it because that was how it was. Definitely scary to think about it now with pit crews out on pit lane with cars going behind them at 150 mph without the crew guys even wearing a helmet.

Neff – When you go to 100-lap segments this weekend and will probably have some full fuel runs, what do you have to take into account, not only from air conditioning and air circulation, but also comfort from the ease of the ride and reducing the abuse on his body while still getting speed out of the car?

Owens – All-Star weekend, you’re running 20-lap segments at most. Charlotte’s race surface does have bumps. It is not the smoothest by any means. We get there on All-Star weekend [and] it is all about speed. We know we’ll get a guaranteed caution in 20 laps and the driver can recover so we don’t worry at all about the quality of the ride. We really try to get the platform under the car as best as it can be.

When we go back for the 600, ride quality really is a concern over the bumps. To run 600 miles is a stretch on the engines; we have mileage limits on the engines. The same thing with the drivers as well, they kind of get mileaged out too if the car is riding too rough. It is a tough thing to accomplish. You’ve got to achieve a similar attitude once the car has traveled by using a softer suspension. It is a little more difficult when we go over there for the 600 weekend to get the comfort in the car.

If your driver is bouncing around and his head is bouncing off of the head rest because the car is real rigid, he’s probably not going to fare too well by the end of the race.

Neff – With the tight tolerances that you have, the low ride height and the hard tires you are still running, is the transition from day to night as dramatic as it used to be when you had a little more flexibility in your setup?

Owens – I don’t think it is as dramatic as it once was, for sure. I think a lot of that is managed by the ride height rule. We can set our frame heights where we want them at the start of the race, so to speak. We build a little more adjustment into the cars, as far as spring rubbers and packer shims, for the change.

I’m pretty sure most crew chiefs, including myself, concentrate on setting our cars up for the night. We try to manage when the race starts during the day. I’ve only done the 600 since 2014, and that was the first year for the dropped frame heights. I can’t really speak on the years before that, whether that had anything to do with it, but I’m thinking it has. I haven’t seen where the transition from evening to late night has been that dramatic.

Neff – A lot of fans might not think about the fact that the loads on the car going through the corners, over and over again for 400 laps, will result in the bump stops and shims breaking down. Do you have to plan on that deterioration in advance?

Owens – I think when the range of bump stops was made out of neoprene or plastic, you probably had to worry about that much more than now. NASCAR allows us to use metallic bump stops. Essentially, that is a spring on the chassis side. And we also have an actual spring on the shock that we utilize as a bump stop. Now that we’ve gone to metallic type bump stops, and we run metallic packer shims as well, that stuff seems to hold up pretty well.

Neff – NASCAR is putting VHT in the top groove at Charlotte to help improve the grip up there and make it more inviting. Is that something that, as you head to the weekend, you immediately consider heading up there, or is it something that will draw you up there earlier in the event since you know it is up there?

Owens – We’ll just play it how we see it. I’m not going to tell Chris to be the first one to try the top side. If we all have to guess, [Kyle] Larson will probably be the first one up there. They had to do something to help that. Last weekend was the first time I can remember a race at Charlotte where the top never came in at all. There was definitely something going on last weekend, and it was a concern for the teams and the drivers as we head into this weekend.

I’m for it; I think it is worth a shot. We’ve seen good luck out of it at Bristol. My only fear is that the top now becomes the preferred groove. If it lasts the whole race, I don’t know if we’ve helped ourselves that much.

Neff – 500 laps around Bristol is a lot of wear on the VHT, but you aren’t carrying the speeds or the lateral Gs that you are at Charlotte. Do you feel like you’ll end up wearing the VHT off of the track faster at Charlotte thanks to the speeds and loads?

Owens – I don’t know what the chemical makeup of the VHT is and how it may or may not be any different between concrete and asphalt. Definitely a little bit of concern of how the VHT, with the speeds we carry through the corner and the different tire compound, how that is going to hold up and sustain through the 600 miles.

Neff – You qualify on Thursday and don’t hit the track again until Saturday. Would you rather qualify on Saturday than have that long to think about things?

Owens – I like to be able to just to race practice on Saturday. Even when we qualify on Friday, this week it is Thursday, I like to be able to have some track time in and then go home or to the hotel and think about we may be able to do to make the car better in race trim when we get our practices on the next day. I know it helps me just to think about it. In the future the schedule is going to move away from that completely. Right now it doesn’t bother me. When they start shortening the schedule up we’ll just have to deal with it.