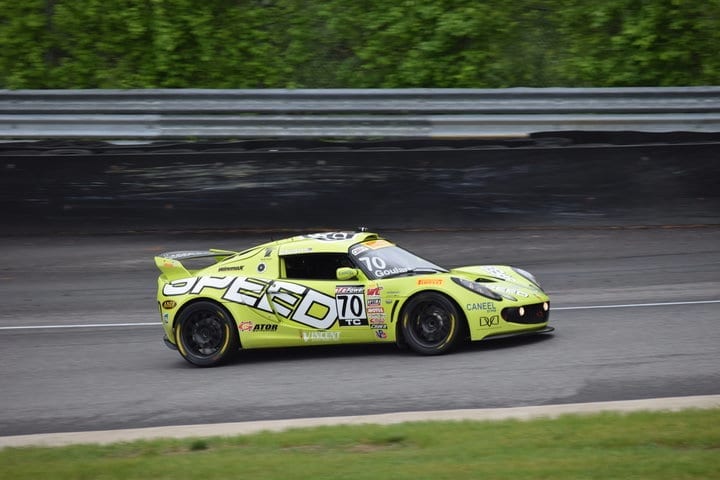 In Pirelli World Challenge, Elivan Goulart is known as a standout in the TCA class.  He’s a tough out in a Mazda MX-5.  Two weeks ago, an opportunity arose to drive KRUGSPEED’s No. 70 Lotus Exige for the TC races at Lime Rock.  The Shelton, Conn. native qualified third, then took advantage of a bad start by polesitter Paul Holton to take the lead in Big Bend.

From there, the race consisted of a duel between the two veteran racers.  Holton would try and try and try, but he could never get his Audi RS3 LMS Club Sport alongside the nimble Lotus.  On the final lap, Holton once again made a run, but could not prevent Goulart from taking his first career TC win.

Goulart was pleased with his performance.

“[Lime Rock] is the perfect track for the Lotus since its light and nimble,” Goulart said in the post-race press conference.  “The Audi is obviously fast as well; we both have our strengths and weaknesses.  Getting up front quickly was crucial and very beneficial.  I definitely felt [Holton] on me.  [His car is] twice as big as mine.”

Holton tried everything he could think of to get past Goulart, but simply couldn’t do it.

“I tried to put the pressure on him late in the event,” Holton said after the race.  “I tried inside and flashing the lights too.  But he didn’t make a mistake. It’s tough to pass here and he drove a great race.  I thought I had a shot at him coming down the downhill, but the Lotus really comes off the corner well. It was a fun race for us.”

Outside of the battle for the lead, the race will likely be best remembered for a series of unusual incidents exiting Big Bend.  Just after Goulart was able to get the lead away from Holton, Samantha Tan spun and slid across the grass.  Where Tan went off, there is no Armco barrier since nearly no one actually crashes there.  However, overnight rains made the grass a skating rink.  As a result, Tan slid and nearly went into the woods.  Her BMW M235iR ended up getting stuck in tall grass, necessitating a full course caution.  She would continue after literally being pulled out of the weeds, but finished three laps down in 25th.

Later on in the race, Winding Road Team TFB’s Jacob Ruud spun his BMW in the same place and ended up stuck in the tall grass.  Another caution was necessary to extricate Ruud’s car.  Finally, Honda Ste-Rose Racing’s Karl Wittmer went straight off at the exit of Big Bend and nosed into a bush.  That incident did not draw a caution as it would have led to the race finishing under yellow.