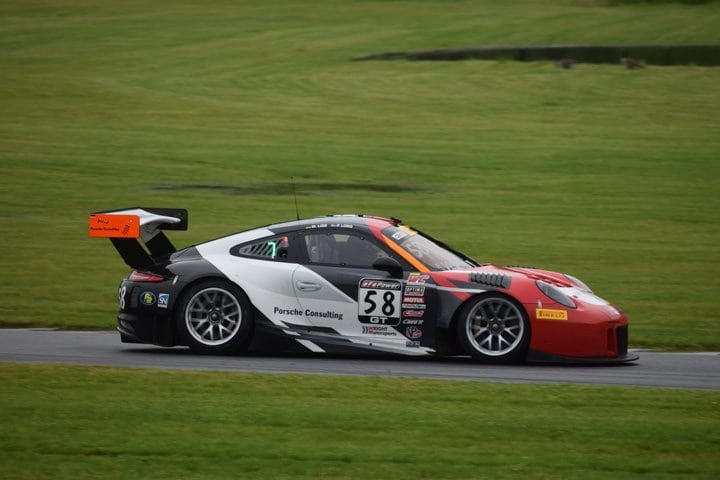 The changeable weather conditions at Lime Rock Park shifted toward the wet side when the Sprint-X teams were scheduled to qualify on Friday.  A heavy mist forced teams to switch to rain tires in the time leading up to the session.

The best times changed continuously through the short session, but Patrick Long ended up on top when the dust settled.  Long’s lap of 57.649 seconds (92.047 mph) was only 14 thousandths of a second quicker than CRP Racing’s Daniel Morad.  Magnus Racing’s Spencer Pumpelly will start third, followed by RealTime Racing’s Ryan Eversley.  Cadillac Racing’s Michael Cooper actually tied Eversley on time, but will line up fifth for the race.

In the GT Pro-Am division, Always Evolving Racing/AIM Autosport’s Frankie Montecalvo was quickest with a lap of 58.606 seconds (90.544 mph), good enough for tenth overall.  Montecalvo was eight-hundredths of a second faster than Wright Motorsports’ Michael Schein in the No. 16 Porsche.  GMG Racing’s James Sofronas was third in class, followed by Tim Pappas and Yufeng Luo.  In the Am-Am division, NGT Motorsport’s Tyler McQuarrie was fastest with a time of 59.724 seconds (88.849 mph), one-eighth of a second quicker than The Racers Group’s Kris Wilson.

Sprint-X Race No. 1 from Lime Rock Park is scheduled to go green at 3:55 p.m.  The grid for Race No. 2 on Saturday will be set by the fastest times in Race No. 1