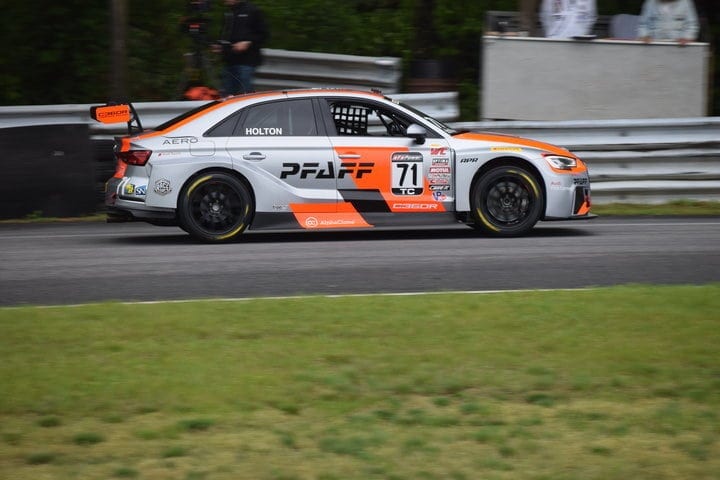 C360R’s Paul Holton dealt with the misty conditions on Friday morning to claim the TC class pole for Race No. 1 in his Audi RS3 LMS Club Spot.  Holton’s lap of 56.099 seconds (98.184 mph) was more than a full second faster than the class qualifying record from last year.

Holton’s lap was a full one-third of a second faster than RacerInk Motorsports’ Cody Ellsworth in the lone Porsche Cayman in the class.  Elivan Goulart, a late addition to the entry list in a third KRUGSPEED Lotus Exige, will start third.  Goulart was a hundredth of a second quicker than Turner Motorsport’s Dane Cameron in the fastest of the 18 BMW M235iR chassis entered this weekend.  John Weisberg, who was fastest in practice, will start fifth.

The TCA/TCB qualifying session was marked by a series of off-course excursions.  First, Blake Thompson went straight at turn 3 and splashed through some standing water in the grassy runoff.  He nearly nosed into the ARMCO barrier, but managed to avoid.  Shortly afterwards, Travis Washay effectively duplicated the feat in his MINI Cooper.

Steve Streimer spun out his No. 21 Mazda MX-5 in turn 3 as well. However, the car was not damaged and Streimer was able to continue.  Finally, Richard Astacio spun and backed into the wall entering turn 1.  That incident brought a red flag and cost Astacio his best lap.

In and around all of these incidents, Goulart still managed to top the charts.  Driving his regular No. 70 S.A.C. Racing Mazda Global MX-5 Cup Car, Goulart set a lap of 59.322 seconds (92.849 mph) to win the pole for the first TCA/TCB race.

Goulart’s lap was .142 of a second faster than teammate Matthew Fassnacht in an older Mazda.  Dean Copeland was third in TCA with another Mazda Global MX-5 Cup Car, followed by the older MX-5 of Eric Powell.  Shea Racing’s Tom O’Gorman was fifth in class in the best non-Mazda.

TCB saw Tech Sport Racing’s Canaan O’Connell (son of Cadillac Racing’s Johnny O’Connell) win the class pole with a lap of 64.759 seconds (85.054 mph) in his Chevrolet Sonic.  That lap was 1.26 seconds faster than Washay after his aforementioned off-course excursion.  Jake Pipal was third fastest in his Honda Fit, followed by Taylor Handwerk and P.J. Groenke.