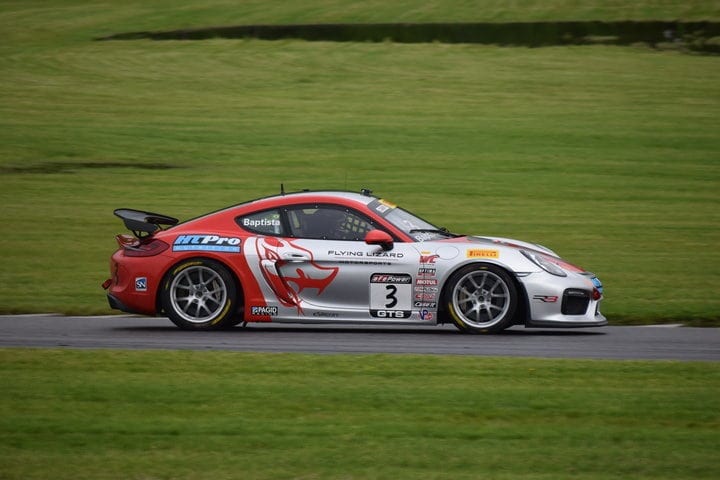 On Friday afternoon, Flying Lizard Motorsports’ Rodrigo Baptista took advantage of lapped traffic to get past Team Panoz Racing’s Ian James.  From there, Baptista held off a series of charges from James to claim his first career GTS victory by a mere .176 of a second.

Afterwards, Baptista was quite pleased in the post-race press conference.

For James, Friday was a missed opportunity to get the Panoz Avezzano GT its maiden victory.  Regardless, he’s pretty pleased with the result.

“Today, I made a good start and got in the lead,” James said after the race.  “Then Rodrigo got a good run on me and got around me on one of the chicanes. It and took me a while to get the momentum back and then I got on his tail there near the end. It was a good battle and we were side-by-side down in the last corner. The GTS races are really fun. At just 50 minutes they’re fun, it’s good racing, and you can really go after it. The races are close with all these different cars racing against each other. I’m really enjoying the Pirelli World Challenge.”

James stated that had there not been a second race on Saturday, he would have made the move to the outside of Baptista at the Diving Turn on the final lap.  What would have happened afterwards is anyone’s guess.

Baptista’s Flying Lizard Motorsports teammate Nate Stacy finished third, over 25 seconds behind.  During the race, Stacy was hit in the passenger door in the chicane by Case-It Racing’s Cameron Cassels.  Cassels spun out his Porsche Cayman GT4 Clubsport MR while Stacy took to the grass.

Mark Klenin finished fourth overall in his Tender Belly-sponsored McLaren 570S GT4.  The run was not only his best finish of the season, but it also gave him the GTSA class victory.  Points leader Lawson Aschenbach was fifth.

The race was originally scheduled for 50 minutes in length, but a rain shower after the cars had already gone to the grid on slick tires led to the start being delayed.  As a result, the length of the race was cut to 40 minutes due to a local noise ordinance that bans cars on-track after 6 p.m.

Pole sitter Martin Barkey ended up finishing a lap down in seventh after struggling with handling issues on his KTM X-Bow GT4.  However, on the penultimate lap of the race, Barkey set the fastest time of the race (58.522 seconds, 90.674 mph).  As a result, he will start on pole for GTS Race No. 2.  That race is scheduled to start at 2:50 p.m. on Saturday.