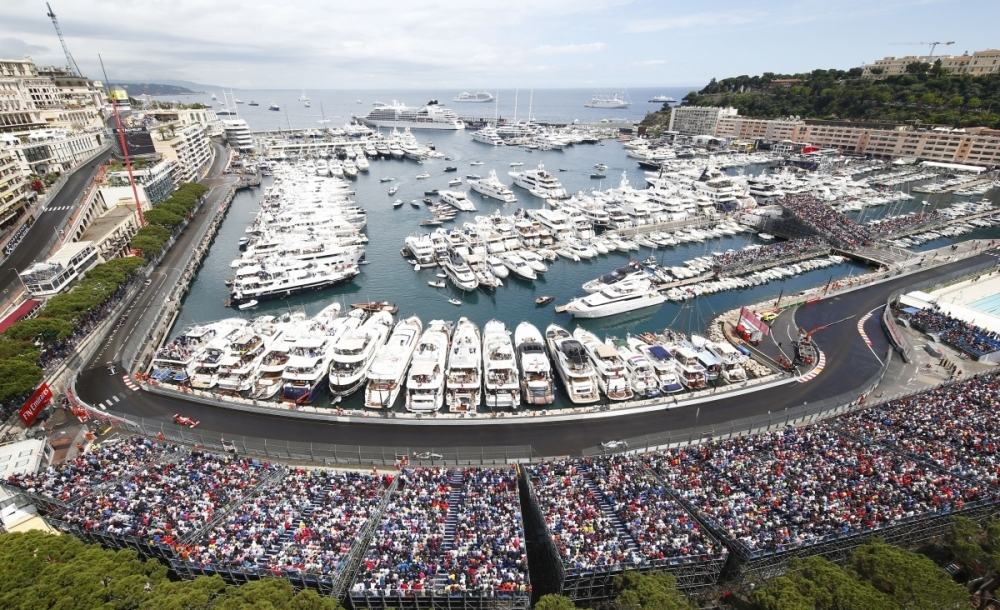 This weekend is the annual return to Monaco for Formula 1.  In some ways, the race is a bit of a stay-at-home affair, as many of the drivers and team principals have residences in the area.  In fact, when Nico Rosberg finished the race last year, he reportedly walked home after his disappointing finish.  He may have left the sport, but he is indicative of the propensity of those involved to maintain homes in the area, usually for tax purposes.

While the streets and surroundings may feel hospitable and comfortable, the new car is challenging the drivers on the course in a way that may have not been anticipated.  As the width of the wheelbase of the cars has grown by almost 8 inches with this year’s car, the narrow street course of Monaco demonstrates how close these drivers can push things.  That is to say that the common lines around the track still work, but drivers are now scraping the walls with a regularity that appears almost normal.  The hope of squeezing everything out of the car and using as much of the track as possible manifests itself in the drivers clipping the curbs and brushing the barriers on many of the turns.

For Mercedes, with its longer wheelbase, this track may show itself to be particularly inhospitable.  Of course, Mercedes also has the engineering backing to make the adjustments needed to ensure it’s able to show speed, while a team like Sauber might not be able, first, to gather data, and second, have the budget to employ what it’d very much like to.  As usual, the races remain a mixture of speed, engineering, driving ability and a show of resources.

The teams that have been unable to match the horsepower that sits atop the grid have an excellent chance to score championship points at Monaco because of the very nature of the track, where handling can overcome the deficit.  That’s a reason to watch Red Bull and Force India.

While the Grand Prix de Monaco often features little passing, this race should be rather entertaining and a departure from what has been common.  Overtaking could, and likely will, come because of attrition or slight driver errors.  Nipping the barriers may be in tolerance but a nip too far and things could go from a slow correction to a spin to a retirement.

– One of the fun stories accompanying this race is that Jenson Button returns to the fold to take the seat vacated by Fernando Alonso running the Indianapolis 500.  While much of the news cycle has focused on Alonso, and perhaps rightly so, Button’s one-race return should is also significant.

Though he’ll be driving the middling McLaren, Button’s performance can be beneficial in a number of ways.  To start, Button will serve as a veteran driver to shake down the car and possibly (likely) provide feedback that Stoffel Vandoorne may not.  Any time a team can get someone of Button’s ilk to give his thoughts on the car’s performance, it’s a win.  Sure, Button may not have been at his apex of skill during his last season with the team, but the data they might glean from his performance offers further assistance in attempting to improve.

Third, with Button joining the ranks, he makes for a fourth driver to have one at Monaco, complementing Lewis Hamilton, Sebastian Vettel and Kimi Raikkonen.  Experience can be a wonderful tool.  Finally, this race gives fans one last opportunity to say adieu to the affable British driver – those type of moments don’t come along often.

– On the silly side of the sport, Haas-F1 will be debuting its new livery this race.  The big change is the removal of the red coloring around the nose as well as the shift from the red Haas logo to a white one.  The reason for the change, according to the team, was that it wanted the logo to stand out better on race broadcasts and felt that its previous livery wasn’t quite doing the job.

While you are free to criticize as you like, the changes have brought a chorus of raspberries, claiming that the color scheme is bland and that the logos don’t pop as its intention stated.  The fact that the Haas team felt the need to make a statement defending the switch is downright comical.  We’ve reached a point where the livery is apparently as much of a story as their brake issues or aerodynamic upgrades – which means that surely questioning Romain Grosjean’s haircut is next.

– Going further into the abyss of silliness, we have Force India’s reprimand for the way its numbers were displayed on their cars at the Spanish Grand Prix.  The sporting body has asked that the numbers be moved and be of a certain size, but Force India hadn’t made this change yet.  Their cars went through scrutineering three times and passed.  Only after the race did the scrutineers go after the team, a penalty that has resulted in a fine that is on probation, meaning the team must make the changes or else.

The problem that FI has is not that they were outside of the regulations but as to how cars can pass scrutineering three times and then be found to be outside of the rules.  The team feels a dangerous precedent is being set in that the governing body will now have the ability to go after teams for other infractions in a post-scrutineering manner, opening up their power of authority to be infallible – allowing them to overlook issues and then be self-correcting at the expense of the teams.  This story seems like a trivial one that will be worth following.

– During free practice one, Lewis Hamilton recorded the fastest lap ever on the Monaco circuit.  His time of 1’13.425  stood as the fastest until FP2.  Quick assumption would posit that Hamilton bested his mark but instead Sebastian Vettel had overtaken the record with a time of 1’12.720.  While Ferrari and Mercedes have been duking it out all season, often topping one another in practices and race results, this session proved to be a bit different.  For rather than Hamilton or teammate Valtteri Bottas hovering around Vettel and Kimi Raikkonen, they were instead lagging a good bit behind, claiming the eighth and 10th spots, respectively.

Whatever gains Ferrari and Red Bull made going into FP2, Mercedes made an opposite move, something that the team acknowledge cost them the session.  This result is surprising for the Silver Arrows.  For the past three years the team has held sway and made surefire moves, showing their strength in pervasive consistency.  To have them struggle as they did would appear to be an indication of the pressure the team feels and the threat that Ferrari, and in Monaco, Red Bull, will be.  Thus far Mercedes have been able to come back strong during qualifying which should make the session all the more entertaining.

– Just not his year.  Rookie Williams driver Lance Stroll continues to confirm the suspicions that many had about the young driver moving to F1 too quickly.  His dad’s fashion empire may have been the financial backing needed to get him the ride but Stroll’s driving ability is showing itself to be a problem as he has finished just one race thus far and has had a habit of tearing up cars, even in practice.  The Monaco course has challenged everyone thus far but Stroll again wrecked a car during the practice sessions.  It is a wonder if Stroll, even with the backing, will be able to continue for the team if he keeps ringing up expensive tabs throughout the season.

The Monaco Grand Prix began in 1929 and has been a staple of the auto racing schedule.  Its contiguous streak reaches back to 1955, and though the track has undergone some slight revisions over the years, it has pretty much stayed the same.  It’s a 78-lap affair that features 19 turns and is just over 2 miles in length on the winding streets of the city.  Oddly enough, the race is one of the shortest in distance on the schedule and doesn’t conform to the distance required for other tracks.  Ayrton Senna leads all drivers with six wins, though Graham Hill with five was considered Mr. Monaco.  Hamilton earned the second Monaco win of his career in 2016 when Red Bull and Daniel Ricciardo botched their pit stop and gifted the lead, and the win.

Thought the Ferrari’s had a clear advantage till Q3. Bottas mad huge gains and probably should be on the front row. Will be at least mildly surprised if Ferrari isn’t able to snatch defeat from the jaws of victory tomorrow.