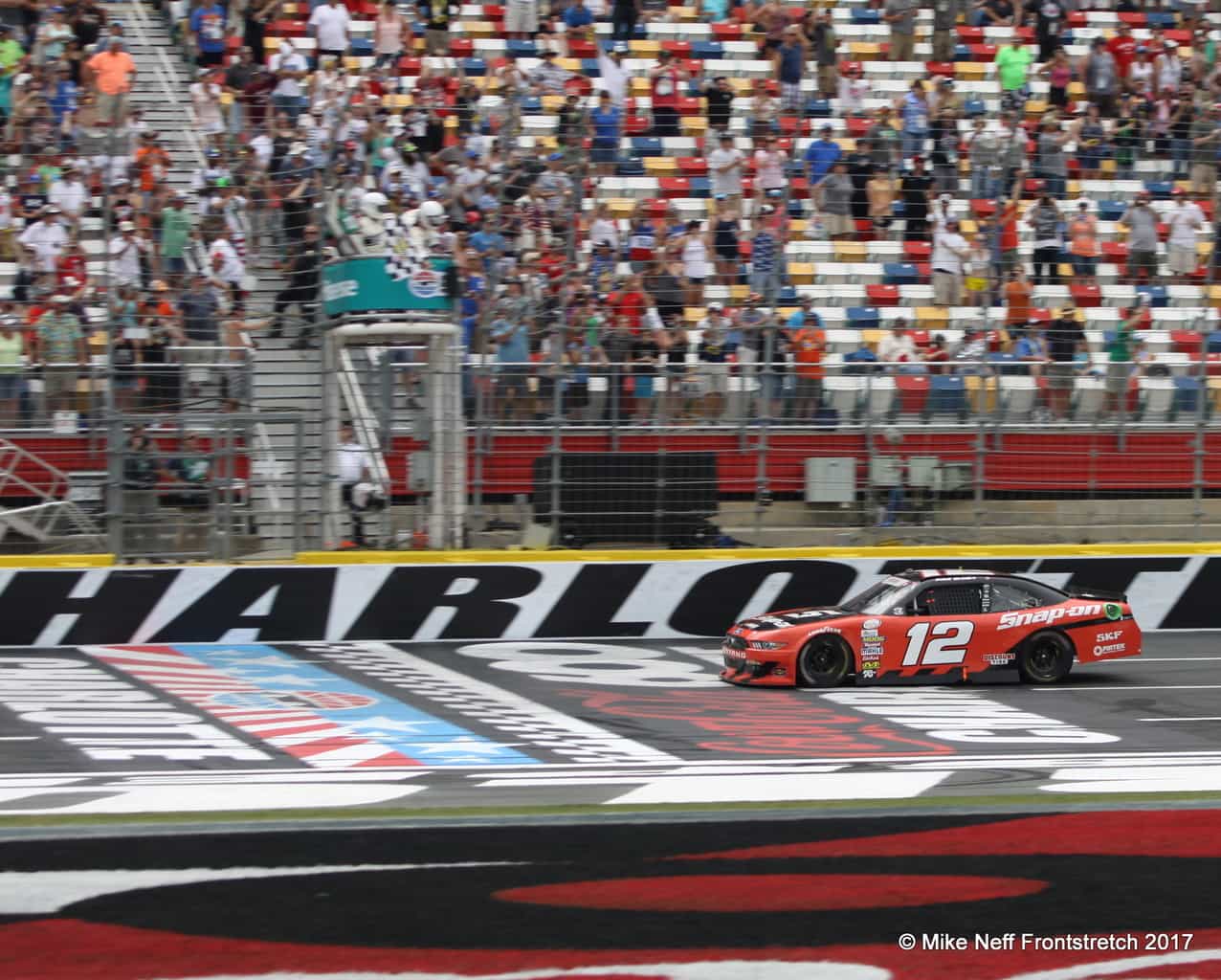 Ryan Blaney may have fired off a warning shot.  Not long after posting the second-fastest lap in Monster Energy NASCAR Cup Series final practice, Blaney won the NASCAR XFINITY Series Hisense 4K TV 300 at Charlotte Motor Speedway on Saturday in convincing fashion, leading 107 of 200 laps in a caution-filled event to outduel Kevin Harvick for the win.

Blaney started the race at the tail of the field after unapproved adjustments prior to the race.

With eight Cup Series drivers in the field, the XFINITY Series teams had their work cut out for them. Bell led the charge despite an early spin, coming back to finish fourth after his eventful start. After Brad Keselowski in sixth, the rest of the top 10 was comprised of series regulars Cole Custer, Brennan Poole, Brendan Gaughan and Tyler Reddick.

The green flag flew for polesitter Justin Allgaier, who battled through Turns 1 and 2 with Austin Dillon.  Allgaier got the lead, and Dillon got a penalty for jumping the start.

Before Dillon could serve his pass-through for the start violation, Daniel Hemric brushed the wall, and when a few drivers moved down the track to get by, Ryan Reed got into the left rear corner of Bell, who made his series debut this week.  Bell slid through the grass to bring out the first caution of the day.

Harvick took the lead on the restart, but it didn’t last long as Cale Conley cut a tire and went for a spin.  Harvick kept the point through one more caution for a Carl Long brush with the wall, and it was all his No. 41 from there in out in the first stage.

After Harvick took Stage 1, Blaney took over for Stage 2.  Unlike the first stage which saw three cautions in the first 21 laps, the second stage had that green-flag feeling.  The next time the caution flew, it was after the stage checkers for Blaney.

The final 110-lap stage was not without incident, though.  Blaney got the lead on the restart, while Darrell Wallace Jr. made a power play behind him to move up to second.  The field didn’t have long to get comfortable, though, as Spencer Gallagher went sliding across the track, bringing out the yellow for a sixth time, setting up a fight for the lead between friends as Wallace and Blaney duked it out.  Wallace led a handful of laps before Blaney took the top spot back, until Brandon Jones became the seventh caution with a spin.

Blaney kept the top spot under caution and again had the field covered, but his momentum was derailed by the next caution for Brennan Poole’s brush with the wall.  This caution set up the final round of pit stops for the field.  Austin Dillon took full advantage, grabbing the lead off pit road for the run to the finish.

Dillon held point for 20 laps, surviving a spin by Brendan Gaughan and the caution that followed, the ninth of the day.  With tire allotments exhausted, most teams elected to stay on track.  A three-way battle for the lead among Dillon, Blaney and Harvick was cut short by Michael Annett’s contact with the outside wall.  Kevin Harvick grabbed the lead, but the race was far from over.

The green flag was no sooner in the air after Annett’s crash than the yellow replaced it once again as Brendan Gaughan went for a ride across the track in Turn 2. Gaughan had struggled for much of the race but didn’t damage his car in his spin and wound up scoring his second top 10 of 2017, a much-needed boost for his team.

The yellow flag made one final appearance on Saturday with just six laps to go, when Wallace had a tire go down and spun after managing to save the car a couple of times. Harvick led the field to the green flag for the last time but couldn’t hold off the charging Blaney.

“It was fun to be a part of,” Blaney said afterward.  “We had a really awesome race car all day, having to start in the back and to be fourth by that first segment end was pretty impressive.  I thought our car was really good at the time.  We made it a little bit better when we got the lead there and was able to kind of control the race that we wanted to and we lost the lead there on the last pit stop.  I thought we had a good pit stop, I just kind of got boxed in and didn’t really angle out very well and that was on me.

“But luckily, we were able to get back on the front row and give us a shot.  It was so hard starting third and when you only have a couple laps to try to get to the front row that was really tough.  I thought we were gonna run out of laps to try to make it happen.  We were getting really good restarts all day once we finally got the pace picked up like it should be, and we were able to shove Kevin in front there and get to second, and just gave us a shot and an opportunity to get by him at the end there on the last restart.

Blaney found his father Dave as the only father-son duo to each win an XFINITY Series race at Charlotte.

Elliott Sadler hangs on to a slim six-point lead over Allgaier in the championship standings. Byron, Hemric and Wallace round out the top five in series points.