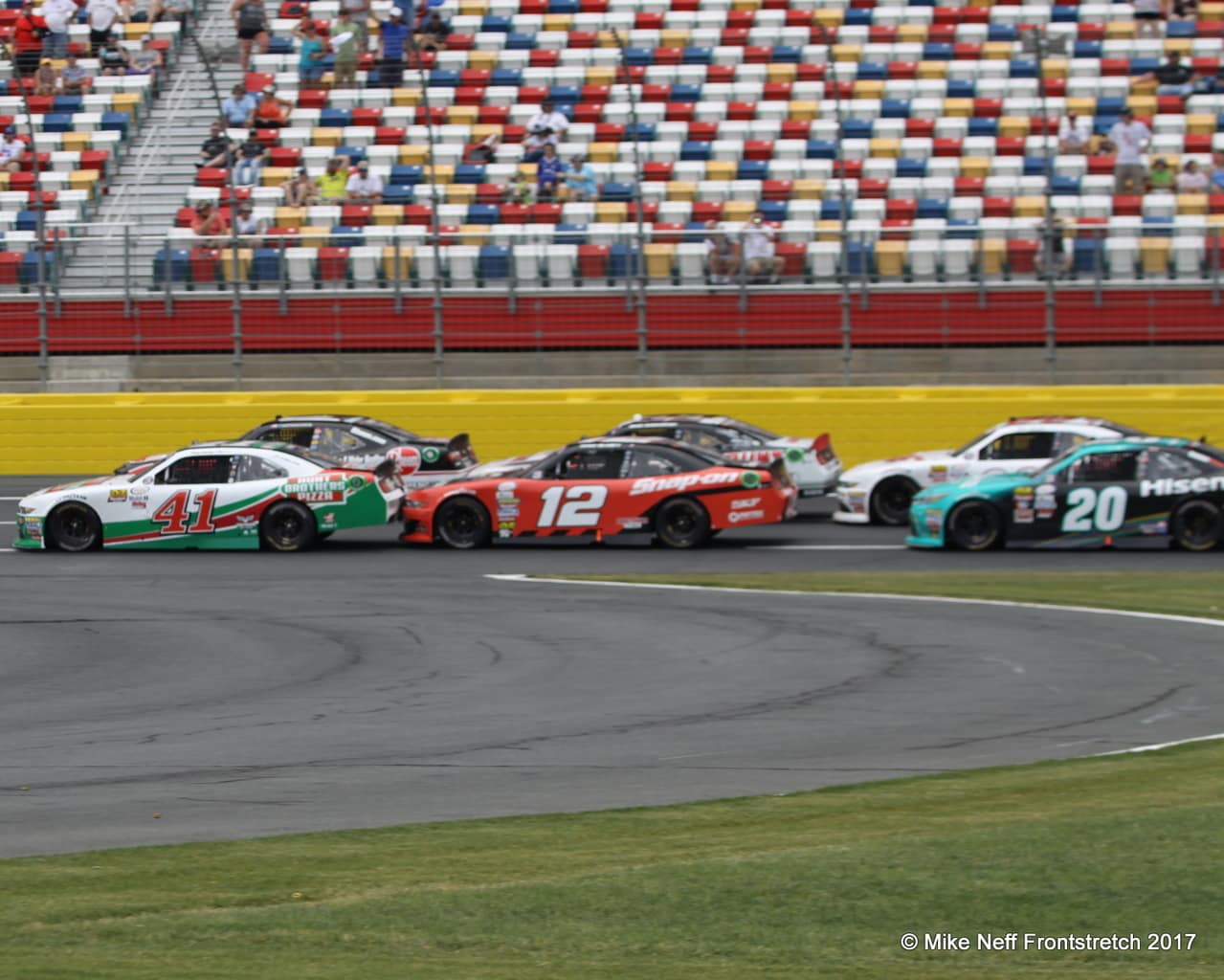 The advantage of clean air in NASCAR was on full display Saturday at Charlotte Motor Speedway.

The entire 200-lap XFINITY Series race, the HiSense 4K TV 300, was an exercise in passing on restarts or playing follow-the-leader. Whenever the field was bunched up after cautions, just the first two laps after the drop of the green was the only time anyone in the field could execute passes. That included the most important ones: on-track passes for the lead.

In the end, it was restart in the first two rows or simply have no shot at working your way to the front.

“It was so hard starting third and when you only have a couple laps to try to get to the front row that was really tough.”

Blaney’s comments should be weighed, though, with how the No. 12 Ford made its way to the win. After starting at the rear of the field, he was able to march all of the way to fourth before the end of the first segment, albeit aided by a handful of cautions.

Austin Dillon made a similar observation on his radio late in the race. He said his car was untouchable out front but he was at a distinct disadvantage if his nose got behind any other cars.

It wasn’t just Dillon or Blaney who experienced the phenomenon. There were only 12 lead changes among seven drivers Saturday. Of those, just one took place outside of the exchange on pit road under caution flag stops or within the first two laps of a restart. Clearly, aero dependency of stock cars is alive and well in the minor leagues of big-time auto racing.

The VHT that was added to the top lane helped a couple of people, but for the most part, it was not beneficial during the XFINITY race. Kevin Harvick was one of the few drivers who put his car up near the fence and actually made some time in turns 3 and 4. Blaney observed in his post-race press conference that most people ran around the bottom early in runs. As a result, a large number amount of tire debris rolled up to the VHT and stuck to it. Getting that cleaned off is difficult and causes the high lane to be less attractive initially.

Once the extra rubber is removed prior to tomorrow, the VHT may prove beneficial. But whether it works in the Monster Energy NASCAR Cup Series will remain a guessing game for, at least, the beginning of the Coca-Cola 600.

Fords finished 1-2. Brian will change the rules. Because he can!

For the first time this year I watched some part of an NXS race. The only thing more spread out than the cars on the track were those souls who occupied about one out of every ten or fifteen seats at Charlotte.
Could they not run this race an hour up the road at Hickory (where this series ran until about 20 years ago)? It could headline the regular Saturday night program there.
A few thousand people in a 75,000 seat racetrack is just a bad look. A few thousand people in a place designed to hold a few thousand people gives the appearance of an event people would want to see.
Not to mention Hickory is (approximately) a 3/8 mile track.

At least they hopefully got to pick their seat! Or did Brian’s police say they had to sit where their ticket indicated?

Last night the Outlaw Sprints ran at the Charlotte Dirt Track. Real race cars. I bet they had more people in the stands for that event.