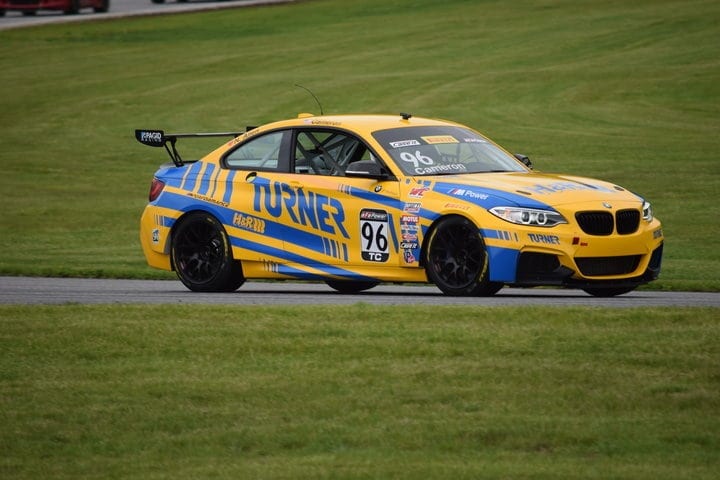 On Saturday, Cameron took the lead from KRUGSPEED’s Elivan Goulart at about the one-third mark of the race.  From there, Cameron held off a number of drivers to claim his first career TC victory.

Afterwards, Cameron was all smiles after an exciting race.

C360R’s Paul Holton was able to grab second on the final lap of the race.  Holton was also amped up after a clean race with Cameron.

Holton took second on the final lap from RacerInk Motorsports’ Cody Ellsworth.  Ellsworth was fast all weekend, but nowhere on Friday due to issues.  He was pleased with his performance despite losing out on second.

“My Cayman was fantastic today.  It was getting better lap after lap,” Ellsworth told Frontstretch after the podium ceremony.  “I got a little held up trying to get around Cameron.  I made a little too quick of a move and [Holton] was able to capitalize right on it.  We’ll take a podium, though.  Great finish for us.

Nick Wittmer in the No. 91 ST Racing BMW M235iR was fourth.  Anthony Magagnoli was fifth, making for three BMW M235iRs in the top five.

Goulart’s chances at a weekend “Hambone” were dashed when he had contact on lap 16 with Paul Holton while fighting for second.  Goulart had recovered from earlier issues and tried to retake the lead from Cameron.  However, he failed to do so and Holton tried to take advantage.  Contact was made and Goulart spun into the wall to bring out a caution.  Goulart was unhurt, but his Lotus was done for the day.

For the TC class, there is a long break before the next race.  The TC class only competes on Sprint-X weekends.  As a result, they will not race again until Utah Motorsports Campus in August.