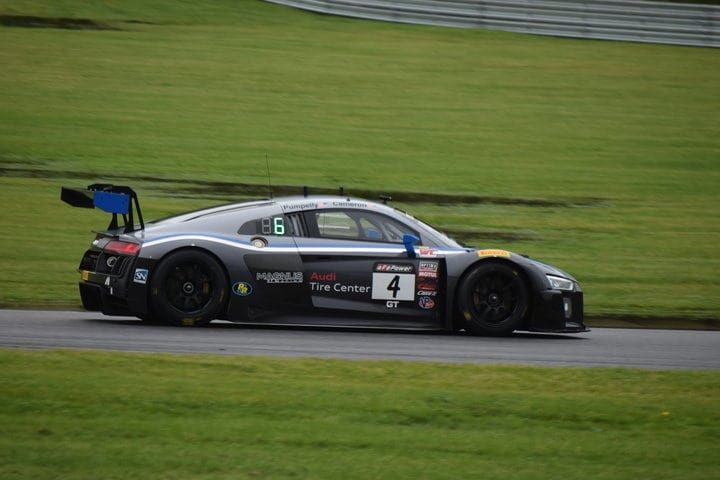 On Saturday afternoon, Magnus Racing’s Spencer Pumpelly and Dane Cameron took advantage of superior pace and an early crash for one of their main rivals to take their first-ever victory in Pirelli World Challenge at Lime Rock Park.

For Pumpelly, the race ultimately came down to lapped traffic.  That actually resulted in a brief scare.

“When I hit traffic, I got a bit luckier than the No. 8 car,” Pumpelly said during the post-race press conference.  “With three laps to go, I came up on a slow BMW as well as the Lamborghini with three different speeds.  So, we went three wide.  I figured we would be clear and all of them.  But the Lambo didn’t clear the BMW and I touched the Lambo. A lot of rubber came off my car and caused the car to ‘thump.’  I thought it cut a tire. Fortunately, that wasn’t the case and we were able to run to the checkered flag.  A nice win for the team.”

The biggest moment of the race was at the very start of the event.  Pole sitter Marc Lieb didn’t get a very good standing start, resulting in the pack stacking up on the pit straight.  TR3 Racing’s Niccolo Schirò tried a very optimistic move to the inside.  Contact was made and the No. 58 Wright Motorsports Porsche spun.

Lieb made contact with the inside wall, then slid across the grass to Big Bend.  At Big Bend, Lieb, unable to stop on the wet grass, slid in front of traffic.  There, he was hit by CRP Racing’s Ryan Dalziel.

Dalziel was able to continue after repairs in the pits.  He, along with teammate Daniel Morad, would eventually finish ninth.  Lieb’s Porsche was unable to continue on its own.  They were done for the day.

As a result of the crash, Cadillac Racing’s Jordan Taylor inherited the lead with Cameron hot on his tail.  The two leaders seemed to be evenly matched.  In addition, the two cars were stronger in different sections of the track.  As a result, an alternate strategy came into play.

During the ten minute pit window, Magnus Racing chose to allow Cadillac Racing to pit Taylor first.  The goal was to run as fast of an in-lap as possible on Pirelli tires that were up to temperature.  Afterwards, they would pit and be as close to the 60-second minimum time in the pits as possible.

The strategy ultimately worked.  Once Pumpelly got in the No. 4 Audi, he got out of the pits just a couple of car lengths in front of Michael Cooper.  From there, Pumpelly buckled down and put in a series of quick laps in order to pull away.

K-PAX Racing’s No. 9 McLaren for Àlvaro Parente and Ben Barnicoat finished third, 20 seconds back.  Absolute Racing’s Vincent Abril and Adderly Fong were fourth, while RealTime Racing’s Tom Dyer and Ryan Eversley were fifth for the second consecutive day.  Eversley was not particularly all that pleased with Fong’s driving late in the race as the Bentley was ultra-defensive nearly to the point of blocking.

In GT Pro-Am, it was once again Wright Motorsports’ Jan Heylen and Michael Schein on top of the podium.  The No. 16 Porsche finished nearly 21 seconds in front of Always Evolving Racing/AIM Autosport’s Frankie Montecalvo and Ricardo Sanchez.  GT Am-Am was won by NGT Motorsport’s Henrique Cisneros and Tyler McQuarrie by three seconds over The Racers Group’s Drew Regitz and Kris Wilson.

Pirelli World Challenge is back in action in four weeks at Road America.  That will be a Sprint weekend with 50-minute races for the GT, GTA, GT Cup and GTS Classes in support of the Verizon IndyCar Series.  The next Sprint-X weekend is in August at Utah Motorsports Campus.