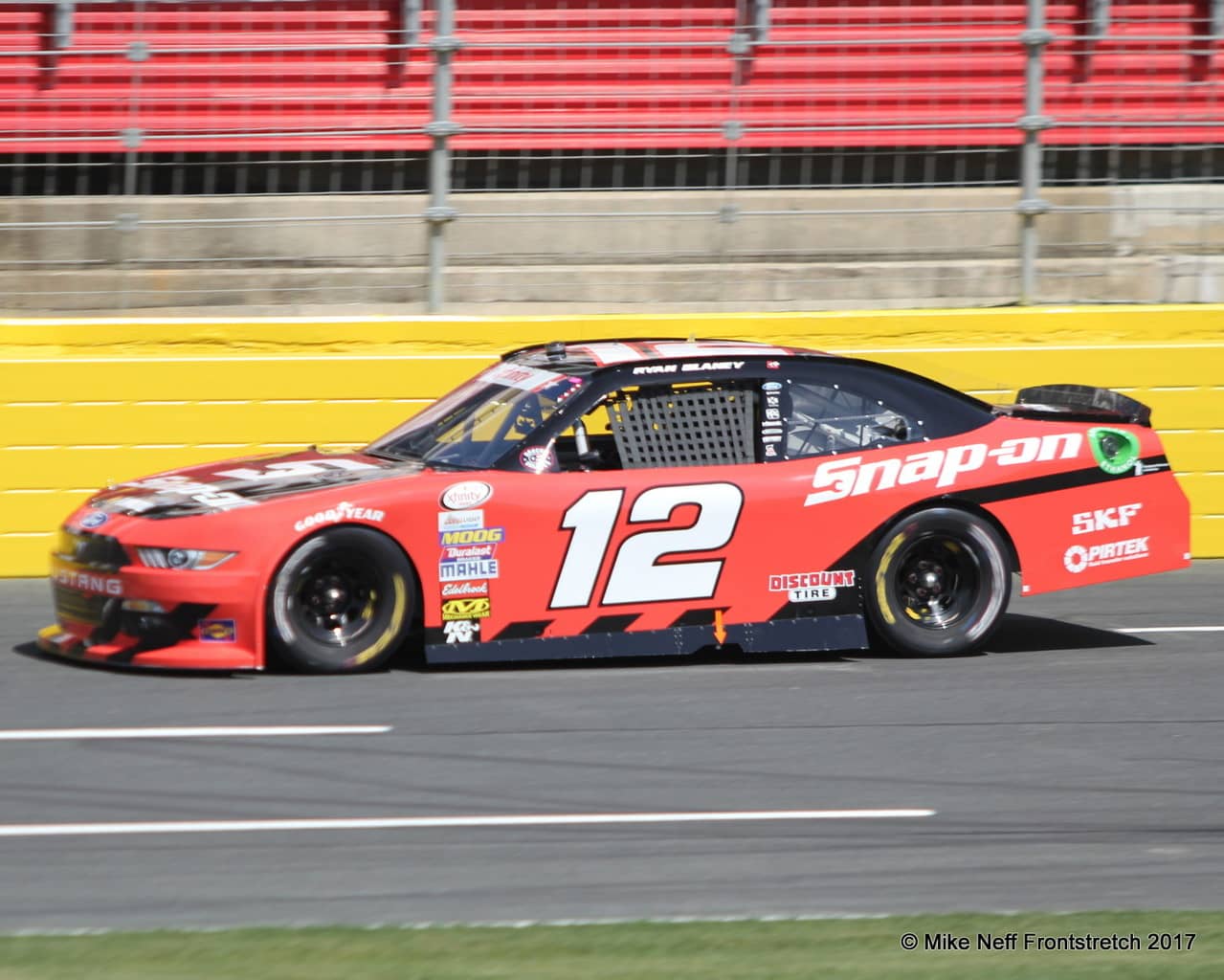 Starting from the rear for fixing the right side of the No. 12 car prior to the initial green flag, Ryan Blaney raced his way up to fourth in the opening stage at Charlotte Motor Speedway. Coming out of the pits second, the North Carolina native took the lead from Kevin Harvick on the start of Stage 2, then the race was his to lose.

Blaney led flag-to-flag in Stage 2, picking up his second stage victory of the season. However, the second stage was uneventful, compared to the rest of the race, that had 12 yellow flags.

The No. 12 car was out front for 107 laps, the second most of Blaney’s XFINITY Series career. But with 42 laps to go the race started to slip away, when he came out of the pits in third position, behind Harvick and Austin Dillon.

It took a series of late-race restarts, but Blaney edged to the lead with three laps to go, passing Harvick for the top spot. The 23-year-old did not look back.

“It was really tough,” Blaney said in Victory Lane of the late restarts. “We kept having tons and tons of cautions, and we lost the lead on a pit stop, which we kind of got blocked in. I was really hoping we would get a shot at it, and we finally got to the front row. I got a good restart and and was able to barely stay to his quarter off of [Turn] 2 and drag him back into [Turn] 3. It’s awesome to get back into Victory Lane.”

Charlotte was Blaney’s fifth start in the XFINITY Series of 2017, and all five races have ended with top-five results. His next race will be next weekend at Dover International Raceway.

There were 13 restarts in Saturday’s event, which led to some of the best racing the series has produced all season. Three, four-wide racing at times, and whenever Ty Dillon restarted on the outside line, which seemed like almost always, you knew he was going to make a move, as he did all race long.

The restarts led to a ton of carnage, as two, late in the race, resulted in less than one lap of green flag racing before the next caution flew. On a restart with 20 laps to go, Michael Annett blew a tire going into Turn 3, which brought out a caution. On the resuming restart, championship leader Elliott Sadler got loose off of Turn 4, spinning the No. 1 car into the outside wall, resulting in a 35th-place finish.

The racing was superb on Saturday. Track officials spent the majority of the week leading up to the weekend’s events putting down a VHT substance on the outside line, which is what has previously been used on the bottom line at Bristol Motor Speedway to put on competitive racing. The sticky substance did its job because this was one of the best races of the year in the XFINITY Series, especially back in the pack.

A Cup Series regular wins again. Sure, Blaney picked up just his fifth career victory, and first since 2015, but Cup Series stars have won nine of the 11 XFINITY Series events this season.

It’s not a matter of if the XFINITY Series teams can get it done, because they can. Ryan Reed won at Daytona and Justin Allgaier was victorious in Phoenix, but overall, the series, at least recently has been a place where the Cup drivers come back and steal the show.

Dillon said it best on the radio today after jumping the initial start of the race.

NASCAR is in a box because it has already limited some Cup Series drivers, specifically the veterans from competing in the XFINITY Series. The last five champions of the series, dating back to 2011 with Ricky Stenhouse Jr. winning back-to-back series titles in 2011 and 2012, have full-time rides for competitive teams in the Cup Series.

The slogan “names are made here” has become true, but not for the reason of winning races. Outside of 2016, it’s been a while since we’ve seen XFINITY drivers compete for wins on a weekly basis, and last year it was mostly in part because there were two Joe Gibbs Racing was dominating the division, picking up seven combined victories between Daniel Suarez and Erik Jones. Sadler also won three events.

This year it has been all one-sided.

Ugly would not define this race. But there were a lot of miscues by top XFINITY Series drivers.

Besides Allgaier winning the pole and leading the first seven laps, JR Motorsports struggled on Saturday. The highest finishing car was the No. 7 team in 12th.

There were many times in which teammates were racing each other extremely hard, really early on. Brennan Poole bounced into  Tyler Reddick, his Chip Ganassi Racing teammate, putting him into the wall in the first stage. In Stage 2, he got into the back of the No. 42 car, sending him up into the wall, again.

The pair of Roush Fenway Racing teammates Reed and Darrell Wallace Jr. did not give an inch on the race track, as they have also had trouble in the past.

Toward the end of the race Christopher Bell and Denny Hamlin battled extremely hard for fourth position. The two Joe Gibbs Racing teammates were battling from outside the top 10 late in the race to round out the last two positions of the top five.

Where did the love go, teammates?

What a day for 22-year-old Bell, who made his XFINITY Series debut.

Obviously, competing in the No. 18 car for Joe Gibbs Racing should not make a driver an underdog, but Bell bounced back from adversity early in the race to come home with a fourth-place finish.

On Lap 2, Bell spun coming off Turn 4 with help from Reed. The No. 18 car went sliding through the frontstretch grass, though not tearing up the splitter, which is what happened to Jones in The Open last week when he made a move for the lead.

Bell restarted from the rear and made his way solidly up into the top 20, but never showing showing the speed the car really had. During the late-race restarts, the No. 18 car jumped from outside the top 10 to come home fourth, the highest of drivers who are not Cup Series regulars.

Currently second in the championship standings in the Camping World Truck Series, Bell is scheduled to compete in six more events for Joe Gibbs Racing, the next coming at Pocono Raceway in two weeks.

189 of the 200 laps were led by Cup Series regulars, though at time the XFINITY Series drivers would battle for the lead or positions near the front. Blaney led a race-high 107 laps, while Harvick paced the field for 58 circuits, Austin Dillon led 20 and Hamlin, making his second start of the season led four circuits.

Justin Allgaier led the charge early, after winning his first pole since the spring race at Bristol in 2013, en route to leading the opening seven laps. Wallace was the only XFINITY Series regular that was able to pass the Cup stars for the lead, when he passed best friend, Blaney.

Five of the first six positions in the finishing order went to Cup Series drivers. The younger Dillon came home 18th, after struggling late in the race on restarts. JJ Yeley, who is competing in the No. 7 Cup Series car for Tommy Baldwin Racing this weekend finished the XFINITY race in 22nd, spending most of the race in the top 15.

“I felt like if I let [Blaney] and [Keselowski] get paired up on the top [line on the restart], I’d be in double-trouble.” – Kevin Harvick

“I’m thrilled, we had to fight through a lot of adversity there so I’m pretty happy.” – Christopher Bell

“It all comes down to those last restarts. It just took too long for us to battle back there.” – Denny Hamlin

If it weren’t for the restarts, there is no telling how this race would have played out. Part of it is the intensity with stage racing.

Sure, Stage 2 had no cautions and Blaney led every green flag lap, but the racing throughout the pack was still intense. Stage 3 is where the race hit its peak with unpredictability.

Stage 3 saw seven cautions with four drivers exchanging the lead back and forth. Because of stage racing, there are no gimmes anymore, and the race is not won until the last lap, even in the XFINITY Series. Look back at Richmond when Allgaier dominated the race, but came up short because of a late restart. At Bristol, Kyle Larson was in command, leading 180 laps, but Jones beat him for the victory.

Ultimately, stage racing is the best thing that happened to NASCAR in a while, and it’s here to stay. It leads to the excitement, including 1.5-mile tracks, which in the past, have not been the best performance in the XFINITY Series.

Here comes Miles. NASCAR takes all three of its series to the Monster Mile next weekend at Dover International Speedway. Jones is the defending winner of the event, leading 76 laps en route to his second win of 2016. Suarez is the most recent winner at the 1-mile track, dominating the fall race.