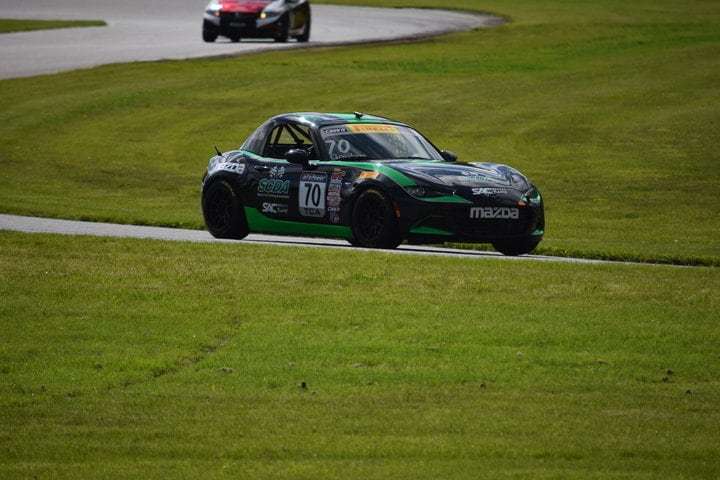 Earlier today, we noted that Elivan Goulart was going for weekend sweeps in both Pirelli World Challenge’s TC and TCA classes at Lime Rock.  A crash in TC Race No. 2 earlier in the day prevented a weekend hambone (four victories) for Goulart, but he still came back and swept both TCA/TCB races overall.

Both races saw Goulart claim the overall pole, then streak away from the field.  The first race on Saturday morning was the harder of the two sine the field stayed together.

“We had a good start,” Goulart said after the race.  “Went deep into the braking zone.  [Dean] Copeland behind me went in a little deeper and tapped me from behind.  That got the car a little out of shape, but we were able to recover.

“I opened up a gap and tried to maintain it and control the race as best as I could and manage the tires,” Goulart continued.  “Can’t say enough about the team.  They did a phenomenal job with the car.  Very happy to be here.”

There was an early full course caution when Eric Laporte went straight at the exit of Big Bend and hit the outside wall.

Full Course Caution No. 1 is out here at @limerockpark. 50-Eric Laporte went straight exiting Big Bend. He got stuck there. #PWCLRP pic.twitter.com/we2qbOrU8z

The incident kept the field bunched up together early on.  Once the green came back out, Goulart pulled away from the pack while his S.A.C. Racing teammate Matthew Fassnacht gave chase in second.

Fassnacht was roughly four seconds behind Goulart in second when he spun off at turn 4.  He managed to recover, but dropped all the way back to sixth.  Shea Racing’s Tom O’Gorman inherited second in the lone current-generation Honda Civic Si.  However, O’Gorman later cut a tire and had to pit.  O’Gorman would eventually finish a lap down in 10th.

The second race was much more anti-climatic with Goulart taking another victory from the pole.  Fassnacht was second, 6.85 seconds back.  O’Gorman was third and Powell was fourth.  These four cars were the only cars on the lead lap at the end of 40 minutes.  Copeland was a lap down in fifth.

In TCB, Tech Sport Racing’s No. 24 Chevrolet Sonic for Canaan O’Connell had a very uneventful first race.  O’Connell was able to open up a decent advantage over Jake Pipal, then held steady to take his second career professional victory.

Afterwards, O’Connell was overjoyed to win at a track that he had always wanted to race at.

“I’ve always watched this race [and thought] that it would be so fun to come to this racetrack,” O’Connell said after the race.  “Its such a roller coaster.  To finally be able to do it is a dream come true.  Very, very busy.  The car is never balanced.  With the extreme speeds of some of the corners and the elevation changes, it just agreed with my driving style.  It was awesome.”

Race No. 2 saw Washay put his MINI out front early on.  The Milford, Ct. resident wanted to bring home the victory in front of his hometown fans, but it was not meant to be.  O’Connell was able to run Washay down and take the lead late in the going.  From there, O’Connell pulled away to take his first weekend sweep.

Groenke ended up in second to give Tech Sport Racing a one-two finish.   Handwerk finished third, followed by Pipal and Washay.

The TCA and TCB classes are now off for the next two months.  They will not be back in action until Pirelli World Challenge travels to Utah Motorsports Campus west of Salt Lake City in August.