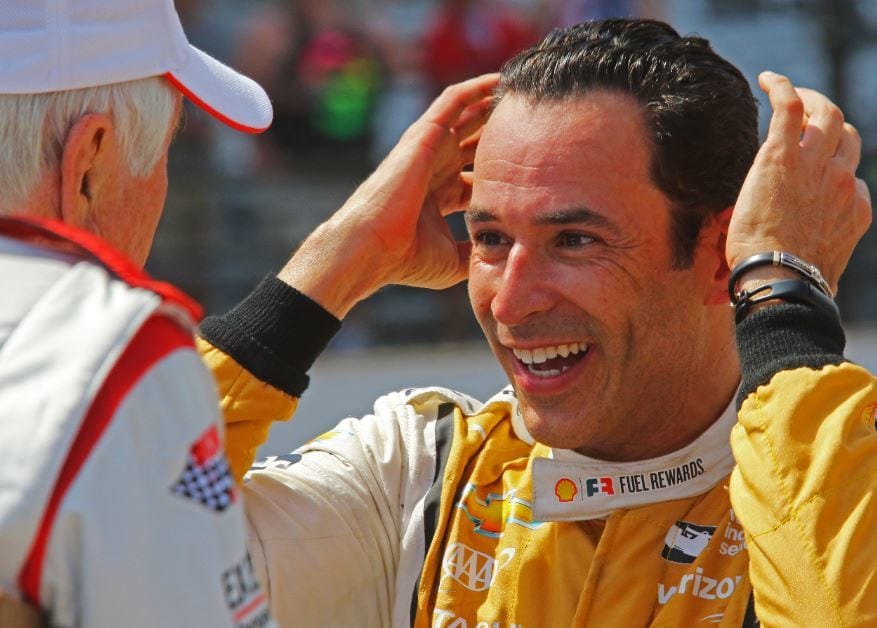 Even from the drop of the green flag to start 500 miles, the three-time winner was at a disadvantage, starting from his worst career qualifying position at Indy in 19th.

The day quickly turned from bad to scary, as he was the next driver behind Scott Dixon, who flew over the top of Castroneves in one of the most incredible accidents in the race’s history.

Coming only 53 laps into the event, Castroneves suffered small wing damage, but could continue without much issue.

“When we stopped because of the red flag, we noticed that there was the winglet broken and the front wing was broken, too.”

A penalty hit the No. 3 on the ensuing restart, as he was busted for passing before the green flag on lap 60.

“They call green. I went,” he said. “But they said I jumped the start. Very disappointed on that one. I would like to see some reviews. Hopefully they can convince me that I did jump the start.

In no time, the 16-time starter of the Indy 500 made his way through the field to contend for the victory in the closing laps. Leading the event for nine circuits, he battled tooth and nail with Max Chilton, who led the most laps of the day at 50, and eventual race winner Takuma Sato as the laps ran down.

The power, unfortunately, was not there for Castroneves’ Chevrolet, as Sato held him off with ease, winning by more than two tenths of a second.

“I [tried] everything I could with three laps to go,” he said. ” Unfortunately, my tires were overshot a little bit. I would have [ended] up in the wall. Man, [Sato] just took off and that’s it. That was my last chance.”

For the second time in the last four years, the 42-year-old came up short of reaching that elusive fourth Indy 500 victory. Though it was another close effort, Castroneves was upbeat after the nutty afternoon he had.

“What can I say? My race was pretty adventurous,” he said. “We started from the back, then we went to the front about lap 50, then were in the top 10. This place brought the best out of me. It was pretty good.

“But I’m really disappointed for the fans, for my team. They gave me a great car. I did everything I could, trust me, everything I could. Yes, finishing second again sucks. So close to get the fourth. I will not give up this dream. I know it’s going to happen. Unfortunately, second place is the best for us today.”

Coming home with the most sour runner-up result in racing, Castroneves still found a positive, as he leads the Verizon IndyCar Series points heading into next weekend’s double-header Belle Isle Grand Prix.

“The good news [is], sounds like we’re leading the championship. Hey, there is always a positive note. I think that it is very positive.”