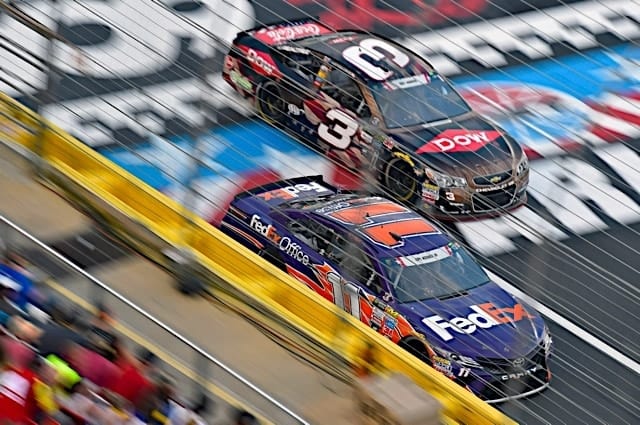 Winning is everything. There is no trophy for second place in NASCAR. No silver medal. No celebratory champagne. Nothing. Just a runner-up finish on the stat sheet.

For the second time this year, Kyle Busch came oh-so-close to Victory Lane, but finished second. This time, it was to Austin Dillon, who earned his first career win, taking home the checkered flag in the Coca-Cola 600 at Charlotte Motor Speedway.

The second-place finish is yet another kick in Busch’s rear end this year. But more importantly, it leaves Joe Gibbs Racing still winless, despite Busch’s triumph in the Monster Energy All-Star Race.

But on the other side of the NASCAR spectrum, Richard Petty Motorsports is still scattering to find a solid replacement for an injured Aric Almirola.

Currently, the team is utilizing the talents of Regan Smith to pilot the No. 43 Ford. It appears that the team might stick with him until Almirola is completely healed. However, some believe that it is the perfect chance to give another driver a shot at a mid-pack ride in NASCAR’s premier division.

Q: RCR has two wins this year. JGR has none. What is going on with Gibbs? – Jeremy K. Austin, Texas.

A: Joe Gibbs Racing is still capable of winning races. There is no doubt that JGR is a top-tier organization and that the team can run up front on a weekly basis.

However, it is clear that inconsistency is hurting this organization.

Busch is the lone driver within the four-car team who sits inside the top 10 in the standings through 12 races. Three of the squad’s four drivers sit 11th to 19th in points, with Denny Hamlin leading the way in 11th.

Each time Busch, Hamlin or Matt Kenseth have shown the speed to win races, something goes wrong. A late-race restart or pit strategy can simply kill one’s shot at victory. For JGR, there always seems to be something that keeps one of its drivers from pulling into the Winner’s Circle.

While JGR is showing plenty of speed as of late, the team struggled to start the year. Following the fifth race of the year at Auto Club Speedway, Busch sat 10th in the standings, the highest of any driver on the team. Those are just breadcrumbs compared to the seven victories the organization already had at this point last season.

But the Gibbs camp is starting to rebound.

Busch led 63 laps on Sunday night before finishing a disappointing second. Hamlin even led 10 laps. Overall, it was a great night for JGR, with three drivers in the top 10 and rookie Daniel Suarez finishing 11th.

It’s certainly a big improvement from Richmond International Raceway, where Hamlin finished third, with Kenseth and Busch struggling throughout the race.

Time will tell when JGR gets back to Victory Lane. Expect the team to start winning sooner rather than later.

Luck has its ways. Look at RCR’s two wins this year — one with Ryan Newman and the other with Dillon. Newman simply had a great strategy to win at Phoenix International Raceway. For Dillon, the luck was on his side and he led just two laps to win NASCAR’s longest race.

Though RCR might not have the speed JGR has, the Chevrolet organization is coming in clutch at the end of races, and that’s when it counts the most.

A: Regan Smith is arguably the most stable driver this team can put in its lone entry. If the team had two cars like it did in the past, RPM might feel OK with taking the risk of going with a younger driver, but that isn’t the case.

Smith is known for being a solid driver, one who can run up front when given the equipment and doesn’t wreck often. In three full seasons with JR Motorsports in the XFINITY Series, he ended only two races in the garage area.

During the Coca-Cola 600, Smith did what he needed to do — keep the car in one piece. He ended the rain-filled evening one lap down in 22nd, just under five spots worse than Almirola’s average finish of 17.3 prior to sustaining a back injury at Kansas Speedway.

The respectable, but not outstanding, run is what RPM can expect out of Smith. When he replaced Kurt Busch at the start of the 2015 season, he struggled in qualifying but came on later in the race to earn a pair of 16th-place finishes and one 17th-place result. A few weeks later, he was called upon once again to fill in for Kyle Larson, where he also finished 16th.

For a car that is capable of running in the top 15 this year, can RPM get anyone better than Smith? Probably not.

But what the team can do is begin preparing to have a future driver in one of its cars should the team take back its charter from Go Fas Racing rather than selling it altogether prior to the 2018 season. RPM can work inside of the Ford camp to give Ryan Reed and/or Darrell Wallace Jr. a shot at NASCAR’s top division, which could lead the way to bring in sponsorship dollars for next year should the young guns run well.

Smith is definitely going to do a solid job at feeding information to RPM should he stay in the No. 43 car. Remember, the team still has a job to fill in its notebooks and having a veteran racer can’t hurt with that. But giving a shot to a young driver could pay off for the long term for a team looking to get back to the top.

Wow!!!!!!! Qhat an utterly different reality I have regarding REGAN SMITH. Huh…….