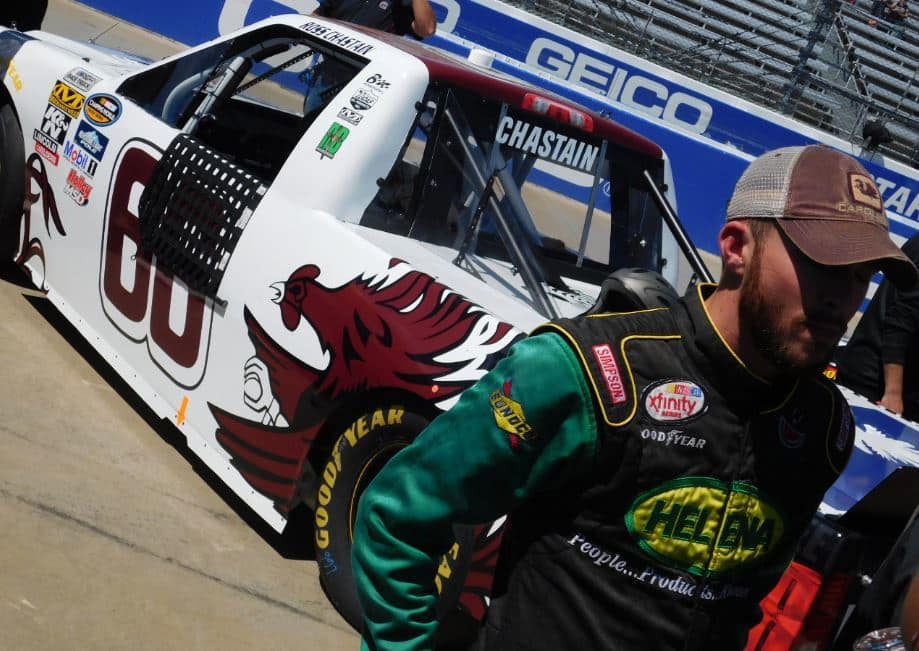 Ross Chastain is getting set to embark on a career milestone. The Florida native, who usually features watermelons on his racecars, will make his Monster Energy NASCAR Cup Series debut this weekend at Dover International Speedway with Premium Motorsports in the No. 15 Chevrolet.

Chastain, 24, looks to use his Cup debut as a chance to learn as he understands that he can’t prove anything if he overdrives and gets into an accident. Frontstetch spoke to Chastain, JD Motorsports’ lead driver in the XFINITY Series, as he discusses what went into getting this deal together, along with future plans of racing in NASCAR’s top division.

Joseph Wolkin, Frontstretch.com: How did the deal come about to get you a Cup ride?

Ross Chastain: Basically, Johnny Davis and the whole team there with the Delaware Office of Highway Safety wanted a presence on Sunday. Without me really knowing, Johnny and our VP of marketing, Tony, came up with this idea that I could represent them Saturday and Sunday since we’re doing so much already. They pitched it and asked me later. They loved the idea, and we’re doing a lot with them outside of the racetrack and a lot inside with Dover International Speedway. I actually just saw some stuff where they have the walls labeled with our ‘Buckle Up, Protect Your Melon’ stuff. It was kind of the Office of Highway Safety and JD Motorsports coming together with the idea. They wanted me to be the guy since we’re doing so much with our other stuff.

Wolkin: You have some success at Dover, but this will be a completely new challenge. What are your expectations?

Chastain: I’m very fortunate that I get to run the Truck Series race on Friday. I’ll get to go track a bit on Thursday to run some laps. We’re going to run all three Friday and then focus on the cars on Saturday. The truck has been running good, so expect some good things out of it, with the [XFINITY] car as well. We put a whole race together last week and finished strong in 15th. We’re looking for more of the same with that. We finished 12th here last fall, which is really strong for us. I’m being realistic with everything.

On Sunday, competition wise, we all understand our situation and know that it’s all about getting some exposure out of it and getting some laps for me. I really hope and do think that it will help me with some other stuff. This is not an audition or anything on Sunday. I hope I’m not on TV for anything crazy because if I do something pretty stupid, it’s the only way we’re going to get on TV. We’re going to minimize the mistakes – if that’s possible – and that’s goal number one. It’s not going to be the prettiest thing, but I’m just ready to learn and get on track in practice and in the race.

Wolkin: Have you ever tested a Cup car before?

Chastain: I’ve never sat in one. When we were making the mount in my seat in it yesterday because I’m using the same seat I just used in the XFINITY race at Charlotte, they actually didn’t have the car I was going to race up in Dover for Sunday. We got everything mounted in a different car that they don’t even use in a race. I’ve never sat in a real Cup car yet, so I guess I won’t do that until Friday.

Wolkin: How much does it mean to you to get the opportunity to go Cup racing?

Chastain: I can’t even put it into words, man. When I first got the call about the idea of it and what I thought, I wasn’t too sure. I asked myself, ‘would I be prepared?’ Once they explained everything to me, even off the track stuff that is going into this program and looking at the big picture with more than just one race on Sunday, it opened my eyes that this is the right move. It’s the right decision to make for me and everybody involved with JD Motorsports, the watermelon campaign and the Office of Highway Safety in Delaware.

We’re branching that out quite a bit in New York as well with the Watkins Glen race. It’s a lot more of a bigger picture than ‘can you go run a car around a track for 400 miles and not tear it up?’ Realizing that was probably the biggest thing that I had to do right off the bat. It’s the same old thing with hydrating and preparing myself with what I need to eat leading up to it is important. Getting enough sleep between all of the races will be big, too.

Wolkin: Did you ever think you would get the chance to prove yourself in Cup?

Chastain: This is not something where I’m trying to prove anything. I don’t feel like I owe anything to anybody to do anything. Nobody owes me anything to be in it. There are a lot of good racecar drivers out there and a lot of guys that know more than me. I’m working to get better. On the track is one thing, but off the track is where I’ve had to work the most because I realized that’s how you get anywhere in this sport. It’s all behind-the-scenes stuff with people working to keep pushing my career. This isn’t an audition or anything. Everything came together just right, but we’re hoping to do some more. If nothing else, I need to run a few more and pay for the dang Cup license that JD Motorsports had to invest in.

Wolkin: You say you want to run a few more Cup races, but are there any concrete plans for you to do so?

Chastain: I think a lot of it will depend on how this race goes. It will all be circumstantial. I just need to race as much as I can. Running the [No.] 66 truck has helped me a ton with my confidence. I picked up stuff at Charlotte – and I’ve been running there for five to six years – that I’ve never picked up on. Coming back in the truck really helped me in the race. I multiplied that and it helped me even more with stuff that I could do with the track. It’s just several things with repetition around the track is the best way I can learn. It’s all baby steps for me.

Wolkin: You’re working with Premium Motorsports this weekend, but how much of the effort will be with your JD Motorsports guys?

Chastain: Everything competition wise on track is with Premium. Mark Hillman and Jay Robinson are bringing everything we need. They’re crewing it and everything. Johnny had a relationship with Jay, and it was the obvious choice for a stepping stone to go from Saturday racing to Sunday. Running for a XFINITY standalone team, we don’t get help racing wise. It’s purely friendship and mutual acquaintances.

There was an open door for me at Premium and Johnny lined it up and told me about it after he got it lined up. He asked me if it was the wrong thing to do and I told him it made sense to me. Johnny called me out of the blue one day and asked if I could come out to Gaffney [South Carolina] to ask me to drive his car. We ended up being the flagship car for his team. For him to make the call and set this up for me, it’s pretty cool that this can even happen these days in the sport. This has been all of his doing. The initial call for me to drive the [No.] 4 car and now to drive the [No.] 15 here on Sunday at Dover is all JD Motorsports pushing me, which is the opposite in my career.

Wolkin: Did you have any hesitation to do this now rather than waiting for the call from a larger team?

Chastain: The calls just don’t happen. It’s just not how things work these days. There was definitely a little hesitation. I had to sit down and think to myself and talk to my dad. I listened to everybody and formed my own opinion on it. I truly believe that this is the right move for everybody involved this weekend. By me running on Sunday and we save one person’s life who sees the Buckle-Up campaign, it will definitely be worth it.

On the racing side, it’s just going to help me be a better racecar driver. Where our focus is right now is definitely on Saturday. All three vehicles will be wrapped the same way, and I’ll get some laps in the truck on Thursday. There’s a lot of different factors that went into it. There was definitely a moment of hesitation, but it was definitely for all of the right reasons to make sure this is right for everybody and not just looking out for me.

Wolkin: This is also the first time you’ll be performing triple-duty in a weekend. What goes into preparing for three different races at Dover?

Chastain: I had a truck race a few years ago here that was so hot that I had a trackbar break. In my helmet hose, I just ran one hose to come up into my helmet, and that’s the only cooling I have. That broke as well at the beginning of that truck race. I was definitely so hot that I blacked out for a second. I’ve done a lot of work with myself since then to be more physically fit, and running more races helps. The best workout I can do is run a race.

All of the work has been done, and now it’s about maintaining and eating right. Once it comes to Friday – I think Friday is going to be the hardest part – with practice and then the truck race to end the day. I’m fortunate and blessed to have my family here with me. We’ll have a golf cart ready to go. We have schedules all printed out for my mom, dad and brother. The golf cart is going to run me from one garage to another. The motorhome is there if we need it. Once we get done with each day, it’ll be early to bed because it’s early to rise each day. I’m looking forward to the challenge and putting together quality days.