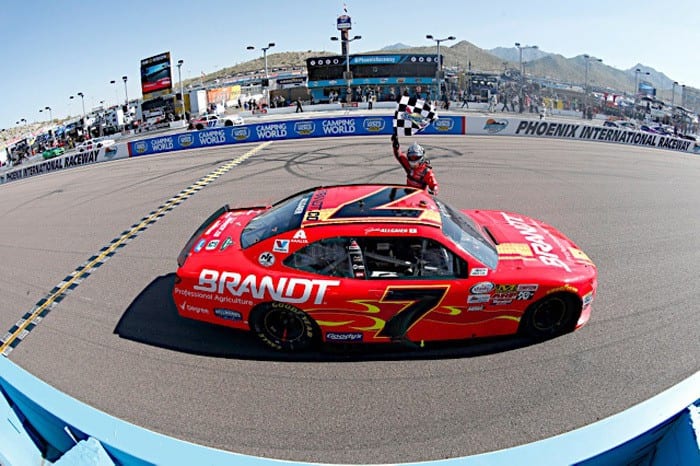 Coming on the heels of two consecutive bye weeks, the XFINITY Series took to Charlotte Motor Speedway this past Saturday, and to no one’s surprise a Cup Series regular was victorious.

Over the past several years, that has been the theme of the XFINITY Series, even though “names are made here.” But there is a bright side.

Compared to other years, the XFINITY Series is more competitive. Sure, last year there was a helluva battle down the stretch for the 12th and final playoff spot between Ryan Sieg, Dakoda Armstrong, Jeremy Clements and even Ross Chastain, from little ‘ole JD Motorsports.

Evidently, the best 12 cars competed for the chance at a championship. Through 10 races this season, some high quality teams will need to rebound in order to make up the best 12 team field to run for a championship as the series begins a sprint to the playoffs, competing 20 straight weeks.

10 races into the season, and one thing is for certain: NASCAR limiting Cup Series drivers from performing in lower divisions has had little affect, specifically in the XFINITY Series.

Eight of the 10 race winners this season have gone to the more experienced drivers. Ryan Reed kicked off the season with a bang, winning for the second time at Daytona. But let’s face it, Daytona is a tossup, anyone can win.

Sure, Reed’s performance was impressive in the longest ever XFINITY Series event, leading nine laps after getting caught up in a pair of incidents. He definitely earned it, outlasting Cup stars Kasey Kahne, Austin Dillon and pre-race favorite Brad Keselowski. But the fact of the matter is there were not that many Cup stars who participated in the event, plus it’s a restrictor plate track.

Since Daytona, Cup guys have taken over.

Erik Jones has picked up a pair of XFINITY Series victories through 10 races, as he has made the transition to full-time in the Cup Series. Surprise, surprise, Kyle Busch is an XFINITY winner in 2017. Add Joey Logano, Kyle Larson (two wins), Aric Almirola and Ryan Blaney and quickly, the Cup stars have become dominant.

Outside of Daytona, in which XFINITY drivers combined to lead more than half the race, laps led have come far and few between too.

Between Atlanta and Las Vegas, JJ Yeley was the only XFINITY Series driver to lead a lap, and that was by staying out during a caution flag. At Phoenix, Justin Allgaier made a statement. But then at Auto Club Club Speedway the Cup Series ran rough-shot again, leading all but three laps.

Outside of Allgaier leading the most laps at Richmond and leading 24 circuits at Talladega, the last five events have been dominated by Cup Series drivers. And unfortunately, that is going to continue.

The three JR Motorsports Chevrolets of Allgaier, Sadler and William Byron have scooted away from the rest of the pack. But from fourth on back, the heat is on.

Daniel Hemric earned a playoff point at Bristol, winning the second stage. The No. 21 team looks to be in a solid position going forward, and it starts off with their league-best 7.8 average qualifying position, including the pole at Richmond. The 26-year-old is tied with Byron for third in overall stage points in the series.

The pair of Roush Fenway Fords are among the most improved teams in the XFINITY Series from last season. Reed is locked into the playoffs but is also right on the verge of consistently putting the No. 16 car in the top 10, with three 11th-place efforts this season. His teammate, Darrell Wallace Jr. is continuously on the cusp of cracking the top five, piling up six, sixth-place efforts this season.

Brennan Poole, Matt Tifft and Michael Annett make up position seven through nine in the current points standings. These three drivers are all-but-locks from making it to the playoffs.

Poole and the No. 48 team showed some speed at Charlotte, and as the season is going to hit its stride, 1.5-mile tracks dominate the schedule. Tifft drives for Joe Gibbs Racing, plus he is a rookie. Under-performed so far, maybe, but as the 20-year-old goes to some of these tracks for a second time– track time is a virtue. Annett drives for this years powerhouse JRM. He has to make it into the playoffs.

Blake Koch sits 10th in points and is out-performing most of Richard Childress Racing, the team Kaulig Racing is affiliated with. The No. 11 car has been relatively fast at every track this season and is currently 65 points above the cutoff.

Then it gets interesting.

Rookie, Cole Custer is in a solid position 11th, for a start-up Stewart-Haas Racing XFINITY Series team. The No. 00 team has the speed, but never can seem to close out the final third of the race. Fontana comes to mind as he was running the top 10 for the majority of the first 100 laps, got crashed, finishing 35th. Days like that eat at drivers.

Currently, Armstrong hold onto the final playoff spot, 34 points above Yeley and Sieg. And both of those teams are sitting ahead of a pair of RCR drivers, Brandon Jones and Brendan Gaughan— which it looks like adding a fifth full-time team to RCR has hurt the performance, company-wide.

At this point last season Jones sat comfortably on the playoff grid in sixth. In 2017, he has yet to post a top-10 finish. Gaughan is in a similar position. After the Charlotte race in 2016, he was fifth in points, and reached as high as fourth. This year, he is 42 points behind Armstrong with two top 10s, including Charlotte, which could be a swing in the right direction.

If Jones and Gaughan are going to contend for the final playoff position, possibly even get in, that means one or two teams have to come out. But who?

Allgaier has made a statement through 10 XFINITY Series events. He, and the No. 7 team has proven that they are one of few XFINITY regulars that can battle with the big boys (Cup Series), and at some points outrun them. In fact, it’s happened quite often.

Sure, Allgaier’s season got off to a horrendous start at Daytona and Atlanta Motor Speedway, but then it sky-rocketed. The No. 7 car finished fourth at Las Vegas Motor Speedway, the only XFINITY Series driver to finish in the top five. The next weekend at Phoenix International Raceway, that team upped the ante even more.

Leading a race-high 85 laps in the desert, Allgaier clinched his position into the playoffs winning his first NASCAR race since 2013. It was an emotional, and possible career-high for the JR Motorsports driver, despite battling for a championship in 2016 at Homestead-Miami Speedway.

“The win was huge,” Allgaier told Frontstretch in regards to his season. “At Daytona we got crashed, not of our doing on Lap 29. We didn’t even make it to the end of the first stage. At Atlanta, I got involved in a crash on Lap 2, that was not any of our doing and it basically put us out of contention for the rest of the day. We knew we were a lot stronger than that and we knew that we were a better team than that.”

At Richmond International Raceway, Allgaier led a career-high 157 laps, coming home short of his first career multi-win season due to a late race restart. However, the disappointment of finishing runner-up has not held the No. 7 team up.

Allgaier claimed his first career pole since 2013 at Charlotte, where he led the opening seven laps. Earning stage points in the first stage, the rest of the day he fell under the radar, coming home 12th.  But he leads the series in many categories.

The No. 7 team leads the XFINITY Series with 75 stage points, and playoff points (7), while winning two stages. Over the last handful of races, Allgaier has erased the points defecit that he faced following the first two races, now within six points of championship leader Elliott Sadler.

No! They’ve gone to the teams with the most money and SPONSOR dollars. The regulars don’t have a chance and some don’t even get to race when they show up because a rich kid shows up and steals their money. Good way to get more sponsors for the little guys.