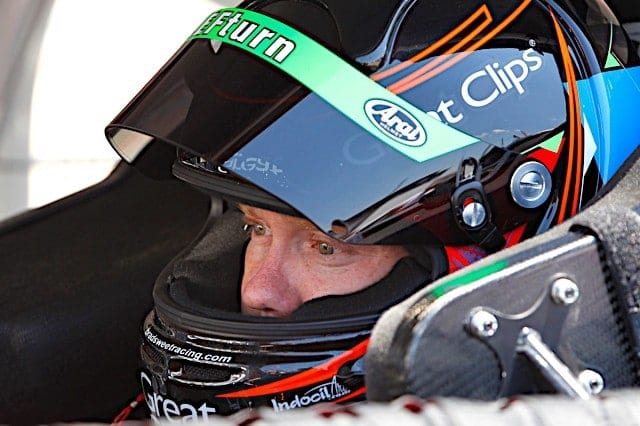 Five years ago, there was a young hotshoe making their way up the ranks of NASCAR, first competing in the Camping World Truck Series before making the jump to the XFINITY Series in 2012.

Sweet’s rise came to a halt following the season-finale race in 2013 at Homestead-Miami Speedway for JR Motorsports, finishing 31st, 25 laps off the pace. Since then, it’s the World of Outlaws Sprint Series where the 31-year-old calls home.

Through 27 races in the 2017 season for Kasey Kahne Racing, Sweet sits third in the championship standings, 94 markers behind Donny Schatz, who competes for Tony Stewart Racing. The No. 49 winged car has two victories, 17 top-five and 23 top-10 finishes.

“Obviously, we want to do better, but we really haven’t hit the heart of the season yet,” Sweet tells Frontstretch. “We had a pretty good start. Donny Schatz and David Gravel are having a little bit better season than us, but we have some good consistency in our cars. We just need to find a little extra speed to pick up some of the wins.”

Consistency was hard to find when Sweet competed in NASCAR. Between 2010 and 2013, he drove for Turner Scott Motorsports and JRM for a combined 36 races, 35 of them coming between 2012 and 2013. His best career finish came at sister tracks, placing sixth at Auto Club Speedway and Michigan International Speedway with two separate teams.

In 2014, the year proceeding Sweet’s departure from JRM, the No. 5 car competed in 25 events, with drivers spanning from NASCAR veterans Kevin Harvick and Kasey Kahne to a trio of young guns in Alex Bowman, Austin Theriault and Josh Berry.

How did the car do? Harvick won four times, leading 616 laps, while Kahne also went to Victory Lane in one of his three starts.

But does Sweet miss NASCAR?

“No, not really,” he says. “Maybe right after I did a little bit, but now that I’ve been doing this [World of Outlaws Spring Series] for three or four seasons, I’ve kind of found my home here and I’m pretty happy doing it.”

Hindsight is always 20-20. Drivers can always reflect upon their results and ask themselves what they could have done better. Sweet is in the same boat as those drivers, as an opportunity to succeed was in the palm of his hands.

“It’s always easier after it’s all done to kind of look back and think about how I would have approached it differently and wish certain things would have worked out,” he says. “I had the opportunity and it didn’t work out. That’s a lot more than most people can say at this point. I know what it’s like to drive a stock car in NASCAR at the elite level against a lot of those great drivers. I would have loved to do a lot better when I was there, but it is what it is.”

Some of the other young drivers who competed with JR Motorsports at one time or another have been Chase Elliott, Cole Whitt and now William Byron. Whitt was in a similar situation as Sweet; in 2012 he was granted a full-time ride, elevating his performance enough to where he could make the jump to the Cup Series for a part-time schedule in 2013. Elliott moved up the ranks quick, spending only two seasons in the XFINITY Series and winning the championship in 2014, his first year in the series.

Those drivers, specifically Elliott, adapted to the circus of NASCAR, which Sweet says is crucial.

“You have to adapt as quick as you can,” Sweet recalls. “There are drivers who adapted a little quicker than me or had better results. Sponsorship is a huge part of that deal, and I had a sponsor that stuck with me for a couple seasons, but didn’t have much results. Honestly, sure, I think I was just getting the hang of it a little bit more in the end, but I just didn’t adapt quick enough. It just didn’t work out.”

Since competing full-time on dirt, Sweet has upped his success. In 2014, he won Rookie of the Year honors for Kasey Kahne Racing, scoring five feature wins.

Sweet’s success started to pile up once he got more experience in the new car. In 2015, he picked up five more victories, with 60 top-10 finishes. His best year came in 2016, winning a career-high eight features, also posting a series-high 13 quick time awards in qualifying.  In each of the past two seasons, the No. 49 team has finished third and fourth in the championship standings.

The success on dirt has made NASCAR seem like an afterthought for Sweet, and a return isn’t really on his mind.

“It would have to be a great opportunity,” Sweet says. “I would always like to go back and prove to myself that I could do it, but I’m pretty happy here. It would have to be full time and know exactly what I was getting in to because it would take a lot to leave what we have going on here.”

I hope he does well. Racing is in his blood and you have to make a living doing what you do best. People close to him have to think about Leffler, Clauson and Steele when they returned to sprint cars.