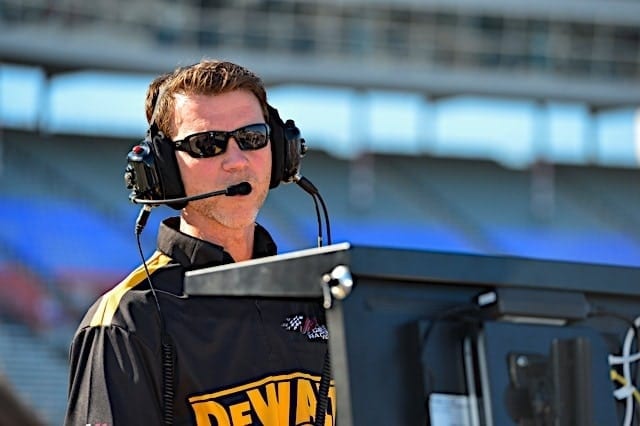 After the longest race of the year, the Monster Energy NASCAR Cup Series heads off to one of the toughest tracks on the schedule.

The concrete high banks of Dover International Speedway tests man and machine thanks to its high banks, high speeds and unique transitions into and out of the corners. The fact the track surface is concrete does not seem to create as much of a challenge to the teams as the loads, both vertical and lateral, that are placed on the car 800 times during the race.

For Tech Talk, Jason Ratcliff, crew chief for Matt Kenseth, discusses the VHT that was utilized at Charlotte Motor Speedway and the overall strength shown by Joe Gibbs Racing last weekend. Then, he looks ahead to Dover, touching base on corner transitions, stress on suspension parts, shocks, tires and the digital dash.

Mike Neff – The topic of discussion all weekend was the VHT. How did it affect the weekend and how did it play out during the race?

Jason Ratcliff – It seemed like it was a bigger factor at the start of the race. After everyone drove through it a few times and worked everything in, I didn’t think it was a big deal. At least it wasn’t for us, it may have been for other teams. After the rain it seemed like everything was kind of normal. I didn’t feel like it was anything that benefited us. It didn’t really change where we were going to race. It wasn’t like we could move up and pick up a bunch of lap time by running through it. It probably affected restarts more than anything, I think.

Neff – What is different about preparing for a concrete track like Dover vs. an asphalt track?

Ratcliff – Dover itself is just unique considering the size of the track and the banking and the radius of the corners. All of those variables play into it as well. It is kind of tough to say what is concrete vs. asphalt. I don’t know that we do anything different there.

Dover is unique all of the way around. It is a special place that we’ve built a pretty good notebook on. It seems to be consistent every time we go back. That is one good thing about it. That surface is fairly predictable, not always. Year after year, unless Goodyear makes a big change in the tire compound or the tire that we’re running on any given weekend, it has been pretty consistent. It has been a good place for us as well.

It is hard to compare concrete to asphalt. If Dover was asphalt I think it would still be wildly different from anywhere else we go (laughs). I don’t know that being concrete makes it unique anymore than the shape of the track or the banking angle. Your corners are so big, it is a one-of-a-kind racetrack, and I like it.

Neff – The corner entry and exit at Dover is very unique. You kind of drop into the corner and launch out. Does that odd transition into the banking create extra stress on components of the suspension compared to a place like Charlotte?

Ratcliff – Yeah, it gives everything a pretty good workout. Typically, if your parts and pieces will make it through Dover, they’ll make it through anywhere. It is hard on stuff. You’re pulling so many lateral Gs and so much wide-open throttle time through the corner, it just sustains a lot of load.

There is a lot of vertical load on corner entry. We see people break parts there every time we go. Somebody breaks something that they run all year, whether it is a chassis piece or part or component, and get to Dover and fail it just because it is so much tougher on stuff. It is something where we have broken a few parts and pieces ourselves, so we are definitely mindful of it.

Neff – Have you experienced a similar decrease in bump stop failure or fatigue with the change to metallic stops and shims since NASCAR started allowing them?

Ratcliff – Oh yeah, one of the most difficult things at Dover throughout the race used to be bump stops. They’d get hot and give up height because they are under so much load. Now that we run the bead bump springs instead of bump rubbers, it is much more predictable throughout the race and it isn’t as heat sensitive and they withstand the loads pretty good.

They’re very repeatable. That has helped quite a bit at Dover. That is one of the things we’d fight really bad there. You’d start the race and everything would be good and you’d get to the closing laps and you’d be on the splitter too hard. It would be bump rubber failure. We don’t really see that anymore.

Neff – With the rapid transition from the straight into and out of the corners, do you have to build significant rebound into the shocks or do you just let it get a little light and make the driver deal with it?

Ratcliff – It depends on the spring package you run. There are a lot of other things that play into it to determine what type of shock package you want for a particular setup. It isn’t wildly different. It is a very shock-sensitive track. It seems like we can make a few shock changes and really move the needle, where at some tracks that isn’t the case. From a rebound standpoint, it isn’t like we run any more or less than we do at any other tracks. It is the same thing. We’ll tune on it based on the setup and driver feedback, what he needs.

Ride quality plays a role, too. All of those grooves and seams in the concrete can sometimes play havoc when you build up your air pressures. So getting the car to ride through that nice and comfortable for 60 or 70 laps is key as well when you’re looking at shock packages.

Neff – How much of a variance in spring rate do you get in the sidewalls of the tires from one week to the next with the tires that Goodyear brings to the race track?

Ratcliff – It isn’t a huge variance. Typically the tire data we get heads us in the right direction if there is a major change in spring rate. For any given air pressure, it seems like the spring rate is fairly close. If you are OK in the previous race, even if they change the tire, you’re not going to be that far off when it comes to tire spring rate.

Neff – You’ve been working with the digital dash for a little over a year. Have you thought much at all about those in the last six months or is everything pretty well ironed out with those and you just take them from one week to the next?

Ratcliff – I didn’t even realize it had been a little over a year (laughs) until you mentioned it. It just seems like the normal thing now. I don’t know that anybody knows anything different at this point. The first few months we had the dash there was a lot of experimental dash setups and things we were learning about the dash and what the driver wanted to see. What do you make big, what do you make small, where do you put it, what is important, what isn’t. Now it is pretty much old hat.

We run the same configuration every week. You kind of customize it for a driver and he wouldn’t know any different. Right now, if we went back to the old dash, that would seem really odd. Even though it has only been a few short months removed, the digital dash has kind of grown on us.