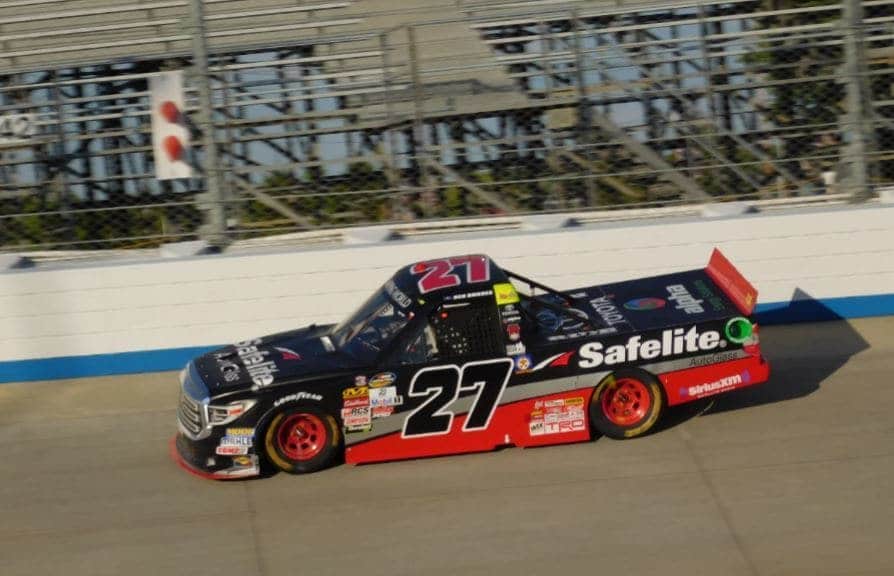 At the beginning of the final stage, Ben Rhodes found himself in familiar territory in NASCAR’s Camping World Truck Series. Restarting as the race leader, it appeared a first victory would finally be within his grasp.

But Rhodes’ road to Victory Lane took yet another detour in a frustrating 2017 season for the driver. Rhodes and crew chief Eddie Troconis were on a different pit strategy than half the lead-lap cars, part of their move to the front. Thus, he had to pit with over 30 laps to go, while eventual race winner Johnny Sauter stayed out to try to stretch his fuel to the finish.

The plan of hoping everyone would have to pit again came to a crashing halt with 29 laps to go when Chase Briscoe lost his right front tire, bringing out the yellow flag. Rhodes was caught a lap down and his chances for victory were over. He got the free pass, placing him back on the lead lap but never got up front again.

“It was all about track position today, but man, we had such a fast truck,” Rhodes said post-race. “I wish we could have brought it home in Victory Lane for these guys, get them their first win and my first win. We’ve had awesome performances all season long, but we seem to always come up short. We were very conservative in today’s race.”

Rhodes had to start behind all the trucks on track and brought the No. 27 truck home fourth, tying a season best that he also set at Atlanta Motor Speedway.

Toward the end of the race, Rhodes got within one second of Sauter and Kaz Grala, who were battling for the race lead. That’s where he saw another victory slip away, a near-miss that’s tough for the 20-year-old after recent oh-so-close moments have haunted him this season.

Rhodes, though took the disappointment in stride.

“We were playing it easy because we know points are going to take care of us,” he said. “We need to get back up there in the championship, especially with all these Cup guys that come into our series. It’s just a matter of time, we’ll get them [victories].”

Rhodes has two finishes of 20th or worse, coming at Martinsville Speedway and his worst result of the year (23rd) came at Kansas Speedway. That’s the place where he also saw a first career victory slip out of his hands, blowing an engine while leading with eight laps to go. But that’s a mistake the team had no control of.

Rhodes knows that if he continues to run up front, the victories will come. He just may need to ride the wave of racing luck until the tide turns back in the right direction.

“I came into this race not feeling too good about it,” Rhodes said. “We came back this year and we learned. I was super conservative, more conservative than any track I’ve ever been to. I think that speaks volumes we made ourselves super tight. We purposely made ourselves a top-five truck, not hanging it sideways to go for the pole and the win here.”