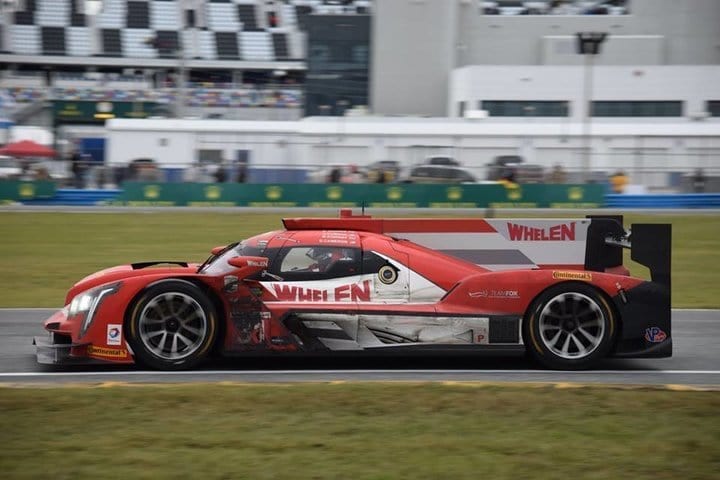 In the afternoon session, the speed shown by Action Express Racing continued to be shown to the masses.  This time, it was Dane Cameron, fresh off of two victories last weekend at Lime Rock Park, who was fastest overall.

Cameron turned in a lap of 83.058 seconds (101.567 mph) to top the charts.  Cameron’s lap was one-sixth of a second quicker than teammate Christian Fittipaldi in the No. 5 Mustang Sampling-sponsored Cadillac DPi-V.R.  Wayne Taylor Racing’s Ricky Taylor was third fastest, a little more than a third of a second off of Cameron.  Visit Florida Racing’s Renger van der Zande was fastest of the LMP2-spec prototypes in fourth, while Mazda Motorsports’ Joel Miller was fifth fastest.

In Prototype Challenge, it was once again Patricio O’Ward who was fastest with a lap of 85.927 seconds (98.456 mph), good enough for ninth overall.  The lap was 1.925 seconds faster than Bruno Junqueira in BAR1 Motorsports’ No. 26.

Finally, Stevenson Motorsports’ Lawson Aschenbach was fastest in GT Daytona in his Audi R8 LMS GT3.  Aschenbach’s lap of 90.352 seconds (93.634 mph) was just under a tenth of a second quicker than SunEnergy1 Racing’s Tristan Vautier in the No. 75 Mercedes.  Michael Shank Racing with Curb-Agajanian’s Katherine Legge was third quickest in the No. 93 Acura, followed by Riley Motorsports’ Jeroen Bleekemolen.  3GT Racing’s Scott Pruett rounded out the top five.

The session was not exactly clean.  Once again, there were two red flags in the 90-minute session.  The first came when O’Ward went into the runoff at turn 6.  The No. 38 PC entry left some debris behind, necessitating a cleanup.  Later on, Tomy Drissi stopped the No. 26 PC entry in turn 9 with fluid coming out of the car.  The absorbent material was required.  The stoppage occurred a couple of minutes after Drissi had spun the car.

Qualifying for Saturday’s Chevrolet Sports Car Classic is due to start at 4:55 p.m.  The session will be streamed live at both IMSA.com and FansChoice.tv.