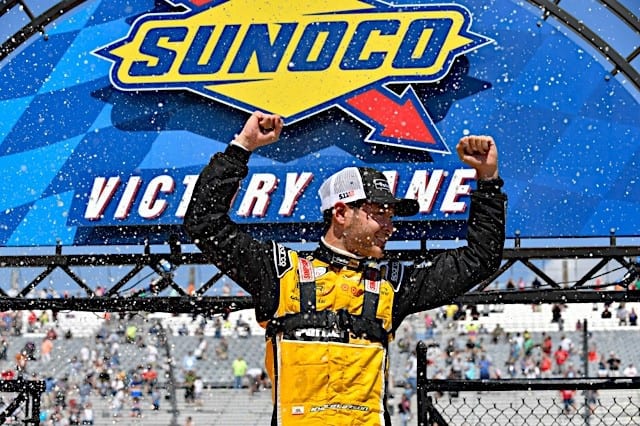 Though Miles the Monster was a tough one in Saturday’s OneMain Financial 200 (with 10 cautions to boot, the most in 10 years) Kyle Larson did not blink. The Cup regular drove away from Daniel Suarez and Ryan Blaney to earn his eighth career XFINITY Series win and third of 2017.

Starting from the pole, Larson went on to lead the most laps of the race, 136, while scoring his first career victory at Dover International Speedway.

“I knew our car was going to be really good,” Larson said. “We got the pole, I was able to lead a lot of laps. I would start the runs off tight. We had a bunch of cautions and I got looser and looser. I was happy to see a long run finally, knew I would be good on one of those.”

That long run at the end made the difference for Larson, as that flurry of yellow flags disappeared for the final 60 laps of the race. He asserted control, taking the lead on Lap 147 and never looked back.

Blaney, who slowly inched his way closer to Larson in the final 50 laps, lost headway when he broke loose in turn 4 with six laps to go. Coming home second, he was unable to end the winless streak for the No. 22 Team Penske Ford, which hasn’t won in NASCAR’s XFINITY Series since Texas in the fall of 2015.

“I think we are really close,” Blaney said. “It’s just a matter of closing that little gap. It’s been fun to be a part of that progression. Honestly, we want to be winning races annually, but you have to put the work in. A little more is what we need.”

Suarez held a healthy lead at one point in the event but was the victim of the race’s final lead change when Larson got by with 53 to go. Still, a third-place run ties his best finish of 2017.

Cole Custer and Ryan Reed, who each earned their second top fives of the season, came home fourth and fifth, respectively.

“This is definitely a good thing for our race team,” Byron said. “Hopefully, this is something we can build on. To see the execution in the race and get there at the end – I know we got off cycle but we were still able to charge through on new tires. For JR Motorsports, it shows the strength in our teams to execute.”

Those six drivers skated through this 200-lapper incident free. Behind them? It was a wild afternoon.

With seven cautions in the first half of the race, Austin Dillon, Brandon Jones, and Ryan Sieg, among others got into the wall.

Meanwhile, the stage breaks on Laps 60 and 120 led to a couple of key moments in the race highlights. Blaney caught then-leader Larson in turn 4 and drag-raced to the line for a Stage 1 win. The same dramatic ending occurred in Stage 2, when Darrell Wallace Jr. gave a bump-and-run to the No. 22 to take the playoff point.

Further back, Brandon Brown scored a career-best effort in 17th.

That isn’t NO SURPRISE ANOTHER CUP DRIVER WINNING THE RACE. The only thing that happened with the new rules is that Kyle Busch isn’t winning all the races, but what’s the difference the CUP Drivers are still dominating races, HOW PATHETIC …………… REALLY SICK OF THIS SH*T !!!!!!!