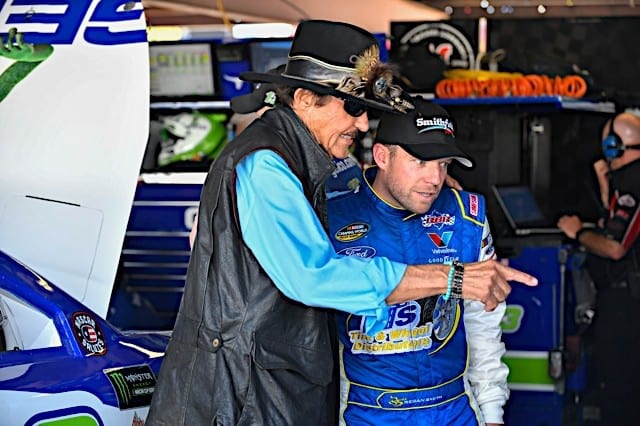 Following a savage crash by Aric Almirola at Kansas Speedway three weeks ago, Richard Petty Motorsports’ lone driver was out of the picture. His replacement? Regan Smith.

That was the choice as the 33-year-old Almirola heals from a compression fracture to his T5 vertebra. Smith, without a full-time ride got the nod to return to the Monster Energy NASCAR Cup Series starting in the Monster Energy Open two weeks ago at Charlotte Motor Speedway.

Finishing fourth in that non-points event, Smith showed it’s not his first time bring thrown into a Cup ride unexpectedly.

“You have to know that the team also has goals,” Smith said of capitalizing on these opportunities. “They don’t want you going out and wrecking all their cars and doing something stupid. You need to accomplish what they want to accomplish and help them continue to learn.”

Making his first points start of 2017 last week in the Coca-Cola 600, Smith returns this weekend at Dover International Speedway, starting 30th for Sunday’s AAA 400. It’s been a slow, steady transition to his new fill-in role, one where both sides continue to learn about each other.

“The biggest difference is that I’m familiar with the car a little more,” he said this week. “I know where all my switches are, things I need to know and what I need to do with them throughout a run.”

The role remains race-to-race at this point as RPM works through its long-term plans. Through this quick transition, Smith recently spoke with Almirola at Charlotte, saying he seemed like himself.

“I saw Aric last week, spoke to him for a little while,” he said. “He was in good spirits. It sounds like he’s feeling a little better. I can’t speak to the injury because I don’t know a whole lot about it but he was definitely in good spirits. He seemed like Aric.”

Subbing is a role Smith has mastered over the last five years. Replacing Dale Earnhardt Jr. for two races in 2012, Smith filled in during 2014 for Tony Stewart at Watkins Glen before doing the same for Kyle Larson and Kurt Busch in 2015. He’s even run the No. 48 for Jimmie Johnson in qualifying.

Many would assume this latest effort shows Smith is out to prove himself toward a full-time, competitive Cup ride in 2018.

There may be some truth in that. But the 33-year-old, knowing the role of a sub always puts the team first.

“It can definitely happen,” he said. “It’s just a situation where you have to go out and do what you can every week to make somebody say, ‘Hey, that guy should be out there all the time.'”

Smith hasn’t been out of a racecar long. He has been competing for small-time Ricky Benton Racing in the Camping World Truck Series, finishing seventh in Saturday’s event at Dover. Additionally, Smith is hot off a full-time Cup season in 2016, earning one top five and two top 10s for Tommy Baldwin Racing.

However, just a few short months out of a Cup car can make a big difference.

“I feel like everything changed,” Smith said. “It’s a completely different rules package, a lot of difference with how they drive, how they react. I’m doing what I can to catch up on that as quick as I can. There are may be some things I didn’t anticipate up to this point. With that said, it’s still a racecar. You go out and figure out how to make it do what you want it to do and go from there.”

With three straight runs for the XFINITY Series championship with JR Motorsports from 2013 to ’15 it’s no mystery Smith is a talent in the national divisions of NASCAR. With another opportunity to race in the Cup ranks, Smith is confident that a fill-in driver can earn a full-time ride through sheer performance.

I find it surprising that the King would take on Smith instead of maybe putting a young prospect into that car. Smith is a washout from Cup and an also ran in Xfinity, his day came and went. Both Busch and especially Truex proved that Furniture Row was a better team than Smith was showing them to be. I’d rather see a young guy get a Cup ride and gain some experience. Might also pay off for Petty down the road. For sure Smith is not going to do much with Petty’s stuff.

They asked Carl Edwards in taking the ride and he said no. I would have loved to have seen what he could have done in the car.